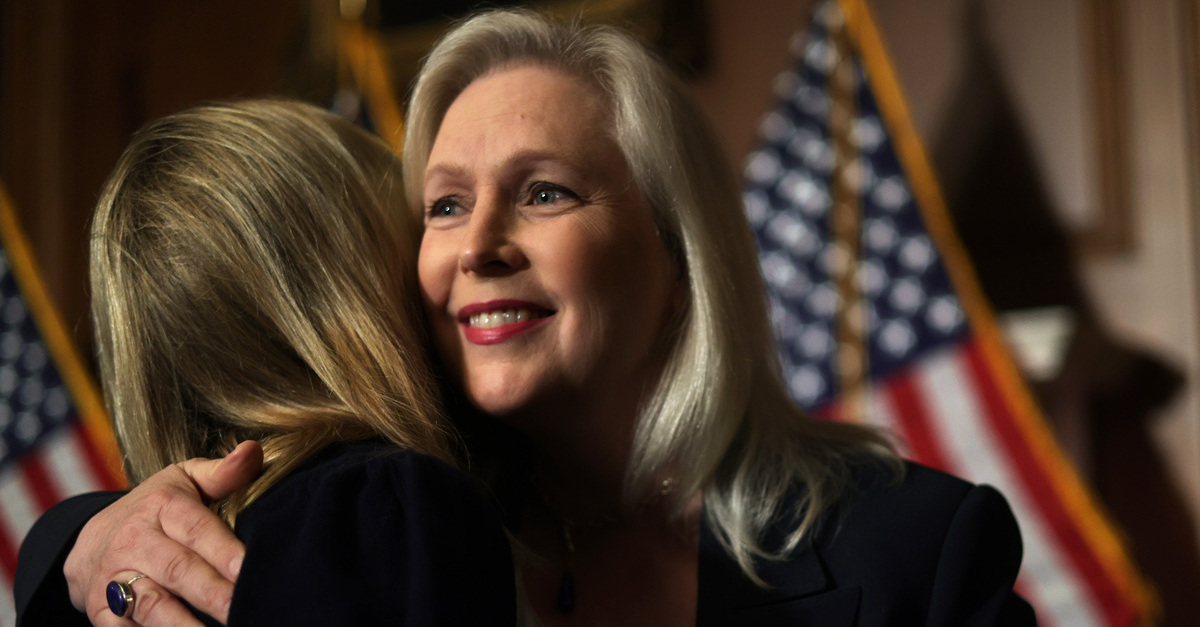 Former Fox News anchor Gretchen Carlson (L) receives a hug from U.S. Sen. Kirsten Gillibrand (D-NY) (R) during a news conference at the U.S. Capitol on February 10, 2022 in Washington, DC. The senator held a news conference to discuss the passage of the Ending Forced Arbitration of Sexual Assault and Sexual Harassment Act.

The U.S. Senate on Friday unanimously passed a bill to end forced arbitration in sexual assault and sexual harassment cases. The U.S. House of Representatives passed the Ending Forced Arbitration of Sexual Assault and Sexual Harassment Act of 2021 earlier this week. The bill will subsequently head to President Joe Biden’s desk where he is expected to sign the landmark legislation.

“This is among the largest workplace reforms, certainly in our lifetimes,” Sen. Kirsten Gillibrand, (D-N.Y.), told NBC News.

The practice of forced arbitration is a legal-adjacent, quasi-legal or legally-undergirded concept that means exactly what it sounds like.

In instances where someone has a grievance that might otherwise be settled in a lawsuit (via the legal system), certain contractual language will often purport to remove that generally-applicable remedy and replace it with a mandatory, or forced, system of third-party decision-makers. These arbiters perform some activities that are akin to how the judiciary works. They accept evidence, hear testimony from the sides in a dispute, hold hearings (both process- and merit-specific), look at relevant documents, consult legal advisors, and so on.

Differences across various U.S. jurisdictions are enormous and several different forms of arbitration exist. Some arbitration bodies are comprised of an agreed-upon mediator or mediators chosen by the participants. Other times, and frequently, an organization like the American Arbitration Association will already be singled out in contractual language and will basically do all the pre-tribunal work.

Each arbitration ends with an “award” that may or may not be monetary in nature–essentially the equivalent of a judgment in civil court. Such awards are binding on the parties involved in the arbitration and, belying the quasi-legal nature of this secondary system of dispute resolution, typically enforceable through the courts.

Since the #MeToo movement, however, there has been a relentless push by advocates to end the practice of forced arbitration–seeing the prospect of cutting off access to the actual court system as a genuine and concrete example of a power imbalance by wealthy and powerful people and corporations. Nothing hammered home the concept as in situations involving sexual assault, a crime with severe penalties, and sexual harassment, a tort with substantial penalties.

Law&Crime’s Elura Nanos explained the issue in an opinion editorial about shifting corporate practices from early 2018:

Arbitration clauses are common in many contracts – and are by no means universally bad; arbitration often provides a faster and cheaper way for an employer and employee to settle a dispute. In the context of mandatory arbitration clauses, though, it’s not the arbitration that is the problem – it’s the “mandatory.” Given the nature of sexual harassment and assault generally, rules requiring secrecy aren’t universally a good idea. For every victim who is humiliated, pressured, demeaned, or assaulted, there are ten others who may be next. Forcing victims to remain silent risks the personal safety of others.

At the time, Uber and Lyft had just ended mandatory arbitration for riders and employees. In late 2017, federal legislation was first introduced to ban forced arbitration in cases of sexual harassment.

Several years later, sexual harassment and assault allegations are now precluded from being enforced in forced arbitration provisions. The law will not bar individuals from choosing arbitration if they so desire.

A more comprehensive version of the bill was advanced by the House Judiciary Committee late last year. The Forced Arbitration Injustice Repeal (FAIR) Act would have ended forced arbitration entirely.

Ultimately, congressional Democrats limited the reach of the legislation in order to obtain widespread GOP support.