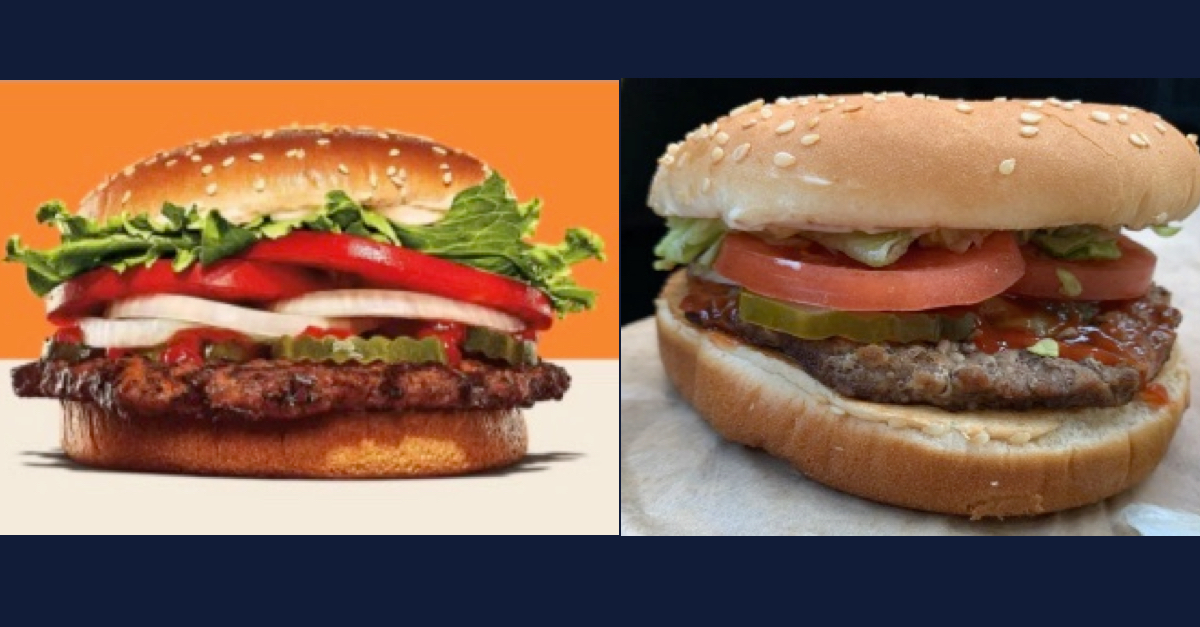 Four fast-food fans have sued Burger King, alleging in a class action complaint that the international chain’s misleading advertisements cheated them out of the burgers they thought they were getting.

Walter Coleman, Marco DiLeonardo, Matthew Fox, and Madelyn Salzman are leading a class action lawsuit against Burger King on behalf of anyone who “purchased a Burger King menu item based on false and misleading advertising concerning the size and/or the amount of ingredients contained in said menu item.”

The complaint was filed in federal court in Florida, where plaintiff Coleman lives and where Salzman is a part-time resident. DiLeonardo and Fox live in New York.

According to the lawsuit, filed by attorney Anthony J. Russo, Burger King began to “materially overstate the size of its burgers in its advertisements in 2017.”

The complaint alleges that the updated ads featured a burger that was 35% bigger, appearing to show a burger patty twice the size of those featured in pre-2017 advertisements, although “the recipe or the amount of beef or ingredients contained in Burger King’s Whopper has never changed.”

The result, according to the complaint, is that consumers—already feeling the pain of inflation—are suffering.

“Burger King’s advertisements for its burger and menu items are unfair and financially damaging consumers as they are receiving food that is much lower in value than what was promised,” the complaint says. “Burger King’s actions are especially concerning now that inflation, food, and meat prices are very high and many consumers, especially lower income consumers, are struggling financially.”

The fast-food chain “materially overstates the size of nearly every menu item in its current advertisements,” the complaint says.

But customers aren’t the only ones losing out to Burger King’s alleged false advertising.

Other major fast food chains are also victims, according to the lawsuit.

Citing online reviews and social media posts, the complaint says that Burger King “promises large portions of food to steer consumers to Burger King for their meals and away from competitors that more fairly advertise the size of their burgers and menu items, unfairly diverting millions of dollars in sales that would have gone to competitors.”

“Should have went [sic] to @Wendys,” said one dissatisfied customer on Twitter. 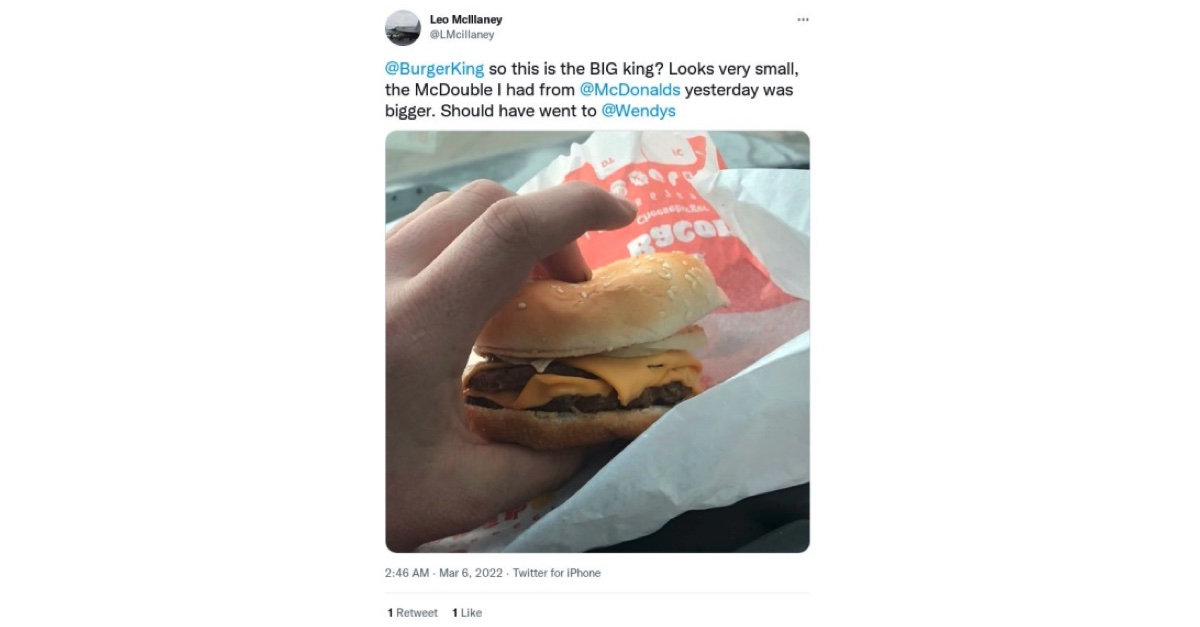 According to the complaint, Burger King has a history of misleading would-be customers in its ads.

“Approximately 12 years ago, Burger King was ordered to stop advertising overstated burgers by the Advertising Standards Authority (“ASA”), the United Kingdom’s regulator of advertising,” the complaint says. The ASA, after examining the burgers “in the hands of an average-sized man” and considering that the burgers “did not fill the hands to the same extent” as the burger in the advertisement, ultimately concluded that “‘the visuals in the advert were likely to mislead viewers as to the size and composition of the product.'”

The plaintiffs are asking for unspecified monetary damages and an order that either blocks Burger King from selling the menu items, or to “correct the deceptive behavior.”

“The suit aims to get Burger King and other fast food chains to advertise their menu items in a way that reflects reality,” attorney Russo told Law&Crime in an email. “We are ultimately seeking changes to the photos for the materially overstated menu items and fairness across the industry on the issue.”

Attorneys for Burger King did not immediately reply to Law&Crime’s request for comment.

You can read the complaint, below.