CIA, Mike Pompeo Sued for Alleged Surveillance of Lawyers, Journalists, and Others Who Visited Julian Assange in Ecuadorian Embassy 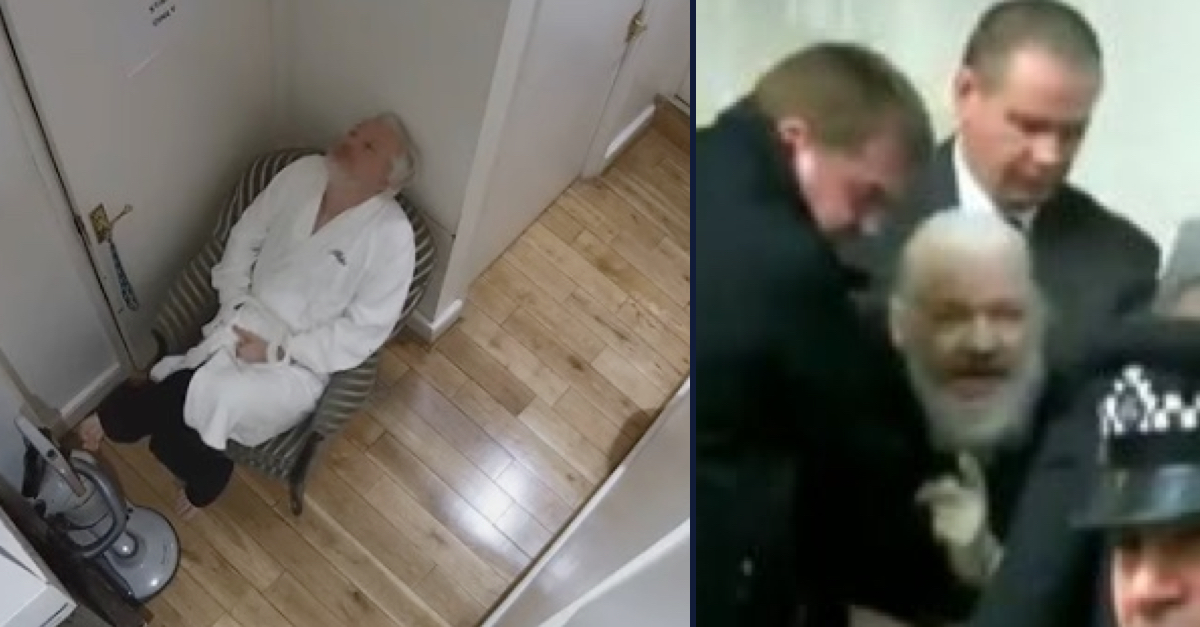 U.S. intelligence officials conducted surveillance on lawyers, journalists, and others who visited WikiLeaks founder Julian Assange in 2017 and 2018 as he evaded international authorities by staying inside the Ecuadorian embassy in London, according to a new lawsuit.

In a 13-page complaint filed Monday, attorneys for Margaret Ratner Kunstler and Deborah Hrbek, both New York-based lawyers who worked with Assange, and journalists John Goetz and Charles Glass, say that their electronic devices were seized and copied during their visits with Assange, and that the information was provided to the CIA.

Attorney Richard A. Roth said that his clients were subjected to actions carried out “under cover of law” that violated their Fourth Amendment protections against unreasonable search and seizure.

Beginning in or about January 2017 and continuing until the Ecuadorian government terminated UC Global’s contract in or about April 2018, Defendant Pompeo approved, and UC Global implemented, an extensive surveillance program which: (a) converted video surveillance of Assange to audio-video surveillance by placing hidden microphones on new cameras; (b) placed hidden microphones inside the Embassy and switched out recordings that were downloaded twice monthly and given to the CIA (c) ensured that the CIA could in real time be able to directly observe and listen to Assange’s daily activities at the Embassy; (d) surreptitiously copied and took images of the passports, including pages with stamps and visas, of all visitors; and, as most relevant here, (e) seized, dismantled, imaged, photographed and digitized the computers, laptops, mobile phones, recording devices and other electronics brought into the Embassy by the plaintiffs, including but not limited to IMEI and SIM codes, fronts, backs and insides of visitors’ devices, downloaded stored material (collectively, “Illegally Seized Material”), thereby invading Plaintiffs’ privacy without notice, authorization or consent.

According to the lawsuit, the deal with UC Global was the result of a meeting between Morales and security personnel at a Las Vegas hotel during the Shooting, Hunting and Outdoor Show, also known as the SHOT Convention, in January of 2017. (The complaint refers to the convention taking place at the “Las Vegas Sands Hotel,” although it appears to have been held at the Venetian Resort, which is owned by the Las Vegas Sands corporation.)

“While at the SHOT Convention, Morales introduced himself as the CEO of UC Global, describing the company as the private security firm that was responsible for security at the [Ecuadorian] Embassy,” the complaint says. “Security personnel employed by LVS (which was owned by a prominent American businessman, now deceased) spoke with Morales during the SHOT Convention and recruited Morales and UC Global to conduct surveillance on Assange and his visitors at the Embassy on behalf of the CIA. Morales agreed.”

“Security for the Sands LVS had cooperated with the CIA on similar matters in the past,” the complaint adds.

The “prominent American businessman, now deceased” who owned the Las Vegas Sands hotel at the time was Sheldon Adelson, a prominent — and vocal — Donald Trump ally and supporter.

The complaint noted that former UC Global employees have said that the deal with the agency “included selling information obtained through the illegal surveillance of Assange to the CIA.”

According to the complaint, UC Global copied visitors’ devices, which included “confidential and privileged information and documents from or about: (a) the Plaintiff journalists’ confidential sources; and (b) the Plaintiff attorneys’ clients.”

That information was ultimately given to the CIA, the complaint alleges.

“Further, UC Global as agents of the CIA, recorded conversations between and among Assange and the Plaintiffs herein as well as those of his many other visitors and finally transmitted the fruits of such recordings and the Illegally Seized Material to Morales’ CIA handlers in the United States,” the complaint says, adding that the information was sent to Las Vegas, Washington, and New York by Morales personally, and, in some cases, “placed on an FTP server at UC Global offices which provided external access to CIA personnel, agents and/or contractors in the United States.”

The complaint says that in the three years following the SHOT convention, Morales, who is based in Spain, traveled to the U.S. more than 60 times, apparently awaiting orders from Sands security.

“There, Morales received instructions from CIA agents and intermediaries from the LVS Security Department in Washington D.C. metropolitan area, New York City, and in The Venetian Hotel in Las Vegas, which instructions were sent to UC Global personnel from US servers,” the complaint says.

The complaint says that Pompeo was directly involved; Trump appointed him as CIA director in April 2017,

“Defendant Pompeo was aware of and approved the copying of information contained on Plaintiffs’ mobile electronic devices and the surreptitious audio monitoring of their meetings with Assange,” the complaint says. “That the surveillance of Assange and his visitors was orchestrated by Defendant Pompeo without the permission or knowledge of the Ecuadorian government, which has confirmed it did not order or authorize UC Global to institute enhanced surveillance of Assange.

In a press release Monday, Kunstler said that the alleged actions taken against her and the other plaintiffs endanger members of the press worldwide.

“If a foreign journalist can be prosecuted for publishing factual documents, then no journalist is safe,” Kunstler said in a press release on Monday. “And apparently Mike Pompeo believes that attorneys representing journalists should not be safe either. These actions are outrageous.”

The plaintiffs are seeking a jury trial to determine compensatory and punitive damages “for the blatant and baseless violations of their constitutional rights.” The lawsuit also seeks an order blocking the CIA “from utilizing or revealing to any third party the content of those private communications seized during their unlawful and unauthorized intrusions into Plaintiffs’ electronic equipment and for the records to be purged from the CIA’s system.”

The CIA declined Law&Crime’s request for comment. Efforts to reach Pompeo and Morales were unsuccessful.

Assange is currently being held in London, awaiting extradition to the U.S.