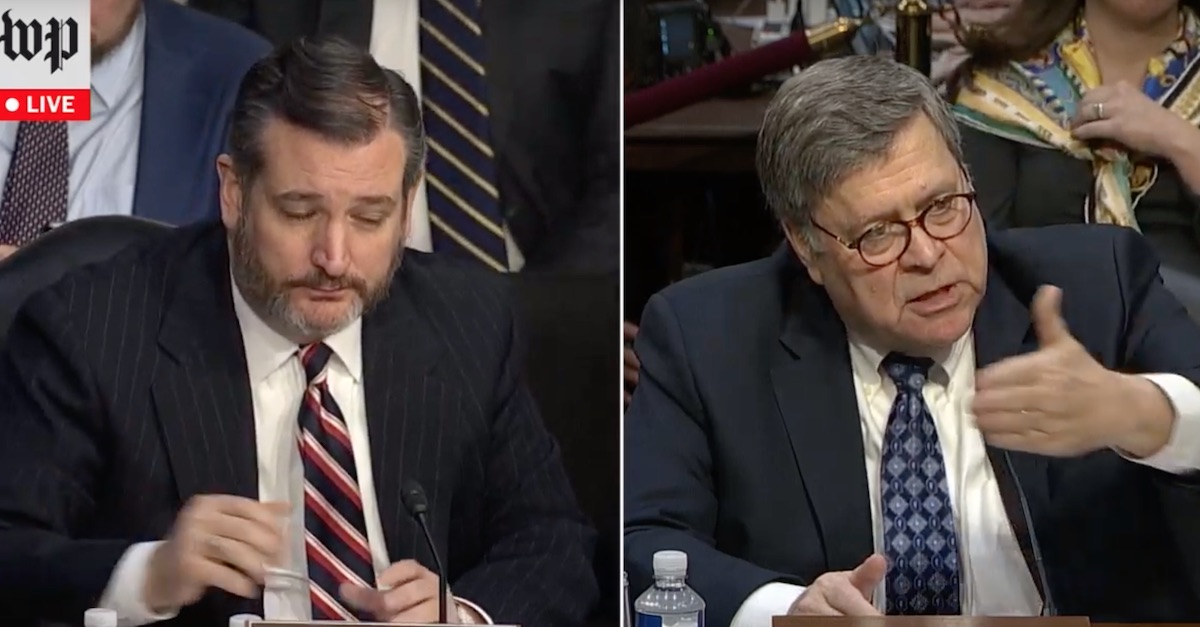 U.S. Attorney General nominee William Barr’s confirmation hearing has mostly gone as expected, but here and there, little exchanges have grabbed attention. One such exchange came when Barr was asked about the subject of recusal in the context of Special Counsel Robert Mueller‘s Russia investigation.

As recent history shows, former AG Jeff Sessions recused himself from the Russia investigation and offered a justification for it. Sessions recused himself by citing Title 28, Chapter I, Section 45.2 of the Code of Federal Regulation (CFR) — “Disqualification arising from personal or political relationship.” Sessions stated that he had to recuse himself from the heading up the Russia probe because he served as a campaign advisor for the Trump campaign.

Both Barr and current acting AG Matthew Whitaker have brought a history of comments about the Mueller probe to the table, but neither of them appear to have met the major criteria requiring recusal. In Whitaker’s case, there was much ado about his declining to recuse himself, despite an ethics official consulted on the situation determining that recusal was a “close call.” That official also said that if Whitaker did seek a formal recommendation, they would have recommended that he should recuse himself from the Mueller probe out of an “abundance of caution” given the “appearance” of a conflict of interest.

Leahy asks if William Barr will seek and follow the advice of DOJ ethics officials on whether he must recuse himself from the Mueller investigation.

Barr says that he will seek out their advice "but under the regulations, I make the decision."

Barr was asked today about recusal — specifically whether he will seek and follow DOJ ethic officials’ advice on the matter. Here’s what Barr said:

I will seek the advice [of ethics officials], but under the regulations, I make the decision as head of the agency as to my own recusal. At the end of the day, I would make a decision in good faith based on the laws and the facts that are evident at that time.

Why won’t Barr commit to follow the advice of ethics officials, as Jeff Sessions and Eric Holder committed to do? https://t.co/ogzn3q94g9

Barr’s commitment to seek but not necessarily follow the advice of ethics officials is the Whitaker standard and falls short of what Holder, Sessions, Rosenstein, and Yates all committed to – to follow that advice. It’s obviously deliberate that he’s breaking precedent.

Attorney Walter Shaub, the former director of the United States Office of Government Ethics, took the criticism a step further. He said Barr was “wrong” to say that he “could ignore ethics officials.”

That says that “the agency designee may make this determination on his own initiative or when requested by the employee’s supervisor or any other person responsible for the employee’s assignment.”

(For lawyers out there, I note that a literal reading of the language of 2635.502(c) might suggest it applies only when a person with whom he has a “covered relationship” is a party, but OGE has interpreted that paragraph to apply to the catchall provision at 2635.502(a)(2).) /2

We’ve seen 2635.502 pop up before. Previously, the non-profit government ethics watchdog Citizens for Responsibility and Ethics in Washington (CREW) argued that Matthew Whitaker violated the Standards of Conduct by not recusing himself despite being advised to do so due to “appearance of a conflict.”

As is the case with Barr, either the employee or an agency official can determine that recusal is required, despite Barr’s suggestion that he would make his own determination.