Amanda Knox Slams Matt Damon Movie Stillwater: ‘Does My Name Belong to Me?’ 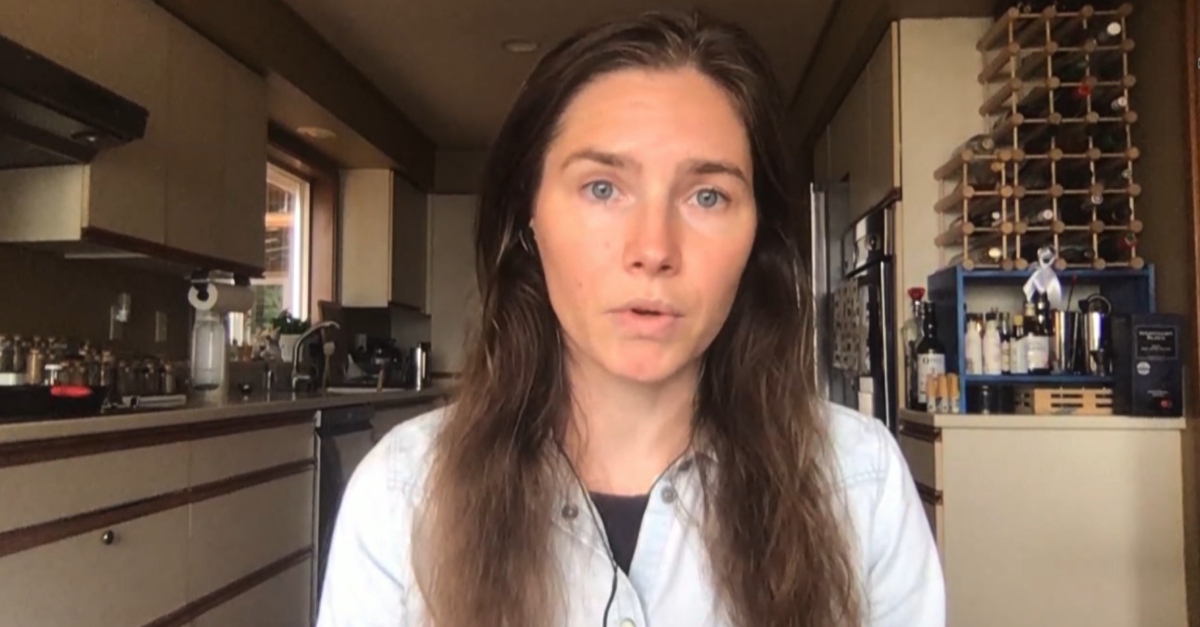 Amanda Knox, who was convicted of murder while studying abroad in Italy and spent nearly four years in prison before being exonerated by that nation’s highest court, shared some highly critical thoughts on Twitter about the upcoming Matt Damon movie Stillwater.

Does my name belong to me? My face? What about my life? My story? Why does my name refer to events I had no hand in? I return to these questions because others continue to profit off my name, face, & story without my consent. Most recently, the film #STILLWATER.

“Does my name belong to me?” Knox begins. “My face? What about my life? My story? Why does my name refer to events I had no hand in? I return to these questions because others continue to profit off my name, face, & story without my consent. Most recently, the film Stillwater.”

I want to pause right here on that phrase: “the Amanda Knox saga.” What does that refer to? Does it refer to anything I did? No. It refers to the events that resulted from the murder of Meredith Kercher by a burglar named Rudy Guede.

In 2007, Knox was a 20-year-old American student studying in Perugia, Italy, when her British roommate, Meredith Kercher, 21, was found murdered in their apartment. Knox, along with two others, were found guilty of Kercher’s murder, and she spent nearly four years in an Italian prison.

In 2011, Knox’s conviction was overturned on appeal, but in 2013, the acquittal was overturned, and Knox faced another trial. She was again convicted, but in 2015 was exonerated on appeal by Italy’s highest court. Rudy Guede, whose DNA and bloody fingerprints were found in Kercher’s bedroom, was convicted and ultimately sentenced to 16 years in prison; as of December 2020, he was released from prison, after an Italian court ruled that he could complete his sentence doing community service.

In Stillwater, which arrives in theaters on Friday, an Oklahoma father, played by Damon, goes to Marseille, France, where his daughter is serving time for a crime she says she didn’t commit: murdering her girlfriend. According to multiple media reports, the film’s director, Tom McCarthy, has said the movie is based, at least in part, on Kercher’s murder, and Knox’s alleged involvement.

Knox said that to repeatedly put her at the center of the story of Kercher’s death is not only inaccurate, but it also serves to distract from the murder victim herself.

This focus on me led many to complain that Meredith had been forgotten. But of course, who did they blame for that? Not the Italian authorities. Not the press. Me! Somehow it was my fault that the police and media focused on me at Meredith’s expense.

The result of this is that 15 years later, my name is the name associated with this tragic series of events, of which I had zero impact on. Meredith’s name is often left out, as is Rudy Guede’s. When he was released from prison recently, this was the NY Post headline. pic.twitter.com/5wgg0YUj59

I would love nothing more than for people to refer to the events in Perugia as “The murder of Meredith Kercher by Rudy Guede,” which would place me as the peripheral figure I should have been, the innocent roommate.

Knox, after acknowledging that she would likely never escape people referring to Kercher’s murder as the “Amanda Knox saga,” listed multiple examples of what she believes are grave misrepresentations in the media, noting that in most cases, she was not interviewed or consulted, even when her name was directly invoked in promoting the material.

Malcolm Gladwell’s last book, Talking to Strangers, has a whole chapter analyzing my case. He reached out on the eve of publication to ask if he could use excerpts of my audiobook in his audiobook. He didn’t think to ask for an interview before forming his conclusions about me.

Knox then invited both Damon and McCarthy to appear on her podcast, Labyrinths.

I extend the same invitation to Tom McCarthy and Matt Damon, who I hope hear what I’m about to say about #STILLWATER.

If her Twitter thread is any indication, Knox won’t back down from her criticisms of Stillwater, especially after the director invoked her name in interviews as the jumping-off point for the story.

I continue to be accused of “knowing something I’m not revealing,” of “having been involved somehow, even if I didn’t plunge the knife.” So Tom McCarthy’s fictionalized version of me is just the tabloid conspiracy guilter version of me.

By fictionalizing away my innocence, my total lack of involvement, by erasing the role of the authorities in my wrongful conviction, McCarthy reinforces an image of me as a guilty and untrustworthy person.

And with Matt Damon’s star power, both are sure to profit handsomely off of this fictionalization of “the Amanda Knox saga” that is sure to leave plenty of viewers wondering, “Maybe the real-life Amanda was involved somehow.”

Knox ended the thread by saying that she will not stop challenging movies, books, and other forms of media that appear to capitalize off of her experience.

I have not been allowed to return to the relative anonymity I had before Perugia. My only option is to sit idly by while others continue to distort my character, or fight to restore my good reputation that was wrongfully destroyed.

It’s an uphill battle. I probably won’t succeed. But I’ve been here before. I know what it’s like facing impossible odds.