All Talk? Trump Threatens to Sue Cruz For 5th Time. . . And Counting 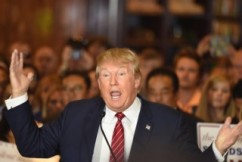 Republican Presidential frontrunner Donald Trump made another audacious claim today regarding Senator Ted Cruz’s “lies” during Saturday night’s Republican Debate on CBS. Trump said, once again, he will sue Cruz if he doesn’t “take down his false ads and retract his lies.” But will he really? This is not the first time Trump has made an inflammatory threat of litigation over Cruz’s Canadian-birth and the question of whether Cruz is a “natural born citizen.” In fact, he has made repeated threats. How many? LawNewz.com went digging to find out:

Well so far no suits, real or fake, from Trump himself, which makes you wonder whether Trump is all political bark with no legal bite.