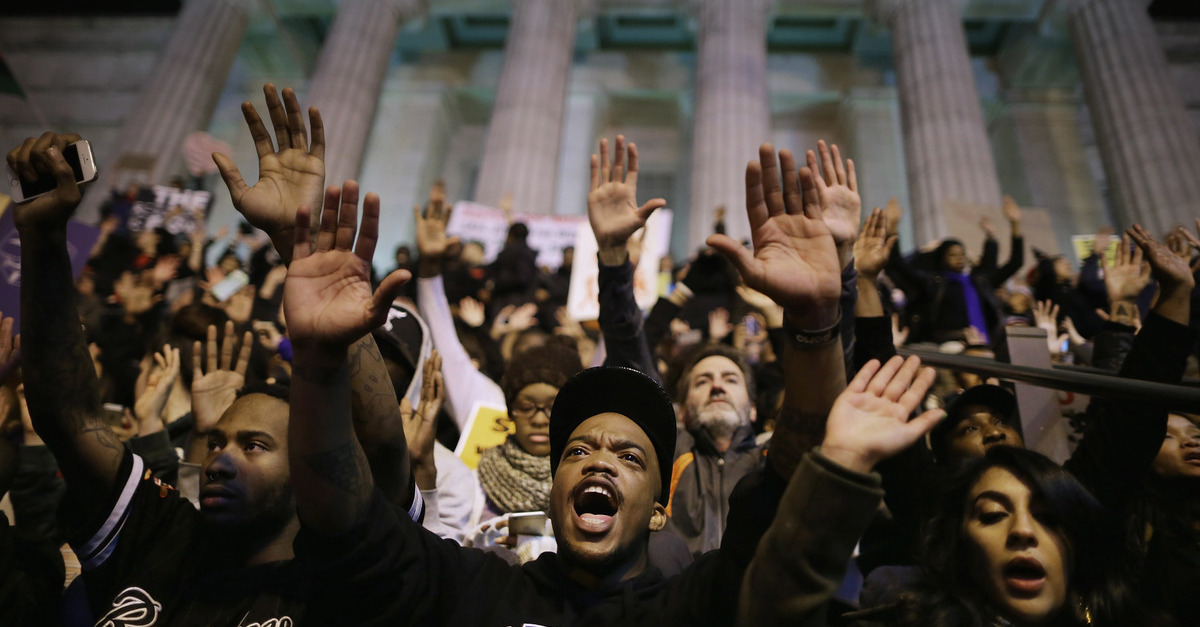 More than one thousand demonstrators chant “Hands up, don’t shoot!” on the steps of the National Portrait Gallery in protest a day after the Ferguson grand jury decision to not indict officer Darren Wilson in the Michael Brown case November 25, 2014 in Washington, D.C.

A grand juror who heard the evidence in the case of Darren Wilson, the former Ferguson, Missouri police officer who shot and killed Michael Brown, wanted to speak out about her experience on the case. The Eighth Circuit refused to allow it.

In 2014, a grand jury heard evidence presented by St. Louis County Prosecuting Attorney Robert P. McCulloch; after that grand jury didn’t return an indictment against Wilson, McCulloch held a press conference in which he discussed some of the evidence and testimony that had been presented to the grand jury. Names of grand jurors, witnesses, and key people involve in the investigation were not released, but the holding of a press conference was unusual. Typically, all aspects of grand jury proceedings are kept entirely secret.

The juror, who is identified in court documents as “Grand Juror Doe,” swore the oath of secrecy required of all Missouri grand jurors. However, after hearing McCulloch’s pubic statements, Doe sued. Her lawsuit alleged that the Missouri statutes requiring her to stay silent about her grand jury service were an unconstitiutional violation of her right to free speech.

Doe argued that McCulloch had mischaracterized the views of the grand jurors – and that she wished to set the public straight as to what actually occurred. In her pleadings, Doe explained that he wanted to speak out discrepancies she noticed between procedures used in the McCulloch case compared with other cases, and that she sought to contribute to the national dialogue on race relations. As someone who had first-hand knowledge of how the Wilson case had been handled, Doe could offer unique insight to a topic of national concern.

Doe lost at the District Court level; the federal court ruled both that Doe lacked standing to bring a case, and that she failed to state a claim upon which relief can be granted. Doe appealed to the Eighth Circuit solely on Constitutional grounds, arguing that the Missouri statute requiring secrecy run afoul of the First Amendment.

The Eighth Circuit examined Mo. Rev. Stat. § 540.320 and accepted the lower court’s determination that it constituted a content-based restriction on free speech; the highest level of judicial scrutiny, therefore, was to be applied. When the Eighth Circuit analyzed the secrecy statute using strict scrutiny,  though, it found that the statute was narrowly-tailored to achieve the government’s compelling interest in keeping grand jury proceedings secret.

The three-judge panel included U.S. Circuit Judges Roger Wollman (a Ronald Reagan appointee), Bobby Shepherd and Raymond W. Gruender (both George W. Bush appointees). Writing for the panel, Judge Gruender detailed the centuries-old history of secrecy in grand jury proceedings upon which the American system is based. The system, explained Gruender, positions grand juries to be used as “both a sword and shield of American criminal law.” Secrecy is critical to the functioning of the system, wrote Gruender, so that grand jurors avoid harassment, intimidation, and the “fear of unjustified public criticism.”

The panel ruled that neither the high-profile aspect of the Wilson case nor “McCullough’s extraordinary step” of releasing some information changes the context to warrant invalidating the statute:

To be sure, in a case where the name of the accused and the facts are widely known, this concern is of less importance. But the fact that much of the evidence is public does not lessen Missouri’s compelling interest in ensuring individual members of the grand jury do not use the information they gathered as part of the grand jury process to impugn the innocence of the accused with charges they could not agree to collectively.