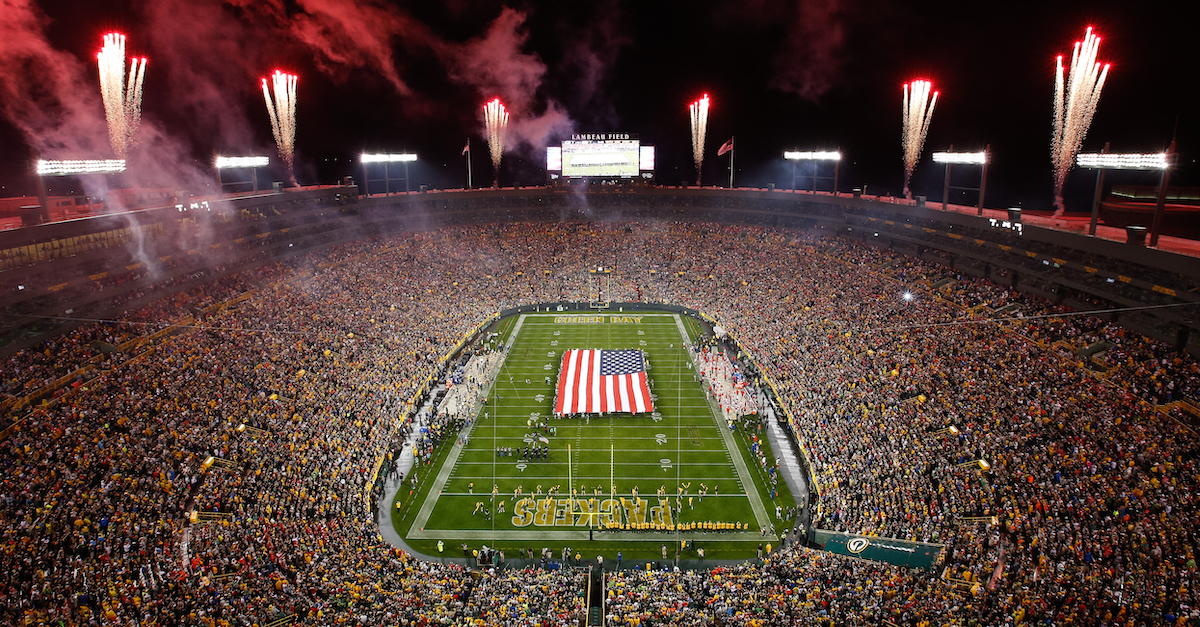 The national anthem is sung prior to the NFL game between the Green Bay Packers and the Kansas City Chiefs at Lambeau Field on September 28, 2015 in Green Bay, Wisconsin.

A group of Wisconsin lawmakers on Thursday proposed a bill which would require the national anthem to precede any sporting event in the state which receives government money.

Sen. Patrick Testin, Rep. Tony Kurtz (who also owns a hemp farm), and Rep. Scott Krug announced the measure on Twitter and on Facebook. All three are Republicans.

Today, @RepTonyKurtz, @RepKrug, and I proposed the Star Spangled Banner Act, which would require the playing of the national anthem at sporting events held in venues that have received public funding. pic.twitter.com/ZGDyt7OyMT 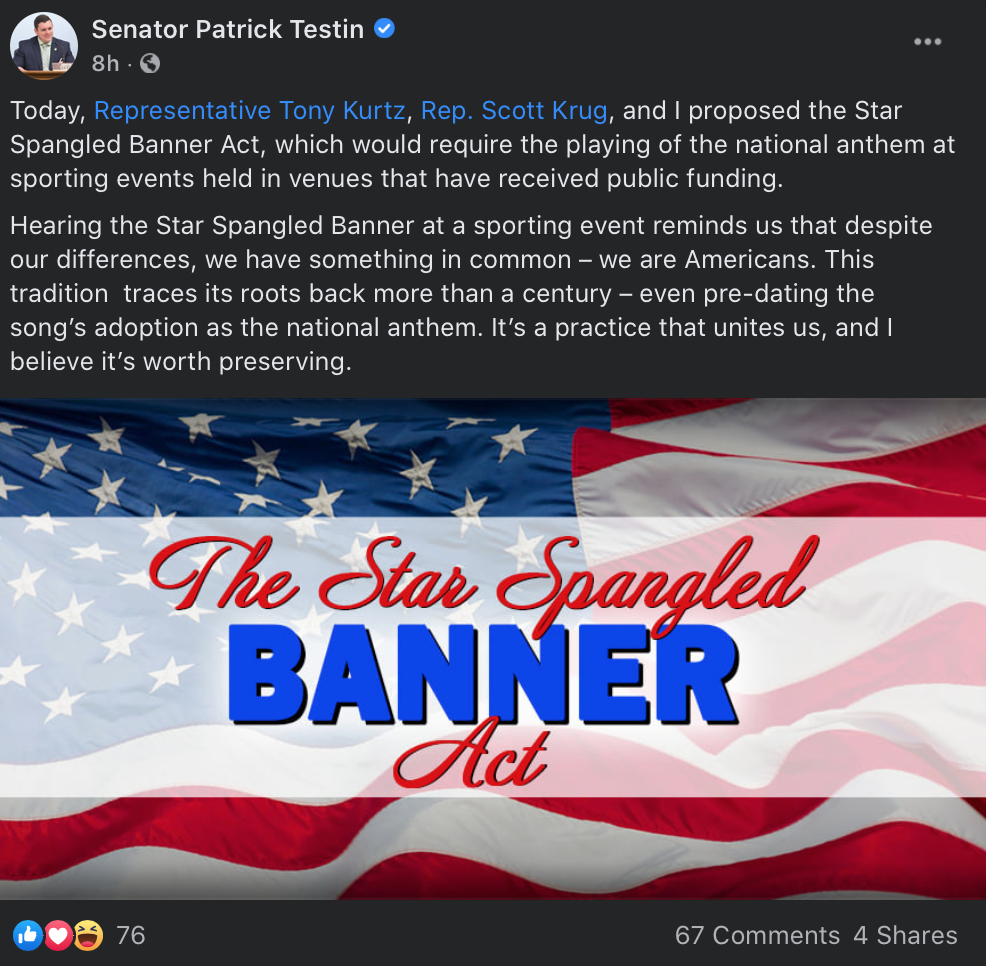 In a statement, Testin said his bill was a response to “a small, but vocal group of activists” who have caused “the practice of playing the national anthem at sporting events [to] come under fire.”

“Hearing the Star Spangled Banner at a sporting event reminds us that despite our differences, we have something in common – we are Americans,” Testin said. “This tradition traces its roots back more than a century – even pre-dating the song’s adoption as the national anthem. It’s a practice that unites us, and I believe it’s worth preserving.”

According to the Associated Press, Testin’s bill “simply says” as follows: “No sporting event may be held in a venue the construction of which was financed at least in part from moneys contributed by a state agency or local governmental unit unless the event is preceded by the playing or singing of the national anthem.”

Testin points out that his bill’s language facially requires the national anthem to be played at all Green Bay Packers NFL games.

Other venues, such as American Family Field (home to the Milwaukee Brewers baseball team) and the Fiserv Forum (home to the NBA’s Milwaukee Bucks), “would also be impacted,” Testin added.

Brown County, Wis. taxpayers funded the reconstruction of Lambeau Field through an additional Football Stadium District tax of 0.5% between the years 2000 and 2015.

But, as the AP reported, the bill does not strictly define what is and is not a “sporting event.” That lack of clarity “rais[es] the question of whether the anthem would have to be sung every time someone gets together for a pickup game of football at the city park or plays a softball game on a municipal field,” the AP wondered.  The wire service also noted that the bill in its current form also does not carry a penalty.

2. Most of the fields, courts, pools, diamonds, etc. I played on did not have PA systems. Would someone have to bring a boom box? Would everyone have to sing, or just one person be assigned to sing?

Wisconsin law requires schools to “offer” the national anthem or the Pledge of Allegiance “each school day.” However, the law contains religious exemptions for private schools.  It also says students cannot be compelled against their own objections or the objections of their parents “to recite the pledge or to sing the anthem.”

It is unclear whether Testin’s bill carries similar exemptions. A full text version of the proposal has not, as of the time of this writing, been added to the state website which tracks legislation.

Yes, THIS is what our state needs right now! State mandated patriotism. Out of touch much?

your authoritarianism is showing 😉

Wow, what an important bill to help Main St. businesses and the people of WI. Mandatory patriotism. Thank goodness for gerrymandering so you and @RepKrug don’t have to propose bills that actually improve WI. #FairMaps

Yes, gerrymandering really does result in the worst public servants.

Authoritarian much? How about putting some of that authoritarian mandate energy toward mask requirements? Or even requiring sports teams to set aside a percentage of tickets to their games a a price a family can afford. Oh you don’t care about them. Go pound sand dude.

Private citizens would get fired for repeatedly wasting their time on nonsense like this.

this is what you’re worried about? Also seems pretty authoritarian and not American to force patriotism on people.

Since you are so concerned with enforcing state-mandated patriotism, will you also be forcing people to salute the flag? Will we have to salute people who wear flag speedos and halter tops? Perhaps, trump-like, we should all hump and kiss the flag while we are at it?

Ridiculous! People are losing jobs, homes, LIVES. And what you care about is mandating a patriotism . Wis needs vaccines, universal healthcare, decent jobs not bombastic displays.

stop wasting our money, please & do something constructive. there’s a pandemic happening.

Remember when the GOP was the small government party?

Neither Testin nor his spokesperson responded to questions from the AP. Emails from Law&Crime seeking a copy of the bill and comment about its constitutionality have similarly and thus far gone unreturned.