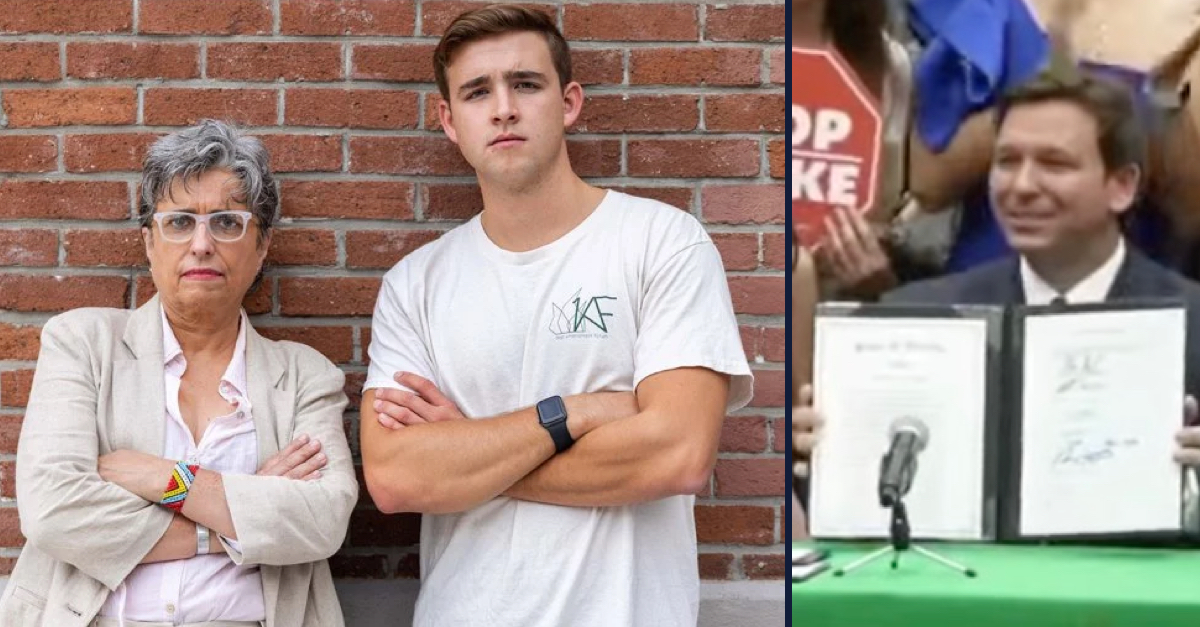 Florida will not be allowed to enforce it’s so-called “Stop W.O.K.E. Act” — a controversial law that prohibits public school instructors from expressing their viewpoints in class about racism, sexism, and discrimination generally — against public university professors in the state, at least for now.

In a ruling issued Thursday, U.S. District Judge Mark Eaton Walker issued a preliminary injunction prohibiting enforcement of the law, short for “Stop Wrongs to Our Kids and Employees Act,” as to public university professors. The ruling applied to two different lawsuits that challenged the law: Pernell v. Florida Board of Governors of the State University System and Adriana Novoa v. Manny Diaz, Jr., the commissioner of the state’s Board of Education.

As Law&Crime previously reported, LeRoy Pernell, a Black professor at Florida A&M University, along with six other Black professors and one Black student, sued the Board of Governors in August. They alleged that the law is an attempt to stifle discussion about racism in the aftermath of the summer of 2020, when George Floyd’s murder in police custody sparked nationwide protests over police brutality and racial inequity.

Law&Crime has also reported on the case filed in September by Adriana Novoa, a professor at the University of South Florida, and Sam Rechek, a student. Novoa argued that the law will have a chilling effect on the way she teaches some of her undergraduate courses that examine science and culture in various contexts. Rechek said that he had planned to take Novoa’s Science in Cultural Context class in the spring of 2023, and that the “Stop WOKE Act” infringes on his First Amendment right to receive information.

According to the text of the law, “[i]t shall constitute discrimination on the basis of race, color, national origin, or sex under this section to subject any student or employee to training or instruction that espouses, promotes, advances, inculcates, or compels such student or employee to believe” what Walker refers to as the “eight concepts,” which are as follows:

At the time of signing, Florida Gov. Ron DeSantis (R) praised the law for providing “tools to stand up against discrimination and woke indoctrination” and including provisions to prevent “discriminatory instruction in the workplace and public schools[.]” Diaz, the complaint says, was a “principal sponsor” of the act.

In his ruling, Walker granted the injunction requests as to all but one of the professors in both cases, finding that Dr. Marvin Dunn hadn’t sufficiently shown that, as an emeritus professor who shares his perspective as part of a Black history bus tour for Florida International University (FIU) students and staff, he participates in “instruction” as defined by Florida law.

Walker also granted the injunction as to Rechek but not as to Johanna Dauphin, the student in the Pernell case. The judge found that Rechek had sufficiently shown that his First Amendment “right to receive” information — a corollary to First Amendment free speech and free press rights — was violated because he planned to take Novoa’s class, and Novoa was indeed planning on censoring herself in order to comply with the law; Dauphin, however, had made no such showing, according to Walker. The injunction requests were also denied as to some members of the Board of Trustees in the Pernell case, as Walker found that those plaintiffs’ injuries were not “fairly traceable” to those particular defendants.

However, the end result of Walker’s ruling is that Diaz and the Board of Education are not allowed to enforce the provisions of the law that prohibit public university professors from expressing their views on topics covered by the “eight concepts” described above.

“This Is Positively Dystopian.”

The judge’s expansive, 139-page ruling is fiery from the start, practically seething with disdain for the defendants’ arguments and the underlying law.

“‘It was a bright cold day in April, and the clocks were striking thirteen,’ and the powers in charge of Florida’s public university system have declared the State has unfettered authority to muzzle its professors in the name of ‘freedom'” Walker begins, quoting 1984, the George Orwell novel that is often cited by right-wing critics of liberal positions or policies. “To confront certain viewpoints that offend the powers that be, the State of Florida passed the so-called “Stop W.O.K.E.” Act in 2022 — redubbed (in line with the State’s doublespeak) the ‘Individual Freedom Act.'”

Walker, a Barack Obama appointee, says that the law “bans professors from expressing disfavored viewpoints in university classrooms” while allowing “unfettered expression” of the opposite viewpoints.

“Defendants argue that, under this Act, professors enjoy ‘academic freedom’ so long as they express only those viewpoints of which the State approves,” Walker writes. “This is positively dystopian. It should go without saying that ‘[i]f liberty means anything at all it means the right to tell people what they do not want to hear.'”

After recapping the plaintiffs’ argument — that the law is unconstitutional under the First and Fourteenth Amendments — Walker witheringly frames the Board of Education’s position as little more than an effort at suppress various viewpoints:

Although Walker describes the defendants’ arguments as “disorienting,” he says that “both sides go too far in conflating legal concepts, quoting language devoid of context from their source material, and ignoring controlling authority.” His ire, however, was mostly directed at the defendants: he dispatched the Education Department’s argument that anything a professor says in a university classroom amounts to the speech of the state itself, noting that “that is not the law” and that the defendants have not cited any precedent that would support their position.

“Defendants, however, ask this Court to read these cases to conflate the State’s right to make content-based choices in setting the public school curriculum with unfettered discretion in limiting a professor’s ability to express certain viewpoints about the content of the curriculum once it has been set,” Walker writes (emphasis in original). “But that is not what these cases hold, nor does their reasoning extend so far.”

Walker ultimately concluded that the First Amendment protects university professors’ in-class speech, and that the Florida statute doesn’t pass the heightened scrutiny that courts must apply to viewpoint-restrictive laws.

“The State Allows for ‘Indoctrination’ In its Preferred Orthodoxy.”

Walker put footnotes to good use in his ruling, repeatedly peppering them with verbal jabs at the Education Department.

He took issue with the defendants’ insistence that a “savings clause” in the law insulates the defendants from the lawsuit. That clause says that the statute “may not be construed to prohibit discussion” of the eight concepts, “provided that such training or instruction is given in an objective manner without endorsement of the concepts.”

The judge found that this clause was vague, and somewhat sarcastically noted that reinforces the unconstitutional nature of the law.

“[I]t serves to permit ‘discussion’ of the specified concepts, so long as that discussion does not stray from the State’s viewpoint or those viewpoints the State allows,” Walker wrote.

In another footnote, Walker pondered his own comparison of the Florida law to Orwell’s dystopian novel, which envisions a grim surveillance state that values conformity and suppresses opposition.

Per the judge (citations removed):

It is not lost on this Court that Mr. Orwell, in the original preface to his iconic political satire of the rise of Joseph Stalin, Animal Farm, was responding to the liberal elites of his time. According to Mr. Orwell, the censoring of Animal Farm was merely a symptom of the fashionable orthodoxy of that era—namely, an “uncritical admiration of Soviet Russia.” So too, here, the State has responded to fears of “woke indoctrination” in university classrooms. But rather than combat “woke” ideas with countervailing views in the “marketplace of ideas,” the State has chosen to eliminate one side of the debate. This only highlights the problem with viewpoint discrimination — in the name of combatting “indoctrination” of one perceived orthodoxy, the State allows for “indoctrination” in its preferred orthodoxy.

In yet another footnote, using language often deployed by conservatives taking aim at judges they perceive as liberal, Walker said that he would decline to push the defendants’ particular political agenda.

“Defendants essentially ask this Court to engage in ‘judicial activism,’ since accepting Defendants’ argument would require this Court to substitute binding precedent with Defendants’ policy preference,” Walker writes, citing essays from stalwart conservative organizations such as the Federalist Society and the Washington Examiner as examples of why “judicial activism” is bad. “But unlike Defendants, this Court prefers judicial modesty to activism.”

Representatives from the American Civil Liberties Union, which represents the Pernell plaintiffs, celebrated the ruling.

“This is a huge victory for everyone who values academic freedom and recognizes the value of inclusive education,” said Emerson Sykes, senior staff attorney with the ACLU Speech, Privacy, and Technology Project, in a press release. “The First Amendment broadly protects our right to share information and ideas, and this includes educators’ and students’ right to learn, discuss, and debate systemic racism and sexism.”

Lawyers for Novoa and Rechek similarly praised the ruling as the right call.

“College campuses are spaces for debate, not dogma,” said FIRE attorney Greg H. Greubel, an attorney with the Foundation for Individual Rights and Expression (FIRE). “Americans recognize that the government cannot be an all-powerful force permitted to control every word uttered by a professor in the classroom. Today’s ruling is an important first step in ensuring that professors’ First Amendment rights are respected by the state of Florida.”

The Florida Department of Education did not immediately respond to Law&Crime’s request for comment.

[Photo of Novoa and Rechek via FIRE. Image of DeSantis via screengrab.]