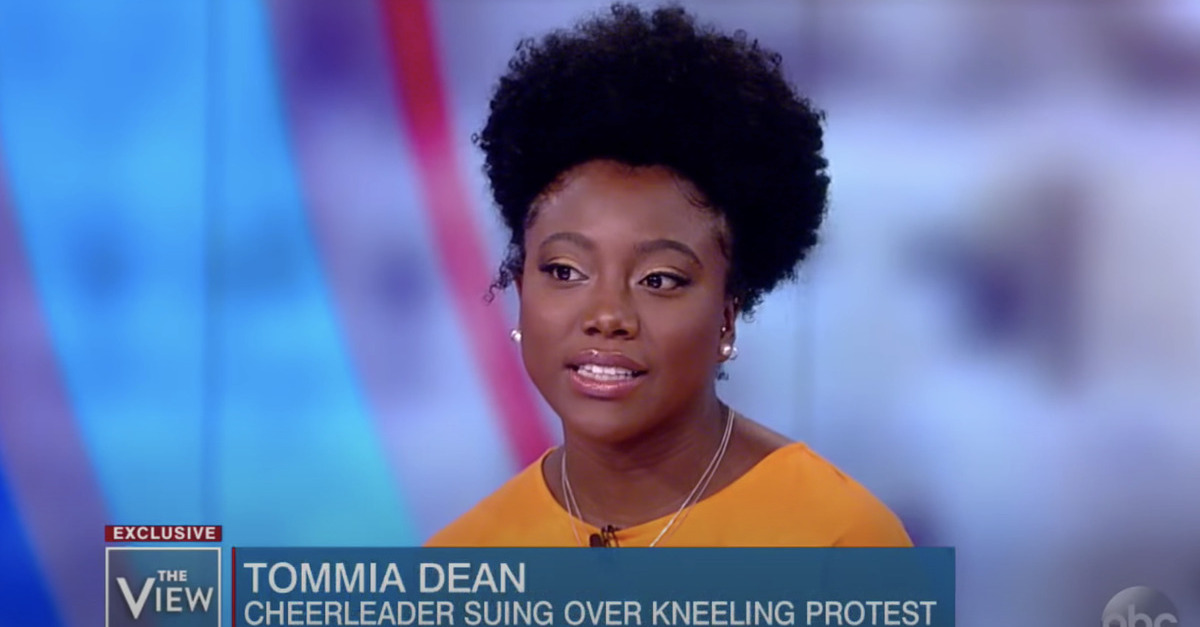 Tommia Dean pictured discussing her lawsuit on The View.

A Black cheerleader who was prevented from taking a knee during the national anthem has lost her case in a federal appeals court.

The U.S. Court of Appeals for the 11th Circuit unanimously affirmed the dismissal of Tommia Dean’s lawsuit. Dean was a cheerleader at Kennesaw State University (KSU) in Georgia who kneeled during the national anthem at one of the university’s football games.

Inspired by Colin Kaepernick’s protests in 2017, Dean and several of her fellow cheerleaders (all of whom are also Black) kneeled during the national anthem. The students’ protest sparked varied reactions from the school and the state.

First, the president of KSU sent a “concern[ed]” email about the protest and directed the school’s Vice President to meet with the cheerleaders. Next, the office of Georgia’s Attorney General contacted the school and provided officials some legal advice: the students’ right to kneel in protest is protected by the First Amendment. It should be permitted so long as it is not disruptive, and no further action should be taken against the protesters without specific guidance from above.

However, on the very same day, Earl Ehrhart, the Georgia state legislator who oversaw the budget for the state’s public universities, called the college’s athletic director and instructed him to prohibit the cheerleaders from kneeling during the national anthem. Both the athletic director and county sheriff Neil Warren assured Ehrart that there would be no more protest-kneeling by the cheerleaders.

Dean sued two athletic directors and the university president for violation of her First Amendment rights, and those claims were settled. Dean also brought claims against Ehrhart and Warren, alleging that the two conspired to deprive her of her constitutional rights. According to Dean’s complaint, Ehrhart is the self-described “‘funding source’ for the University System and has had a history of wielding his power of the purse to pressure administrators of Georgia’s state universities to comply with his personal agenda.”

Both of Dean’s claims were dismissed by the district court after it found that Dean had not stated a plausible claim that Ehrhart and Warren had acted “with a racial or otherwise class-based discriminatory motive.”

Dean also offered the court an alternative argument: she and her fellow protesters use were members of the “political class” of those protesting police brutality against African Americans. The court rejected that argument, though it clarified the narrowness of its holding. “We need not decide whether political classes can ever serve as a basis for a § 1985(3) claim,” wrote Pryor, “because the particular political class Dean alleged does not satisfy [requirements of relevant precedent].”

Chief Judge William Pryor, joined by Circuit Judge Carnes, wrote a separate concurrence. Even if Dean had sufficiently stated her legal claims, he argued, her claim should still be dismissed. Chief Judge Pryor reasoned that cheerleading is, by its nature, government speech.

“[A]s a matter of history,” he wrote, “cheerleaders have traditionally been understood to communicate an important message on behalf of their schools: cheer for our team to win the game.”

The judge added that KSU endorses its cheerleaders’ message and has every right to dictate the terms of that message.

“It would be highly unusual for a public university to allow its cheerleaders—while they are in uniform on the field at a football game—to say or do whatever they please,” explained Pryor. “For example, Auburn University does not allow its cheerleaders to root for its rival—and reigning national champion in football—the Crimson Tide of the University of Alabama, as much as they might want to do so.”

The chief judge continued, arguing that “[a]bsurd results would follow” if cheerleaders were allowed to make unapproved on-field messages.  If Dean’s argument were to prevail, she “would have a right to perform her own unapproved, self-choreographed cheer, to cheer for the opposing team, or to refrain from cheering at all.” He continued, “She would also have a right to stage a hunger strike, to hold up campaign posters for a political candidate, to entertain the crowd with expressive dance, to cut up the American flag, or to wear a leather jacket over her cheerleader uniform with the words ‘f*** the draft’ stitched onto the back.” The judge reasoned that while “[n]o one doubts that Dean has these rights as a citizen,” she relinquishes those rights, “when she puts on a school uniform and joins her teammates on the sidelines of a game.”

[screengrab via The View]