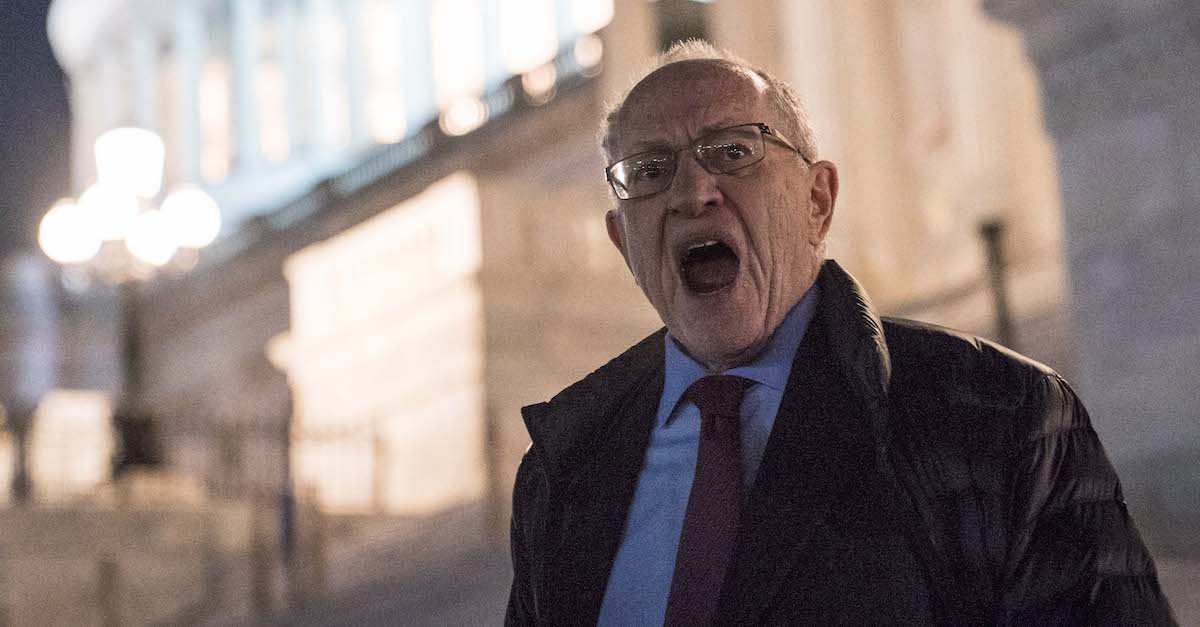 Harvard Law professor emeritus Alan Dershowitz on Tuesday secured a significant procedural victory in federal court against CNN as part of his ongoing defamation lawsuit against the network.

CNN’s attorneys filed a motion to dismiss the $300 million lawsuit for failure to state a claim last November. The U.S. District Court for the Southern District of Florida was not convinced, and the parties will now move on to the discovery phase of proceedings.

“Looking forward to deposing the commentators and heads of CNN and of the truth coming out,” Dershowitz told Law&Crime in an email.

The famed celebrity attorney sued the liberal media outlet last September after CNN aired an edited clip of his defense argument in favor of then-president Donald Trump during the latter’s 2020 Senate impeachment trial over the Ukraine phone call affair.

“The only thing that would make a quid pro quo unlawful is if the ‘quo’ were in some way illegal,” Dershowitz said in response to a question from Sen. Ted Cruz (R-Tex.).

CNN, however, only aired the final segment of Dershowitz’s defense which discussed the “public interest” motive. The broadcast did not provide the portion about what Dershowitz believed would make a quid pro quo illegal.

Dershowitz, through his attorneys, argued that CNN’s editing of his defense and the ensuing conversation on the network resulted in an intentionally “misleading” narrative that caused the cable news network’s viewers to question his stature as an elite thinker.

The original petition details that coverage [emphasis in original]:

Following the airing of that clip over and over again, the hosts, together with their panel guests, including CNN employees and paid commentators, exploded into a one-sided and false narrative that Professor Dershowitz believes and argued that as long as the President believes his reelection is in the public interest, that he could do anything at all – including illegal acts – and be immune from impeachment. The very notion of that was preposterous and foolish on its face, and that was the point: to falsely paint Professor Dershowitz as a constitutional scholar and intellectual who had lost his mind.

“Professor Dershowitz expressly stated that a president could be impeached and removed from office if what he did was ‘somehow illegal,’ regardless of his motive to be reelected,” the lawsuit argued in another section.

In a 22-page ruling, U.S. District Judge Raag Singhal agreed with Dershowitz about the misleading nature of CNN’s chosen clip.

“CNN presented an abridgment of Dershowitz’ answer to Senator Cruz’ question,” Singhal wrote. “The abridgment is not accurate, to the extent that it omitted a crucial qualification: that an illegal motive for a quid pro quo would be corrupt. As a result, the commentators’ statements – that Dershowitz believes a President can do anything, even commit crimes if it would help his re-election – are not based upon a fair and accurate summary of Dershowitz’ statement to the Senate.”

The network moved to dismiss Dershowitz’s claim based on the fair reporting privilege. While the court acknowledged CNN’s arguments that “editors and publishers have great discretion to determine what information to publish” and that “the media has no obligation to present additional information that would present a subject in a better light,” Judge Singhal said the network didn’t actually report Dershowitz’s statements fairly and accurately.

“Dershowitz alleges that if the entire clip had been played, no panel guest would have been able to credibly make that statement,” the court noted. “Thus, Dershowitz argues, CNN presented an official proceeding in a misleading manner and the fair report privilege does not apply. The Court agrees.”

The opinion goes on to explain at length:

CNN argues that Dershowitz’ response to Senator Cruz’ statement was ambiguous and that CNN was reasonable in its belief that Dershowitz argued “that presidents cannot be impeached for actions taken to win an election if the President believes his own victory would be in the public interest, regardless of the legality of those actions.” That is an argument that CNN may present to a jury. But because the broadcasts did not present a fair and accurate abridgment of Dershowitz’ remarks, CNN cannot avail itself of the fair report privilege.

[T]he CNN broadcast segments set forth in Dershowitz’ Complaint were focused specifically on Dershowitz’ comments to the Senate and, as presented on air, changed the gist of what Dershowitz said. For the fair report privilege to apply a defendant must have “presented a fair and accurate report of the source documents.” The CNN broadcasts do not meet that standard.

Notably, Dershowitz also convinced the court to maintain his claim that CNN acted with actual malice, a legal term of art necessary for defamation claims filed by individuals already in the public eye at the time of the allegedly defamatory statements.

“Dershowitz has adequately pleaded actual malice to survive the Motion to Dismiss,” the court noted. “Whether the evidence adduced will ultimately satisfy Dershowitz’ burden of proving actual malice by clear and convincing evidence remains to be seen. But he has alleged enough to go forward.”

Law&Crime reached out to CNN’s lead attorneys defending the network in the defamation case, but no response was forthcoming at the time of publication.