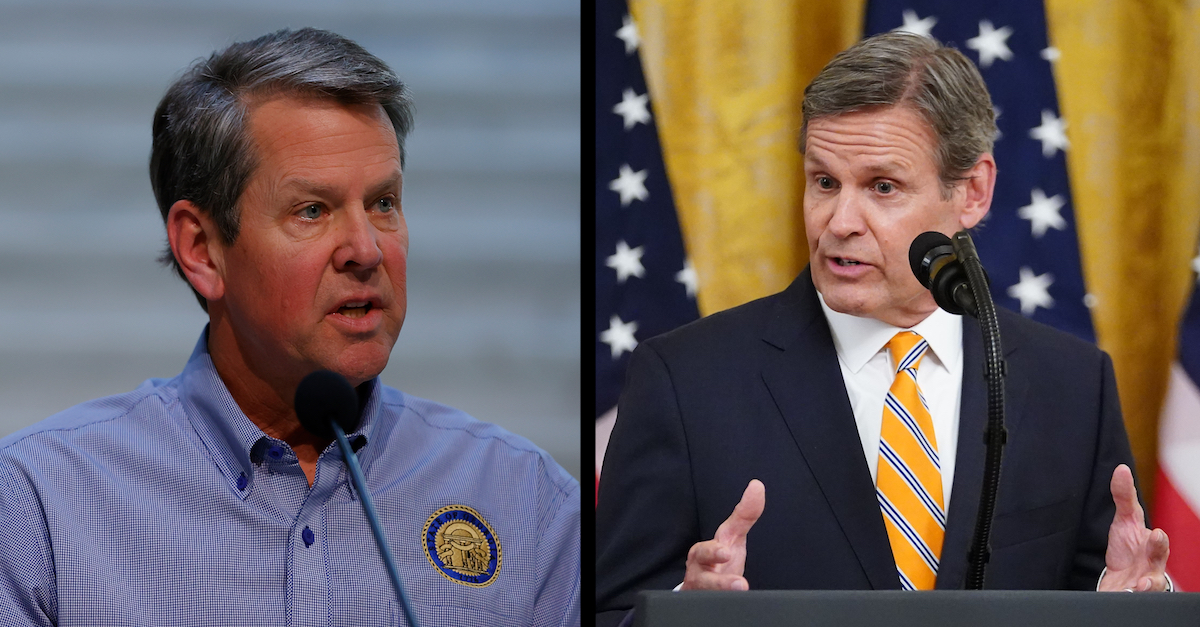 A temporary restraining order against Tennessee officials was issued by Judge William L. Campbell, Jr., a Donald Trump appointee, less than an hour after Gov. Bill Lee (R-Tenn.) signed the measure into law. The TRO in Tennessee expires in two weeks pending a hearing for preliminary injunction.  A permanent injunction against a similar abortion ban in the State of Georgia was issued Monday by federal judge Steve C. Jones, a Barack Obama appointee. It prevents Georgia officials from ever enforcing their strict abortion law which was signed into law last year.

The Georgia case, styled as SisterSong Women of Color Reproductive Justice Collective v. Kemp, centered around Georgia House Bill 481, officially known as the “Living Infants Fairness and Equality (LIFE) Act.” The bill, which Republican Gov. Brian Kemp applauded, cited the Declaration of Independence and the Fourteenth Amendment as the underpinnings of a state policy “to recognize unborn children as natural persons.” It provided legal protection to any “unborn child with a detectable human heartbeat” and banned abortions at that point in the gestation process, which generally occurs around six weeks. (The state said fetal heartbeats might become detectable a few days earlier; the plaintiffs said they might become detectable shortly after six weeks.)

Judge Jones agreed in a 67-page ruling that the Georgia ban “constitute[d] a pre-viability abortion ban and is therefore unconstitutional.”  Viability, legally, is the point of development at which a fetus can live on its own outside a mother’s womb. Generally, it occurs at about 23 or 24 weeks with modern medical equipment, the decision says.

In other words, current U.S. Supreme Court precedent allows abortions to legally occur roughly 18 weeks further into a pregnancy than the Georgia law allowed. That, Judge Jones, wrote, is why Georgia’s law had to be tossed.

“The Supreme Court has repeatedly and unequivocally held that under no circumstances whatsoever may a state prohibit or ban abortions at any point prior to viability,” Jones wrote by citing Roe v. Wade and Planned Parenthood v. Casey. “Consequently, a prohibition or ban on abortion at any point prior to viability is inherently unconstitutional—no matter what interests a state asserts to support it.”

Jones also focused on whether abortion restrictions placed an “undue burden” on a woman’s right to choose.

“Only where state regulation imposes an undue burden on a woman’s ability to choose to terminate or continue her pregnancy before viability does the power of the State reach into the heart of the liberty protected by the Due Process Clause,” Jones said, quoting Casey in part.  “An undue burden exists, and therefore a provision of law is invalid, if its purpose or effect is to place a substantial obstacle in the path of a woman seeking an abortion before the fetus attains viability.”

Jones said Roe and Casey were binding authority his court was forced to accept. The only option now for Georgia authorities is an appeal.

Jones further rubbished attempts by Georgia officials to hide behind DeKalb County District Attorney Sherry Boston’s promise not to prosecute anyone under the new Georgia abortion law—which she (like many) believed was unconstitutional from the start.

“Defendant Boston is free to change her mind at any time,” Judge Jones wrote.  “Because Defendant Boston’s mid-litigation assurances are binding on neither her nor her eventual successors,” the plaintiffs still had standing to sue because they feared they could be prosecuted.

The Tennessee litigation, which is in much earlier stages, cited the same case law to arrive at a similar end result, though the judge’s order is a mere seven pages long. It also quotes many of the same exact passages of Casey.

Judge Campbell, sitting in federal court in that state, noted that the Tennessee legislation criminalized as a Class C Felony any abortions performed after a fetal heartbeat was detected.  He further noted Tennessee attempts to make abortion legal where providers know a woman is seeking to terminate her pregnancy because of the sex or race of her fetus or if the fetus was screened as positive for Down syndrome.

Campbell noted that fetal heartbeat laws had been previously restrained or enjoined by federal courts in the states of Mississippi, Arkansas, North Dakota, and (of course) Georgia; an Indiana law banning abortion because of a fetus’s sex, race, ancestry, or Down syndrome status was also struck down; an Arkansas ban on abortions because of a fetus’s Down syndrome status was similarly enjoined.

A a 36-page legal response filed by Tennessee officials and “over 200 pages of declarations and exhibits” were unpersuasive given the 6-week fetal heartbeat standard set forth in state law and the viability standard of 23 or 24 weeks in constitutional law.

The Tennessee litigation will continue with a scheduled July 24 hearing for a preliminary injunction.

READ the court documents below: