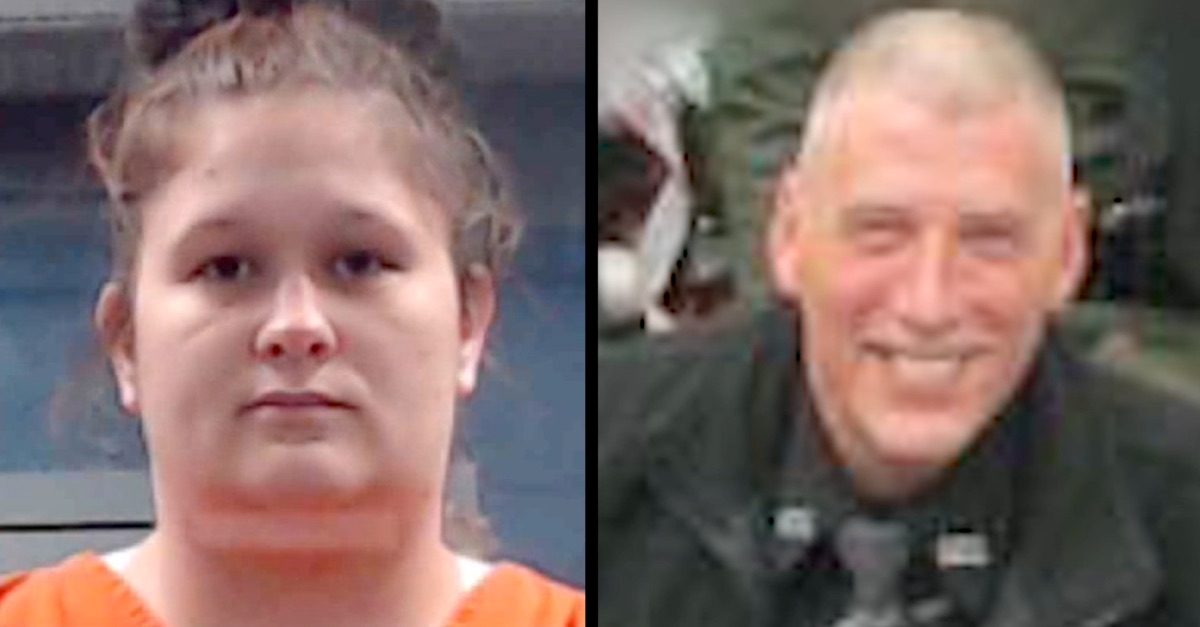 A Fayette County, West Virginia woman last week pleaded guilty to sex trafficking a 17-year-old relative to a co-defendant who worked as a deputy sheriff and as a chief of police.

According to the U.S. Department of Justice, Kristen Naylor-Legg, 28, admitted to conspiracy to engage in sex trafficking of a minor. The minor was trafficked to Larry Allen Clay, Jr., who at the time was “an employee of the Fayette County Sheriff’s Department and the Chief of Police for the Gauley Bridge Police Department.”

“Naylor-Legg admitted that on the first occasion she was paid $100 by Clay,” the DOJ said in a press release. “On the second occasion, Naylor-Legg indicated that Clay had agreed to pay her $50 in exchange for sexual intercourse with the minor but ultimately did not give her the money.”

An affidavit in Clay’s case lays out the factual allegations somewhat differently.

On September 30, 2020, your affiant interviewed the female victim about the allegations. The female victim stated that on two different occasions in June 2020, and while she was 17 years old, Naylor-Legg, a relative of hers, accompanied her to meet CLAY so that he could have sexual intercourse with her. The female victim reported that one incident took place in/near Cain Branch, Fayette County, WV (located just outside Gauley Bridge city limits). She stated that the second incident took place in/near Fauley Bridge, Fayette County, WV (inside the Gauley Bridge Police Department within the old Gauley Bridge High School). According to the victim, CLAY rendered $50 per incident to Naylor-Legg. Due to the female victim becoming emotional, your affiant ended the interview and explained to her that a HSI Forensic Interviewer could further discuss what took place between her and CLAY at a later date.

During a subsequent Oct. 6, 2020 interview, “the female victim again disclosed that CLAY had sexual intercourse with her on two different occasion in June 2020 while she was 17 years old.”

“The female victim said CLAY was aware of her age, in part because the female victim knew that Naylor-Legg and CLAY had discussed her upcoming 18th birthday,” the affidavit continued.

It goes on to allege that Clay met the victim in a police car and wearing his police uniform:

The next alleged incident happened in the local police department which is apparently inside an old school:

After learning that the towels were thrown over in the corner of the specified room, your affiant contacted Gauley Bridge Town Hall and requested that the town secure the area in the high school where the female victim stated the incident took place. There was limited access to the room in question; CLAY was one of the limited group of individuals with access. Your affiant and a TFO traveled to Gauley Bridge and met with Gauley Bridge Mayor Robert Scott. Your affiant obtained written consent from Mayor Scott to enter the old Gauley Bridge High School (which is now a community center owned by the city of Gauley Bridge) and search for evidence of the crime. Your affiant and the TFO traveled to the school with the Mayor and the Acting Police Chief for Gauley Bridge and were granted access to the building. During the search, the government seized five cotton products (towels and paper towels) from the room described by the female victim that appeared to be stained with an unknown substance.

DNA tests on the towels revealed two contributors, and lab tests “could not exclude the victim and CLAY as contributing to the DNA mixture,” the affidavit points out.

Clay was charged with sex trafficking a minor.

Naylor-Legg could be sentenced to life in prison and will be required to register as a sex offender, the DOJ said.

Ms. Legg will be forthright and truthful with this office and other law enforcement agencies with regard to all inquiries made pursuant to this agreement, and will give signed, sworn statements and grand jury and trial testimony upon request of the United States. In complying with this provision, Ms. Legg may have counsel present except when appearing before a grand jury. Further, Ms. Legg agrees to be named as an unindicted co-conspirator and unindicted aider and abettor, as appropriate, in subsequent indictments or informations.

A civil lawsuit filed by the victim against the City of Gauley Bridge and against Clay lays out more alleged lurid details. The suit says Naylor-Legg and Clay were engaged in an “extra-marital affair” when Clay indicated “he was sexually interested in Plaintiff.” Naylor-Legg threatened to have the victim thrown out of her housing situation and left “to live on the street” if she didn’t start showing interest in Clay. The suit further says Naylor-Legg took photos of the victim in exchange for money and that Clay “continually tr[ied] to get physically close to” the victim at a high school graduation party.

“During the party, Plaintiff did her best to avoid Chief Clay,” documents allege. Later, “Mrs. Naylor-Legg told Plaintiff [the victim] that she needed to have sexual intercourse with Chief Clay in exchange for money, because the family needed the funds to keep the utilities on in their home.”

The civil suit says another individual (besides Clay, Naylor-Legg, and the victim) was present during the first sex act and can serve as a witness.

Elsewhere, the civil suit said that Naylor-Legg and Clay “arranged for another law enforcement officer to have sexual intercourse with Plaintiff in exchange for money.”

“Prior to the encounter, Chief Clay showed the other law enforcement officer naked pictures of Plaintiff,” the lawsuit alleges. It says the other officer — who has “yet to be identified” — backed out when he learned the victim was only 17.