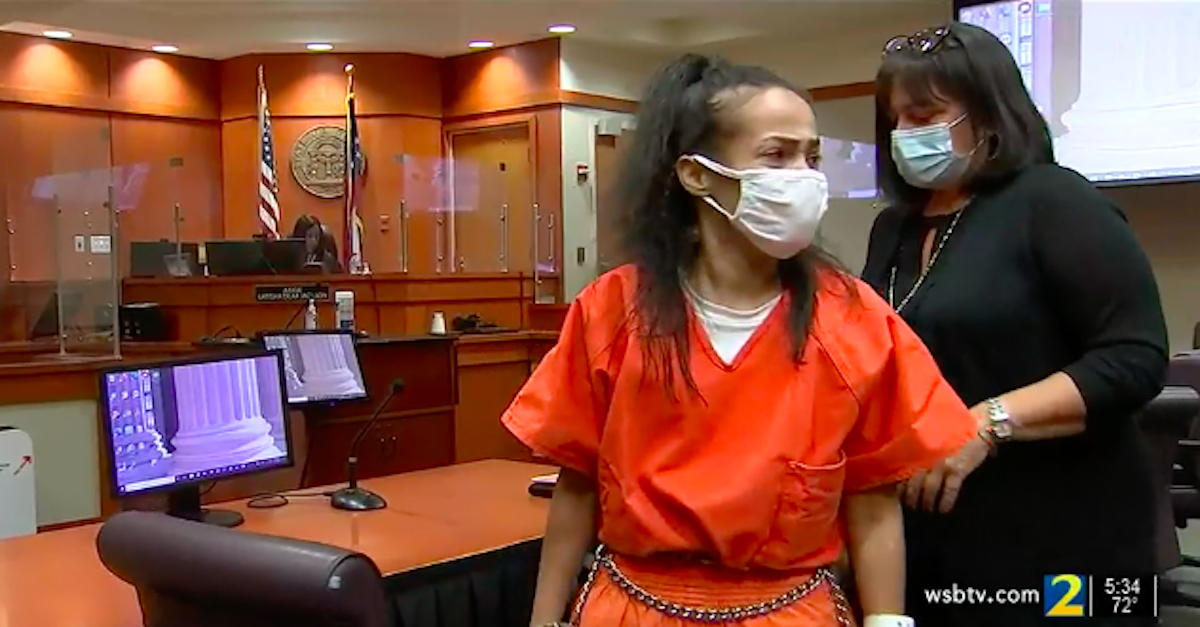 Santana Miller appearing in court with her attorney Stacey Levy

A judge in Georgia denied bond for a woman accused of fatally shooting an innocent man last month during the frantic search for her cousin’s missing baby, Atlanta ABC affiliate WSB-TV reported. Santana Miller, 34, was arrested after police said she and her brother, 38-year-old Delarius Miller, shot and killed Aziz Hassan, 60, while amongst a group of family and friends who had gathered to hunt for the recently kidnapped Blaise Barnett.

The 1-year-old child was in the backseat of his parents’ SUV in the early morning hours of Nov. 10 when the vehicle was reportedly stolen from in front of their home in Clarkston. The parents’ SUV was found abandoned outside the Brannon Hill Condominiums Wednesday afternoon but Blaise was not inside.

Desperate to find the abducted toddler, police said friends and family of the child’s parents gathered together at the apartment complex and began going door-to-door looking for Blaise. Several members of the search party, including the Millers, reportedly brought firearms. The Millers are reportedly cousins to Blaise’s father, Xavier Barnett.

Apartment residents previously told WSB that they were terrified of the armed vigilantes, who were said to be shouting loudly as they went from home to home.

According to the report, prosecutors on Friday told the court that Miller and her group of searchers “tried to storm into Hassan’s apartment” but were turned away. Hassan ran into the group again later that night in the parking garage of the complex because he reportedly thought that they had broken into his car. After a confrontation, the Millers reportedly opened fire on Hassan. He was pronounced dead on the scene later that evening.

When police arrived on the scene, the Millers reportedly told investigators that Hassan had fired shots at them before they returned fire. The brother and sister duo were taken into custody and charged with murder.

The child was found safe Thursday—nearly 36 hours after he went missing—in a car parked in the driveway of a home less than a mile from his home. Police have maintained that there is no evidence that Hassan had anything to do with the abduction.

Santana’s attorney, Stacey Levy, reportedly argued that her client felt threatened by Hassan and claimed her conduct following the shooting showed she was not a flight risk.

“My client spoke with police, admitted to having a lawful firearm,” Levy reportedly said. “Staying around and giving a statement shows she’s not a flight risk.”

Hassan’s family attended Friday’s proceeding where his daughter reportedly broke down in tears when she faced Santana Miller for the first time.

“My father was innocent. I don’t want the murderers of my father to see the outside of a prison cell,” Firmesk Sardarkhan told the court. “Your honor, all I and my family want is justice for my father.”

According to WSB, Santana Miller was “emotional” throughout the proceeding, but the judge still denied her request to be granted bond.