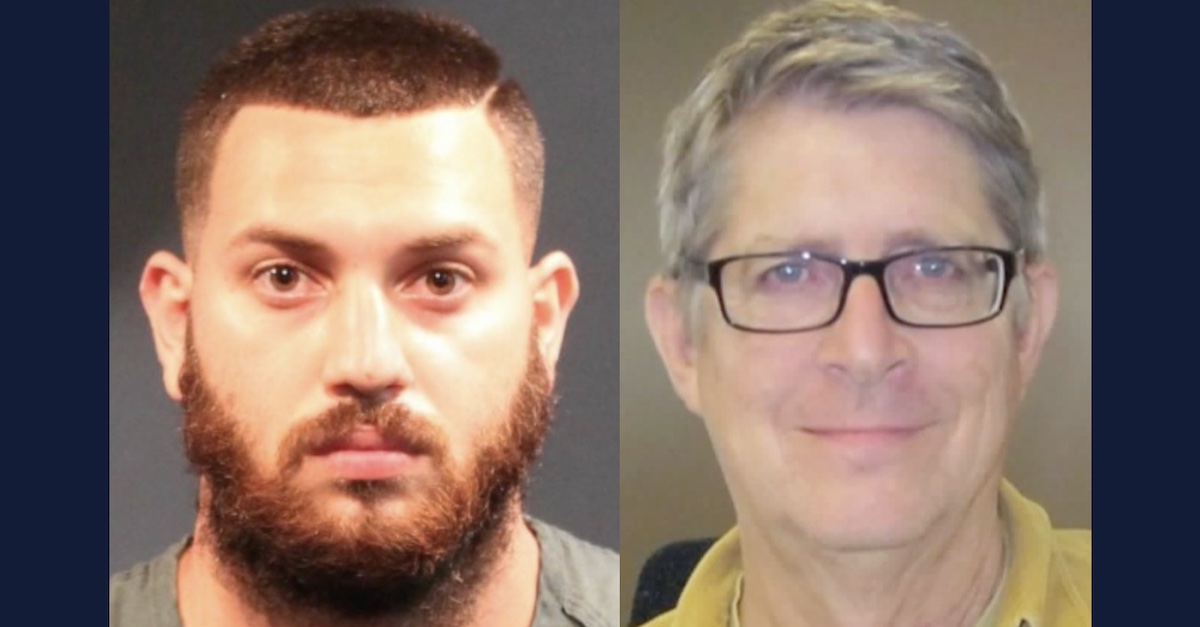 Louie Villa (left) was sentenced on Friday, Oct. 7, 2022, for the murder of Gene Harbecht (right), a newspaper editor who died after Villa crashed into his truck while drunkenly driving his BMW in Santa Ana, California, on June 30, 2020. (screenshots from KTLA 5 in Los Angeles)

The wife of a journalist killed by a repeat drunken driver hugged the handcuffed man and kissed his cheek after he apologized during his sentencing Friday in Santa Ana, California.

Patrica Harbrecht’s husband, Orange County Register editor Gene Harbrecht, died on June 30, 2020, after a BMW driven by Louie Robert Villa, 31, slammed into his pickup truck in what prosecutors have described as a street race with another driver.

Jurors in August split 10-2 on a misdemeanor street racing charge, but they unanimously agreed Villa was guilty of felony murder, which led a sentence imposed Friday of 15 years to life in prison.

Harbrecht was returning from lunch when he happened to drive near Villa and Ricardo Tolento, who prosecutors say was in his Infiniti racing Villa’s BMW.

Tolento, 26, is awaiting trial on a felony charge of vehicular manslaughter with gross negligence while engaging in a street race and one felony hit and run causing permanent injury or death and one misdemeanor count of street racing.

The charges carry a maximum 11 years, but Villa faced the more serious murder charge because of a previous drunken driving conviction in 2012. Under California law, anyone convicted of drunken driving is warned that if they do it again and someone is killed, they can be charged with murder.

It’s called a Watson advisement, after the last name of drunken driver Robert Lee Watson, whose 1981 California Supreme Court case established he could be charged with second-degree murder for a crash that killed driver Penny Maillet and her six-year-old daughter, Michelle Maillet, in Redding, California, in 1979.

Orange County District Attorney Todd Spitzer referenced the advisement in a press release Friday, saying, “Watson murders are some of the most tragic cases we prosecute because all too often the victims are completely innocent people and the defendants didn’t wake up that day intending to commit a murder, but regardless of what they intended an innocent person was left dead as a result of their choices.”

“Nothing will bring Gene Harbrecht back to his wife and loved ones; but hopefully his death will be enough to redirect the trajectory of his murderer’s life after he completes his prison sentence – and it will serve as a warning to anyone else who wants to get behind the wheel drunk or high and race on Orange County’s streets,” Spitzer continued. “The Orange County District Attorney’s Office will vigorously prosecute illegal street racing and driving under the influence cases to the fullest extent of the law.”

Prosecutors say Villa’s BMW is the car that struck Harbrecht’s truck as Villa and Tolento “began racing next to each other at the intersection of 17th Street and Bristol Street in Santa Ana around 11:40 a.m.”

“Villa was seen pulling ahead of Tolento’s Infiniti shortly before crashing into a pickup truck making a left turn onto Santa Clara Avenue at Bristol Street,” according to the release.

The crash rendered Villa’s BMW inoperable, and he was arrested at the scene. Tolento was arrested shortly after driving away from the crash without trying to help Harbrecht.

Harbrecht had worked at the Register since 1984. At the time of his death, he was the national and international news editor for the Southern California News Group, which includes the Register and 10 other newspapers.

Many of his coworkers learned of his death after he didn’t call into the 1 p.m. newsroom meeting that day as scheduled. A couple editors saw TV coverage of the crash and thought they recognized Harbrecht’s truck in the wreckage.

Villa apologized to Harbrecht’s widow Friday, “expressing remorse for his actions and promising to change his ways,” according to the release.

“Following the court hearing, Patricia Harbrecht hugged a handcuffed Villa and kissed him on the cheek,” the release said.