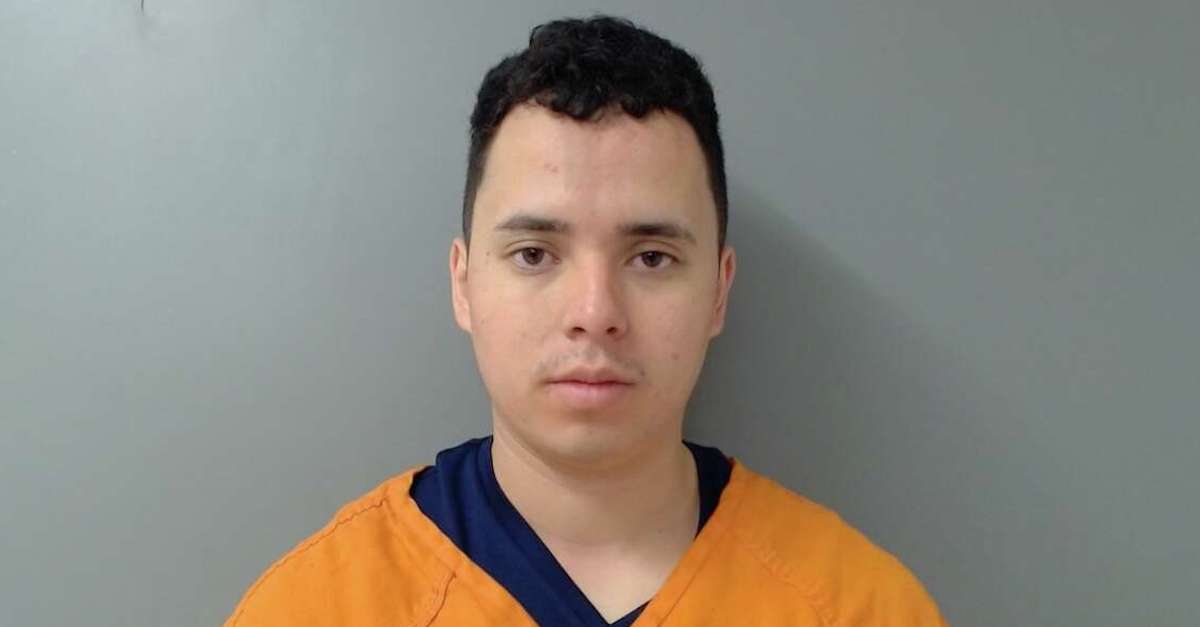 A 23-year-old correctional officer at a Texas jail found himself behind bars last week for allegedly driving drunk and telling the police officer who performed the traffic stop that they were “on the same side.”

Abraham Villarreal was taken into custody on Tuesday and charged with one count of driving while intoxicated with a blood alcohol concentration (BAC) over 0.15, at least double the legal limit for the state, records reviewed by Law&Crime show.

A sergeant with the Laredo Police Department at approximately 12:35 on Nov. 8 spotted a maroon Mazda traveling at 75 mph on the 9100 block of McPherson Road, which has a speed limit of 35 mph, according to a probable cause affidavit obtained by The Laredo Times.

The sergeant reportedly wrote that he made a U-turn, got behind the Mazda, and pulled the vehicle over in the El Querreque Grill located in the 9700 block of McPherson Road. There were two people inside of the car and the driver exited the vehicle upon the sergeant’s command, per the affidavit.

“However, as the driver exited, [the sergeant] immediately noticed that he staggered and appeared to have a lack of coordination,” the affidavit reportedly states, adding that the driver also appeared to have “glossy, watery eyes, and slurred speech.”

After identifying the driver as Villarreal, the sergeant reportedly asked why he was speeding.

“What do you mean bro? The truck in front of me was much faster,” Villarreal reportedly said in response.

The sergeant reportedly told Villarreal that he had just clocked him going 75 mph in a 35 mph zone. Villarreal reportedly responded by once again stating that the truck in front of him was going far faster than him. As the sergeant got closer to Villarreal, the officer smelled “a strong odor of alcoholic beverages emitting from his breath and person,” the report states.

When the sergeant asked whether Villarreal had any weapons on his person or in his vehicle, the jailer reportedly responded by letting the officer know that he worked in law enforcement

“At that moment, Villarreal stated that he did not have any weapons. However, Villarreal identified himself as a Webb County jailer [off-duty] and stated he had his Sam Browne work belt in the vehicle along with accessories [i.e. handcuffs, flashlights, etc.],” the affidavit reportedly states. “Based on Villarreal’s red/watery/glossy eyes, slurred speech and difficulty maintaining his balance, [the sergeant] suspected that [Villarreal] was intoxicated.”

Villarreal then failed a field sobriety test and was placed under arrest, the affidavit reportedly states. While in the back of the sergeant’s car, Villarreal allegedly brought up his job again.

“While on route to Laredo PD headquarters, the defendant repeatedly told [the sergeant), ‘We’re on the same side! We’re both law enforcement! C’mon man!'” the affidavit reportedly states.

Upon arriving at the Laredo Police Department station, Villarreal’s BAC was reportedly recorded at 0.17 with a breathalyzer.

“I remind the public that as a representative of this agency and the community, our correctional officers are held to a higher standard on or off duty,” he reportedly said. “We will move forward and let justice take its course.”