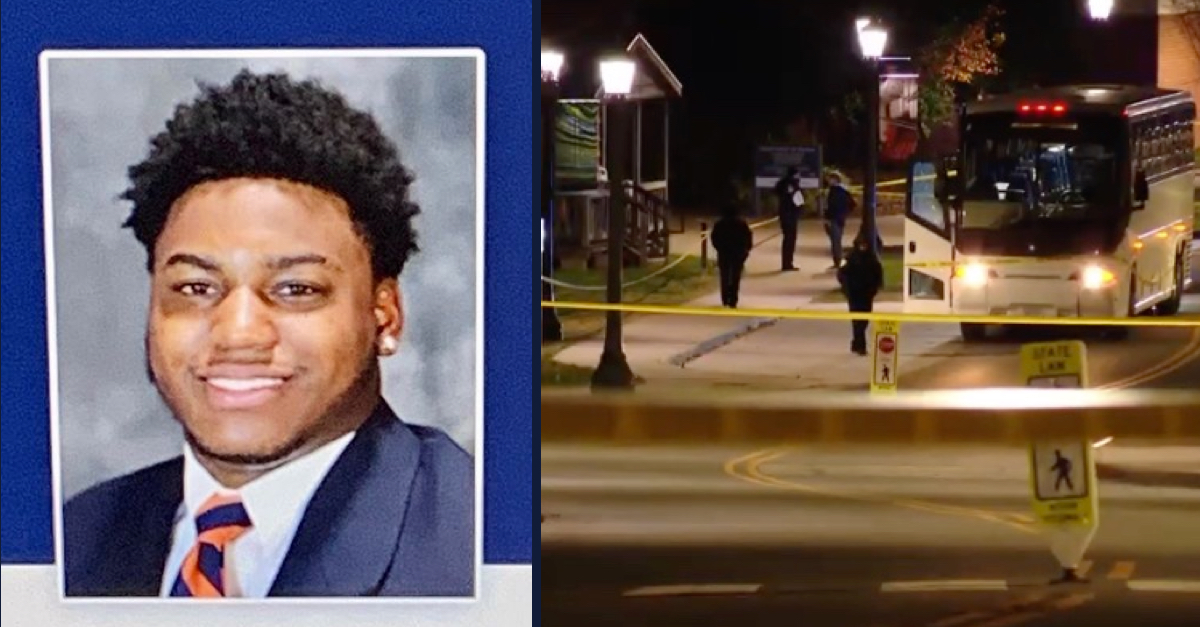 The suspect in the fatal shooting at the University of Virginia that left three student-athletes dead and two others injured has been taken into custody and is facing multiple murder charges.

Christopher Darnell Jones, 22, who had previously played football for UVA, is believed to have opened fire inside a chartered bus carrying around two dozen students on Sunday night, according to UVA officials. The bus was located at a parking garage on the school’s campus in Charlottesville. Police first received emergency calls around 10:15 p.m. on Sunday, and when they arrived at the scene, two students were found dead inside the bus.

Three other students were injured. One of those students died after being transported to the hospital, UVA Police Chief Timothy Longo said in a press conference Monday morning.

Jones fled the scene, according to officials.

University President James Ryan identified the students as Devin Chandler, a second-year student; Lavel Davis, a third-year student; and D’Sean Perry, a fourth-year student. All three were players on the UVA football team.

Officials did not provide information on the two injured students.

Jones himself had also played football at UVA, but hadn’t been on the team for at least a year, according to Ryan, who confirmed that Jones was a UVA student.

Longo, who said at the start of the press conference that Jones was still at large and was to be considered armed and dangerous, was briefly interrupted during the press conference by someone who he referred to as “captain” and who was seen speaking quietly into the police chief’s ear. A moment later, Longo announced that Jones had been apprehended.

“We’ve just received information that the suspect is in custody,” Longo said.

The police chief was silent for a moment, and then said: “I need a moment to thank God and breathe a sigh of relief.”

Police in Henrico County, some 80 miles southeast of Charlottesville, announced on Twitter that officers had taken Jones “into custody, without incident[.]”

Prior to receiving the information that Jones had been apprehended, Longo had said that Jones had come to the attention of UVA’s threat assessment team in September after a “third party” unaffiliated with the university said that Jones had “made a comment about possessing a gun.” Longo said that alleged statement “was not made in conjunction with any threats,” and a follow-up investigation appears to have not revealed information about an actual weapon.

Longo also said that Jones had been involved in a “hazing investigation of some sort” that had closed due to a lack of witnesses who would cooperate with the investigation. Longo added that James was reportedly involved in a “prior criminal incident involving a concealed weapon” in February of 2021 that occurred outside Charlottesville.

The chartered bus was carrying members of the UVA football team who had returned from a field trip: they had gone with their class to see a play in Washington, D.C. Officials didn’t reveal whether Jones was in that class or not.

Prior to Monday’s press conference, authorities had lifted a shelter-in-place order to residents and students.

“We’re reasonably confident that the person responsible for this tragedy is not on our grounds,” Longo said.

Ryan said that the “entire university community” is grieving, and implored members of that community to help and support each other.

“Please reach out and lend each other an ear or a shoulder, even if virtually,” the school president said.

[Image of Jones via UVA Police. YouTube screengrab via WVEC.]