‘We May Need to Adjourn’: Zoom Assault Hearing Goes Off the Rails After Court Discovers Alleged Abuser in the Same Apartment as Alleged Victim (WATCH) 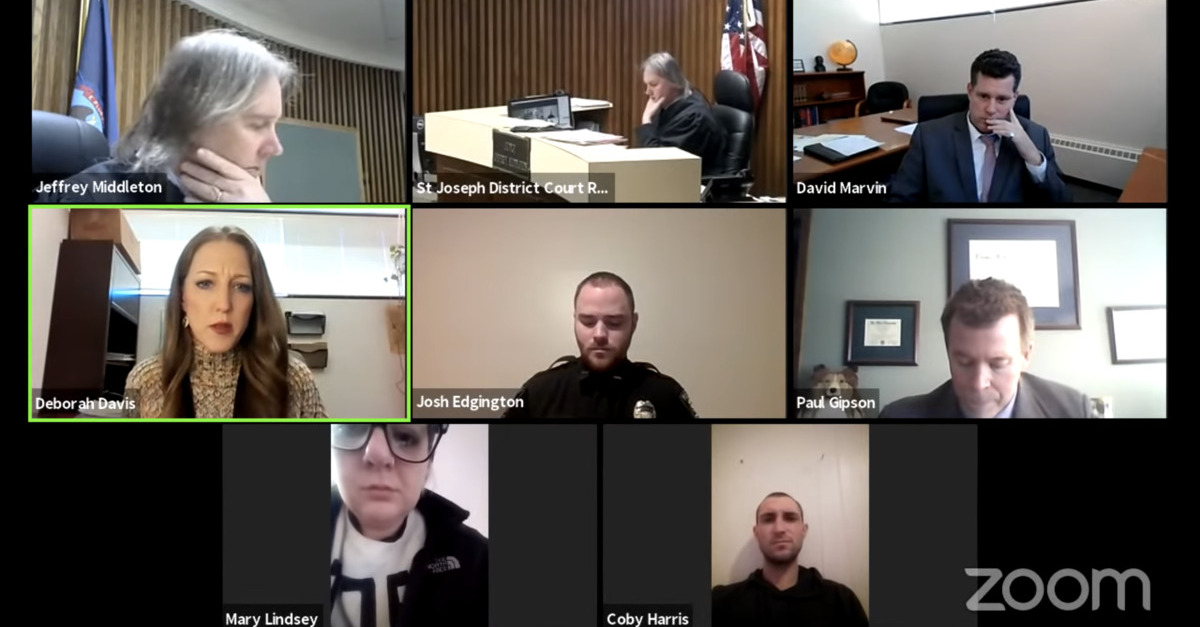 A Michigan court hearing involving assault charges was postponed earlier this week after the alleged abuser was discovered at the home of the alleged victim during the remote hearing itself.

Coby James Harris, 21, is accused of assault with intent to do great bodily harm less than murder, an attack statutorily comparable to strangulation. The charge stems from a Feb. 9 incident that occurred in Sturgis, Mich., according to the Sturgis Journal. Conviction carries a maximum sentence of 10 years in prison, a $5,000 fine, or both.

The reported victim in that attack is Mary Lindsey. During the digital Zoom hearing on Tuesday, she said the assault happened after the two, who were dating at the time, had a short argument.

While quizzing Lindsey about the original 911 call over an objection from the defense, Davis spoke up and told the court that she believed Lindsey and Harris were near one another based on the the former’s verbal cues and body language.

“Your honor,” the prosecutor’s assistant said before briefly dispensing with a hearsay objection, “I have reason to believe that the defendant is in the same apartment as the complaining witness right now, and I am extremely scared for her safety. The fact that she’s looking off to the side and he’s moving around, I want some confirmation that she is safe before we continue.”

In the video, uploaded to Judge Jeffrey Middleton’s YouTube channel, Harris can be seen shaking his head to apparently indicate “No.”

“Ms. Lindsey, where are you right now?” the judge asks.

The alleged victim hesitates a moment before saying: “Um, I’m at a house.”

“What’s the address?” the judge presses.

“It’s my house,” Lindsey says after looking to her side for several seconds.

Lindsey eventually gives an address in Sturgis before the same inquiry is directed to Harris—who instantly answers by giving a different address.

Judge Middleton then confirms that Harris is dialed into the digital conference using a phone. After that, he asks Harris to go outside and take a picture of the address—which clearly and audibly catches the defendant off-guard.

“Um. Wh…y?” he asks. “I don’t even think this phone has the charge for that, sir. I’m at like two percent right now. I’m hooked up to this wall charger right here.”

Davis then interrupts to note that police are waiting outside Lindsey’s door and knocking to be let inside.

The alleged victim then goes to speak with police before her line hangs up. Harris’s line quickly goes dark as well.

“We may need to adjourn this, your honor,” Davis tells Middleton—who says it appears that the defendant is at the same address as the witness. “We would ask that his bond be canceled.”

Roughly two minutes passes as the court attempts to confirm the new allegation.

As Lindsey’s line comes back on and Harris addresses the court, Davis presses her hands against her face.

Harris then pleads for forgiveness as he’s being handcuffed.

“Your Honor, me and Mary both don’t want the no-contact,” Harris says. “I ask that that be dropped. I’m sorry I lied to you. I knew the cops were outside. I don’t know why I—”

The judge then interjects.

“Mr. Harris, my advice is, don’t say anything else,” Middleton tells the defendant. “The hearing is adjourned. Your bond is canceled. If you have $10 million, you can’t bond out. In addition, the prosecutor’s probably also going to charge you with obstruction of justice.”

The judge goes on to say that he thinks only Harris wants the bond conditions lifted and notes that the incident marks “the first time I ever had anybody sitting in the next room potentially intimidating a witness to assault with great bodily harm.”

Harris attempts to plead his case one more time.

“I never attacked her,” he says.

“Alright, don’t say anymore about it,” Middleton demands. “Your bond is canceled. You hit rock bottom and you’re continuing to dig.”

Watch the court proceedings below: