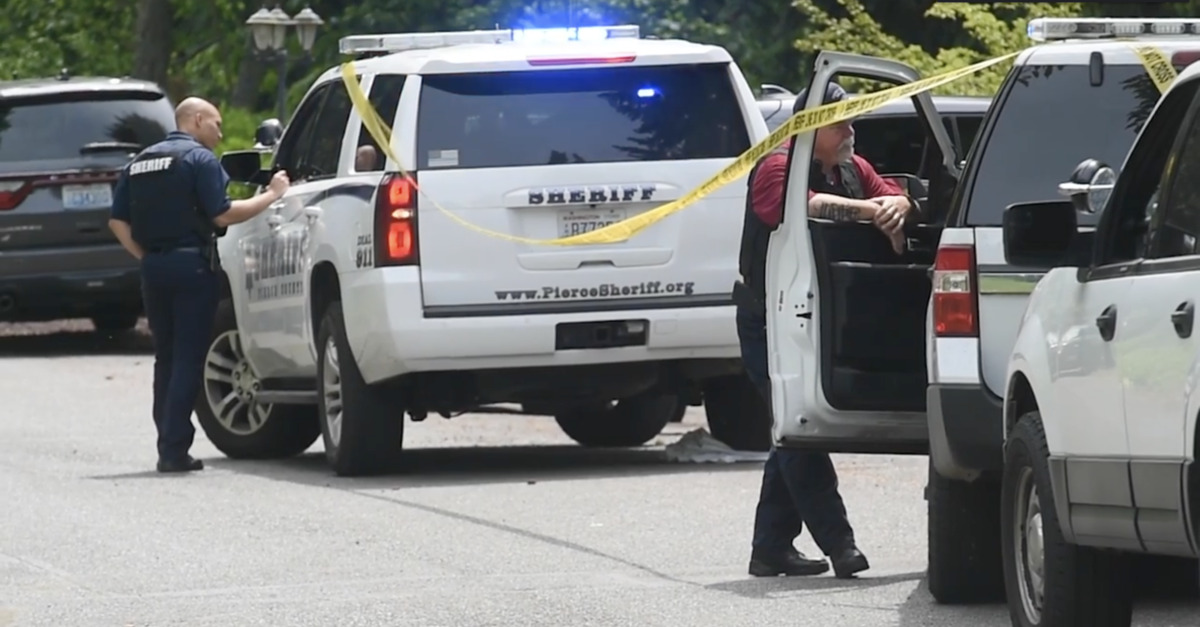 A Washington State man has been charged in the murder of his parents from late last month. According to police, the suspect used at least six different weapons to kill his mother and father, the latter of whom was identified on Tuesday.

Zachary Rorvik, 29, is believed to have a history of mental illness. He stands accused of killing Mark Steven Rorvik, 59, and his 61-year-old mother, who has yet to be publicly named, on May 30.

The younger Rorvik is currently booked on two counts of murder in the first degree, according to court records reviewed by Law&Crime. A not guilty plea was entered on his behalf at a June 1 arraignment.

According to charging documents surveyed by the Tacoma, Washington-based News Tribune, the defendant allegedly walked to his parents’ house around midnight on the day in question and waited on their back porch for several hours as he slowly worked up the courage to finally enter the premises because he was “pretty sure he was going to kill them,” citing his original interview with homicide detectives.

Rorvik allegedly confronted his parents once inside and the pre-planned attack began–quickly leading to a grisly scene.

Prosecutors say the mother fought back and tried to get her son to leave by pushing him out of the house. Instead, she was allegedly stabbed in the head and the stomach. Rorvik then allegedly turned his attention to his father, who gave chase.

“[I]t appears that he used knives, scissors, a machete, a drill, a wheel chock and a tree branch to assault and kill his parents,” Pierce County charging documents cited by the News Tribune allege.

A neighbor cited in the court papers told law enforcement that they heard the screams. It was around 9:30 a.m. on Sunday, May 30.

The neighbor reportedly left their house and walked down their driveway to see if they could find out what was causing the alarming disturbance. The witness reported seeing the accused son holding a machete as his father hid behind a car, so they returned to their residence to dial 911–and to arm themself with a pistol.

The neighbor said they spoke to 911 “briefly” before trying to force Rorvik to “stand down,” in comments to local NBC affiliate KSDK.

The neighbor claimed that they returned to where Rorvik had allegedly been menacing his father with the large blade and fired a warning shot at the suspect in an attempt to scare him off. The neighbor said they tried help the father. That’s when the witness says they heard more screams–this time coming from a woman inside the Rorvik house.

As deputies arrived, the elder Rorvik was standing atop the stairs. The father was covered in blood but still alive then–puncture wounds marring his face, neck and head. He later died in a nearby hospital.

Investigators allege that they followed a literal trail of blood to find the defendant’s mother. She was lying on the ground outside of the house and was already dead. The machete and a blood-covered tree branch were reportedly discovered close to the woman’s corpse.

According to the News Tribune, two of Rorvik’s sisters said their brother has a history of mental illness.

As far as a motive is concerned, authorities believe that Rorvik was angry about being kicked out of his parents’ house two years ago. He apparently believed he was the rightful owner of the property.