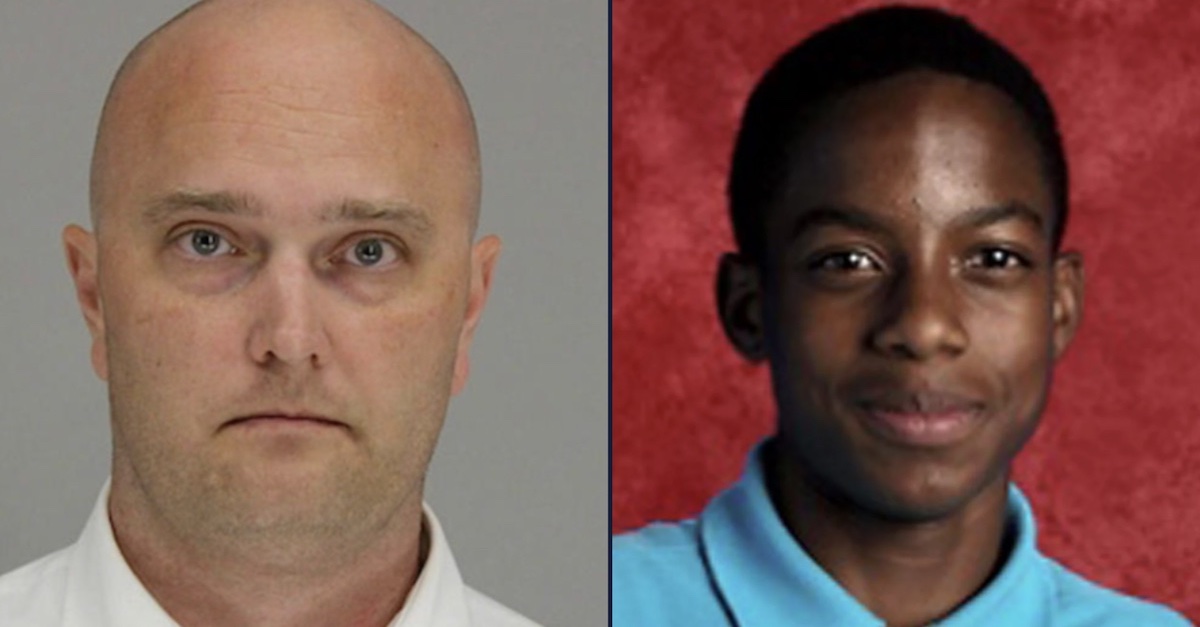 A white former police officer in Texas lost an appeal this week seeking to overturn his conviction for the murder of a Black teenager in 2017.

The ex-Balch Springs police officer Roy Oliver was found guilty nearly four years ago of murdering 15-year-old Jordan Edwards by shooting into a 2004 Chevrolet Impala full of teenagers as the vehicle left a house party.

Nerves were tense on the night in question. Oliver and his partner Tyler Gross had been dispatched to deal with a noise disturbance due to the party. Awhile after the officers arrived, unaffiliated gangs started shooting. Edwards, a model student and high school freshman, and his friends were scared and trying to leave.

Then, Oliver fired a rifle five times into the back of their car.

The initial police story about the circumstances of that shooting, claiming the Impala backed up toward the other officer aggressively, was not true, according to ABC News. Video footage showed the car was actually driving away from police at the time. Gross would testify that he never thought his life was in danger, according to Dallas-based Fox affiliate KDFW.

Oliver was subsequently fired. He was charged with murder and tried by then-Dallas County district attorney Faith Johnson.

The trial was broadcast by the Law&Crime Network. Taking the stand in his own defense, Oliver testified that he thought he saw a certain look on his partner’s face – leading him to think the shots came from the car Edwards was in. Gross, as noted, disputed that.

Additionally, jurors learned that Oliver “flipped off” the car after unloading several bullets and killing Edwards.

Ten women and two men found him guilty in August 2018. Oliver was convicted of murder but acquitted on two lesser charges of aggravated assault with a deadly weapon by a public servant.

A stirring moment came during the sentencing phase when Oliver’s own half-sister testified against showing the defendant mercy.

“I came here to do something right for Jordan Edwards,” Wendy Oliver said, according to a write-up of the proceedings by the Washington Post. “It ate me up. Jordan didn’t do anything to be shot.”

In the end, the defendant was sentenced to 15 years in prison and a $100,000 fine. The victim’s family had hoped for a longer sentence but accepted the verdict as the beginning of justice.

Oliver is currently eligible for parole in 2026. He recently filed an appeal with the Texas Court of Criminal Appeals, which is the Lone Star State’s co-highest court and only focused on criminal matters. The second co-highest court is the Supreme Court of Texas, which is solely concerned with civil matters.

The defendant claimed that his right against self-incrimination was violated because he gave a statement to an internal affairs investigator after being threatened with losing his job if he declined to talk.

The Texas court initially heard his appeal but switched course – determining that, procedurally, the court actually should not have even considered the Oliver’s appeal in the first place.

The one-paragraph-long opinion reads, in full:

Appellant, Roy Oliver, a police officer, shot a teenager leaving a high-school party with his brothers and some friends. Appellant was convicted of murder, sentenced to 15 years’ confinement, and fined $10,000. Following the shooting, Appellant gave a statement to an internal affairs investigator after he was told that he could be fired if he did not. In Garrity v. New Jersey, 385 U.S. 493, 500 (1967), the Supreme Court held that statements of police-officer defendants given on threat of employment termination are involuntary and that use of those statements by the prosecution violated the defendant officers’ right against self-incrimination. Appellant argued at trial that the initial burden was with the State, but the trial court disagreed. The court of appeals affirmed the ruling of the trial court in an unpublished opinion. Appellant filed a petition for discretionary review, which we granted, asking us who bears the burden to demonstrate that a Garrity statement was not used in any way by the prosecution. Having considered the parties’ briefs and the record, however, we conclude that our decision to grant review was improvident. We therefore dismiss Appellant’s petition for discretionary review as improvidently granted.