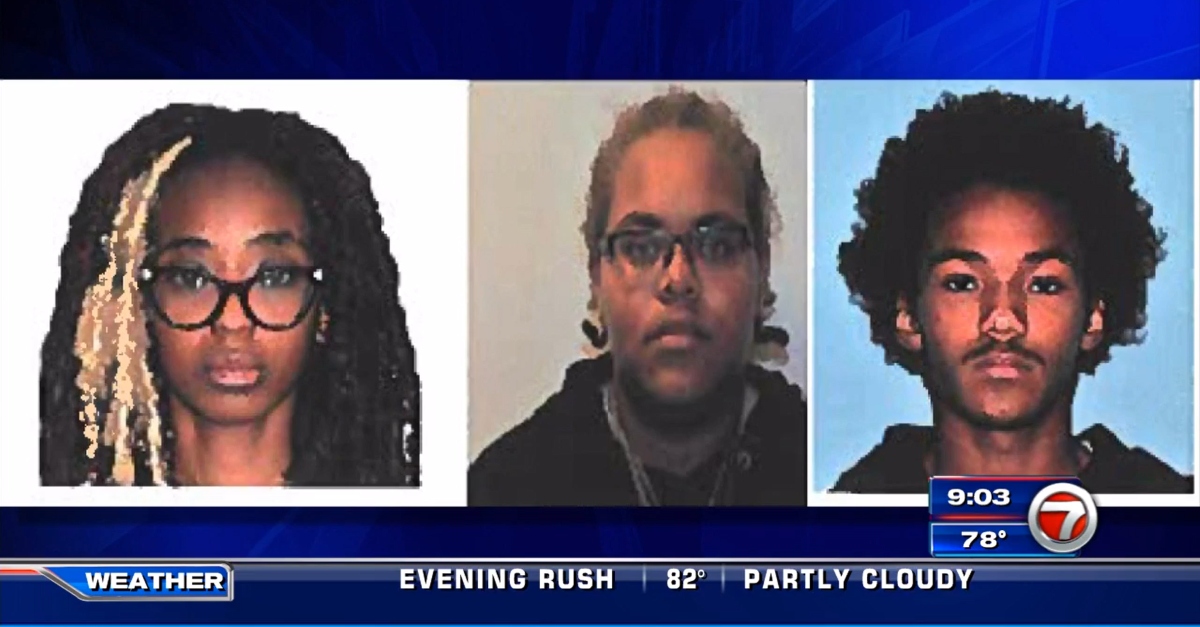 Three teenagers allegedly ambushed and killed a young man over a romantic squabble in Miramar, Florida. Victim Dwight “DJ” Grant, 18, had sex with the ex-girlfriend of Andre Clements, 17, who got so mad he recruited two girls to help him commit murder, according to cops in affidavits obtained by WSVN.

May our forever Patriot Rest In Peace. Please pray for Dwight Grant’s family, friends and our community. I spoke with Ms. Grant to offer our condolences on behalf of the Patriot family. We will have grief counselors available on Thursday & Friday. We are here for you. pic.twitter.com/Dm9Fl2GsRl

“It’s horrifying, and he was such a good child” a neighbor told the outlet. “His mother loved him. I can’t even think something could happen like that. It’s terrifying.”

A friend of Grant’s family said much of the same about the young man.

“Never had a problem with him, whether he stayed in the house, stayed out of trouble,” he said.

Going by the alleged texts, Parisienne appeared gung-ho about helping.

“I would help you, but you becoming a murderer right now isn’t what is needed,” Parisienne allegedly wrote.

“Oh–see, that I can help with,” Parisienne allegedly answered.

“This Sunday or next?” Clements allegedly wrote. “You choose.”

Parisienne allegedly said she had to go to her aunt’s birthday party the following Sunday, but she said she could give her mother an excuse if Clements was impatient.

They allegedly recruited Jaslyn Smith, 16, to help in the Oct. 17 attack.

Parisienne allegedly called Grant, and lured him to a stairwell at her apartment complex, where Clements and Smith ambushed him and attacked him for 31 minutes. Parisienne acted as a lookout, while Grant pleaded for his life, authorities said.

“You know I have to kill you now,” Clements allegedly said, grabbing a sword and stabbing Grant in the neck.

Grant told him to end it, police said. Clements allegedly stabbed him in the chest with the sword. The three teenagers carried the victim’s body and dumped it over a railing 30 feet from his apartment, cops said.

One of the co-defendants was Clements’s current girlfriend, according to the affidavits as reported by NBC Miami.

Under Florida law, authorities are allowed to release certain juvenile records, including a defendant’s name and photograph, if the crime the juvenile is suspected of committing would be a felony if it was alleged to have been committed by an adult.

Clements, Parisienne, and Smith are charged with first-degree murder, criminal conspiracy, and tampering with evidence.

“The state, I’m sure, is doing more investigation, and they’re going to have to make a very serious decision as to whether or not 17-year-olds are going to be charged as adults,” Parisienne attorney Peter Butlien told WSVN.

The Broward County State Attorney’s Office confirmed that they will seek to charge them as adults.

“The three suspects in the homicide of Dwight Grant will be charged as adults,” Broward State Attorney Harold F. Pryor said in a statement obtained by Law&Crime. “A team of senior prosecutors reviewed all of the available evidence and circumstances before this decision was made today. Formal charges will be filed in the coming weeks. If this case were to be handled as a juvenile matter, the maximum term of residential treatment would be 36 months prior to release. A juvenile charge would mean that the person would be released after three years in the system and could only be kept under supervision in the community until age 21.”

Smith’s mother declined to comment to WSVN when they reached her at her apartment Monday.

Court is scheduled for Nov. 4.

Update – 2:00 p.m.: We added a statement from the prosecutor’s office.