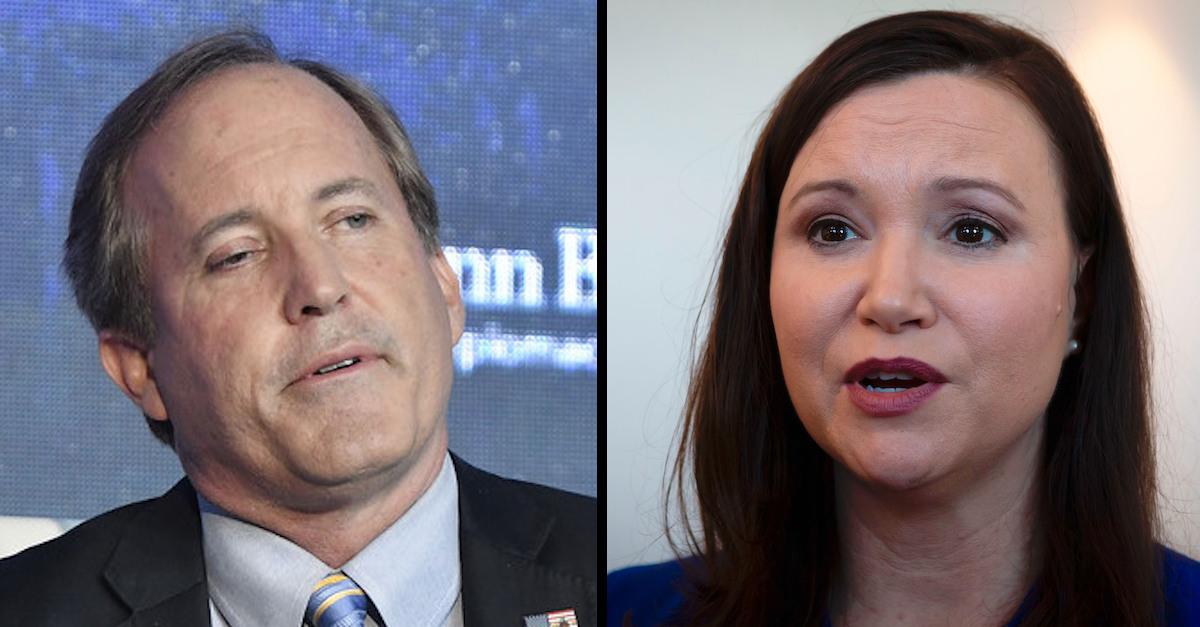 Texas AG Ken Paxton (R) attempted to sue the states of Georgia, Pennsylvania, Michigan and Wisconsin over alleged “irregularities” in states won by President Joe Biden late last year. Republicans were hoping wins in those key states would instead be handed to  Donald Trump.

Florida AG Ashley Moody (R) spoke out in support of the Texas lawsuit shortly after it was filed. The cache of emails indicates that some of those who work for Moody were not impressed by her desire to connect her state with the since-failed litigation.

In Florida, Senior Deputy Solicitor General Christopher Baum reacted to the origination of the Texas lawsuit in negative terms.

“Batshit insane,” Baum said, “which is why Kyle [D. Hawkins] is not on it. Must be the only guy in the Texas AG’s front office who didn’t quit/wasn’t fired for alleging that Paxton committed crimes.”

Hawkins is the former solicitor general of Texas. Baum then explained perhaps why Hawkins was not on the case.

“I bet this royally pisses off the Republican SGs currently arguing that the Court’s original jurisdiction is mandatory. Because this is Exhibit A for why the Court does not want to go down that road.” (When the Supreme Court rejected Paxton’s suit, conservative Justices Samuel Alito and Clarence Thomas said they did not believe the court had “discretion to deny the filing of a bill of complaint in a case that falls within our original jurisdiction,” which the two justices had said said before.)

“What’s the theory for how one state has standing to allege Bush v. Gore violations against another state…” Chief Deputy Solicitor General James Percival asked.

“‘Because,'” Baum replied — enclosing his own word in his own quotes in perhaps a cheeky sort of manner.

“They try to cover that starting at page 68 of the pdf,” Ezray noted. “They say they suffer harm as a state when other state’s violate ‘constitutional’ election law and that they bring parens patriae claims for their electors.” (Parens patriae claims are where the government seeks to act as a legal protector of citizens unable to protect themselves.)

“[W]hich would be true in any election case,” Baum replied.  =”So Massachusetts has standing to sue Mississippi for illegally gerrymandered districts?”

“It also seems weird to cite Marbury v. Madison for the proposition that the court should get involved in a political dispute,” Percival wrote elsewhere.

“My question is: have they asked Florida to join?” asked Chief Deputy Solicitor General Jeffrey DeSousa.

“Someone will draft an amicus and ask us to do so,” Baum posited.

“Jonathan Williams points out that perhaps this is Paxton’s request for a pardon,” Baum said — referencing commentary that Paxton’s lawsuit on behalf of the State of Texas was politically motivated by his own self-interest.

When contacted by the Tampa Bay Times for comment, a spokesperson for AG Moody rubbished the messages as a “water cooler conversation by a few employees in response to breaking news and prior to any request to join a jurisdictional brief.”

“There was strong legal analysis to support the Supreme Court hearing and deciding this case on such a novel issue,” the spokesperson continued.

The emails were obtained by American Oversight, which the Times described as “a progressive-leaning group” that files open records requests. The executive director of the organization trashed Moody’s connection to the anti-election-outcome litigation as having involved “baseless” legal arguments and “a gross misuse of official resources in service of the ‘big lie’ and putting party over country.”

As Law&Crime previously reported, the Supreme Court on Dec. 11, 2020, declined to hear the case Paxton, Moody, and other Republicans yearned to litigate.

“The State of Texas’s motion for leave to file a bill of complaint is denied for lack of standing under Article III of the Constitution,” the high court wrote. “Texas has not demonstrated a judicially cognizable interest in the manner in which another State conducts its elections. All other pending motions are dismissed as moot.”

Top prosecutors from Missouri, Alabama, Arkansas, Florida, Indiana, Kansas, Louisiana, Mississippi, Montana, Nebraska, North Dakota, Oklahoma, South Carolina, South Dakota, Tennessee, Utah, and West Virginia, all of whom were Republicans, eventually asked the Supreme Court to take the case.  A few other states, including Arizona and Ohio, filed separate amicus briefs.  A group of other states and the District of Columbia filed papers to oppose the Texas litigation.

Paxton, et al., demanded a multi-pronged desired outcome, as the original request to the Supreme Court indicated. In general, Paxton and his allies complained against local regulation of local elections and of the delegation of some electoral authorities by state legislatures to experts — generally secretaries of states and other full-time election administrators — and wished the Supreme Court to pen a novel constitutional remedy that would declare the elections in Pennsylvania, Georgia, Michigan, and Wisconsin to have been administered in violation of the Electors Clause and the Fourteenth Amendment. They asked the Supreme Court to declare that the electoral votes in those states could not be counted, a court-ordered “special election” in those four states only.

The Supreme Court didn’t buy the argument and swiftly torpedoed the litigation.

[Image of Paxton via Gabriel Aponte/Getty Images for Concordia Summit; image of Moody by Eva Marie Uzcategui/AFP via Getty Images.]