‘Those Children Were Innocent’: Two Adults, Two Children Dead in What Police Say Was a Triple Murder and Suicide in Suburban Texas 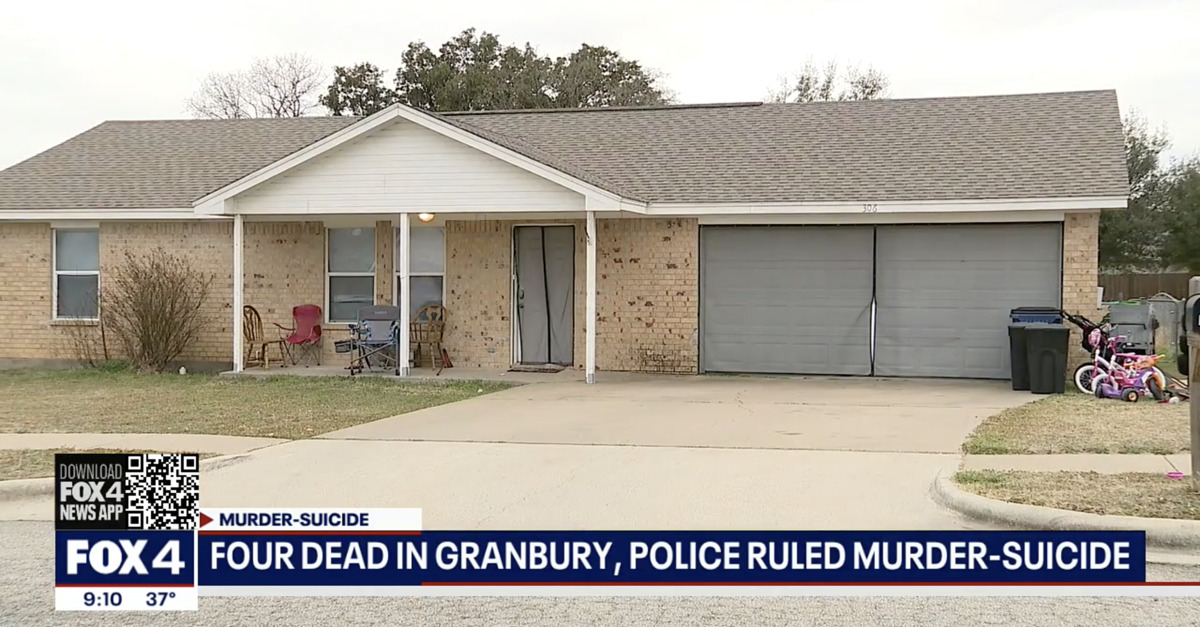 Four people have been killed in a triple murder-suicide in North Texas.

According to the Granbury Police Department, a welfare check late Thursday afternoon led to the gruesome discovery of four bodies inside of a suburban house on the 300 block of Kathy Lane.

The small town of Granbury is located in Hood County and is located some 35 miles south-southwest of Fort Worth.

Each person inside had been shot to death, authorities said. The apparent assailant had then committed suicide. But details are presently scarce and police are keeping mum. The identity of the perpetrator of the horrific violence has not been confirmed as of this writing.

“[T]here was evidence at the scene that was consistent with a murder-suicide,” police told Dallas/Ft. Worth NBC affiliate KXAS.”[A]t this time, there is no evidence of anyone else being involved in this incident.”

According to news reports, authorities said Marcus Buchanan, 36, and Rita Buchanan, 34, were the adults found inside the house. The names of the children have yet to be released, but authorities identified their ages as 13 and three years old.

According to Dallas ABC affiliate WFAA, law enforcement also stopped short of listing the relationship among the four deceased individuals.

The assumption among neighbors, however, is that an entire family of four has now been taken away forever.

Crystal Blanchard lives just across the street from the massacre and described a sense of both “shock” and “disbelief” at what occurred in her otherwise sleepy and relatively safe neighborhood.

“It was hard on everybody watching the scene unfold from about 1:00 to 3:45 p.m. when the police officer showed up,” she told WFAA while describing how she and her family watched in horror from their own front yard.

“None of us heard anything,” Blanchard added in comments to Dallas FOX affiliate KDFW. “Nobody in the neighborhood heard any gunfire whatsoever, especially four rounds. Marcus was the happiest guy. He always talked. He always hung out with us.”

Blanchard’s daughter was friends with the 13-year-old victim.

“We were really close,” Maddison Blanchard told the TV station. “She always rode the bus every morning. We would walk together. She was a really good person, and I am really shocked.”

Other neighbors noted how the Buchanans had recently moved to their street but that the two adults could often be seen sitting on their front porch.

“To say I am shocked is like an understatement,” Madison McVay told WFAA. “We saw the trampoline in the backyard, and it was triggering just knowing it will never be jumped on again, they won’t be playing in the backyard again.”

Both of the child victims were students who attended the Granbury Independent School District.

“The death of a student is one of the hardest things any school district faces. The tragic loss of two of our precious students is heartbreaking for students, teachers and staff, and our community,” Granbury ISD Dr. Jeremy Glenn said in a statement. “We appreciate the difficult work of the Granbury Police Department, and we will assist with the investigation as appropriate.”

“Who does that to a child?” Crystal Blanchard asked out loud to KDFW. “Those children were innocent. They didn’t deserve that.”