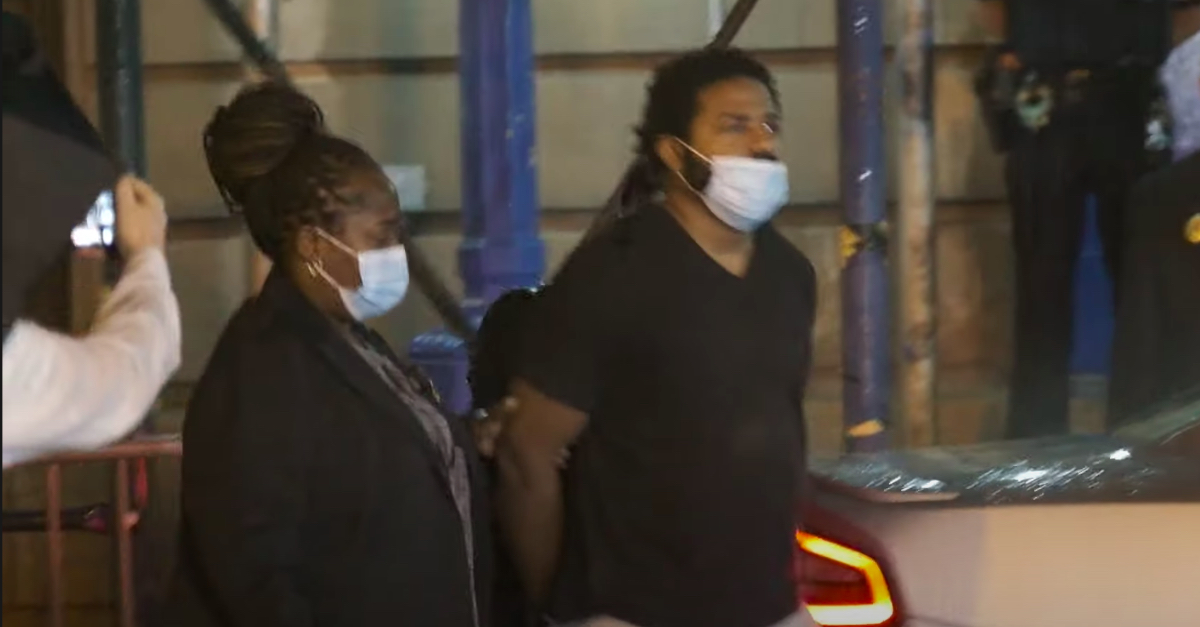 Vernon Foster being arrested by NYPD.

A New York City Man who left his three young children home alone with a family “guard dog” was arrested on Tuesday after the animal fatally attacked his 19-month-old son and viciously mauled the toddler to death, a collection of local news outlets reported.

Officers responded to a call about an animal attack Tuesday evening at a home in Flatbush, Brooklyn located on the 300 block of East 17th Street. Police said first responders found the toddler, later identified as Ryan Foster, in the lobby of the apartment building covered in blood after having suffered multiple “horrific” bite wounds to his head, neck, and shoulders, New York City NBC affiliate WNBC-TV reported. Ryan was taken to Maimonides Hospital but could not be saved and was pronounced dead.

The boy’s father, Vernon Foster, 30, had left Ryan and his two older brothers — nine-year-old Tale Foster and 11-year-old Jayden Foster — at the home of his parents (their grandparents) while he went to work at Home Depot.

Ryan’s mother, Susan Hyre, told The New York Daily News that the dog, a Rottweiler, was “vicious” and should never have been around unsupervised children.

“It’s a guard dog, not a dog meant to be around children,” a heartbroken Hyre told the outlet.

Hyre, who has custody of the children, said the boys were supposed to be visiting with their father at his apartment in Bedford-Stuyvesant, but instead Vernon left them at the home of his parents, who were out of the country for a wedding, without her knowledge. She said his alleged actions were “the ultimate betrayal.”

“You know this dog is a vicious dog and you left the kids there. That’s careless,” Hyre told the Daily News.

“This dog is a vicious dog. It’s very, very vicious, very much so. He just left the children and went to work and I’m really confused by this.”

She noted that the dog had already bitten Jayden in 2019.

“My child literally has bite marks from that dog and the marks are still there,” Hyre told the outlet. “He was bit on the leg by the same dog.”

Police said the attack happened at approximately 10:40 p.m. and that the dog, Buster, may have been set off because Ryan entered the animal’s space.

“The dog just lunged at him, he grabbed him by his collar and shirt,” Hyre said, adding that the other two children tried to come to their brother’s aid by hitting the canine.

“The kids were trying to pull the dog away,” Hyre said. “As they were fighting the dog — that’s when the dog bit him in the neck.”

When Jayden and Tale realized they could not get the animal to relent, they ran to a neighbor’s apartment who brought a shovel and the three were able to lock the dog in the bathroom, the Daily News reported.

Assistant Chief Michael Kemper, the commanding officer of Patrol Borough Brooklyn South, told the outlet that the first-responders did everything in their power to save the fatally wounded child.

“It’s horrible and you can imagine the responding officers, what they encountered,” Kemper said. “It’s a terrible situation for them and certainly for the family that’s affected by this tragedy.”

Vernon Foster was arrested on Wednesday and charged with manslaughter, criminally negligent homicide, and endangering the welfare of a child.

The dog was placed in the custody of Animal Care and Control.

Hyre told The New York Post that Ryan’s brothers were scarred by his death.

“They basically cried themselves to sleep,” she told the outlet. “Tale’ shares a room with Ryan and Jayden has his own room. Tale’ doesn’t want to sleep in the room where Ryan slept. He is literally asleep in the same bed with his brother. They don’t want to leave each other.”