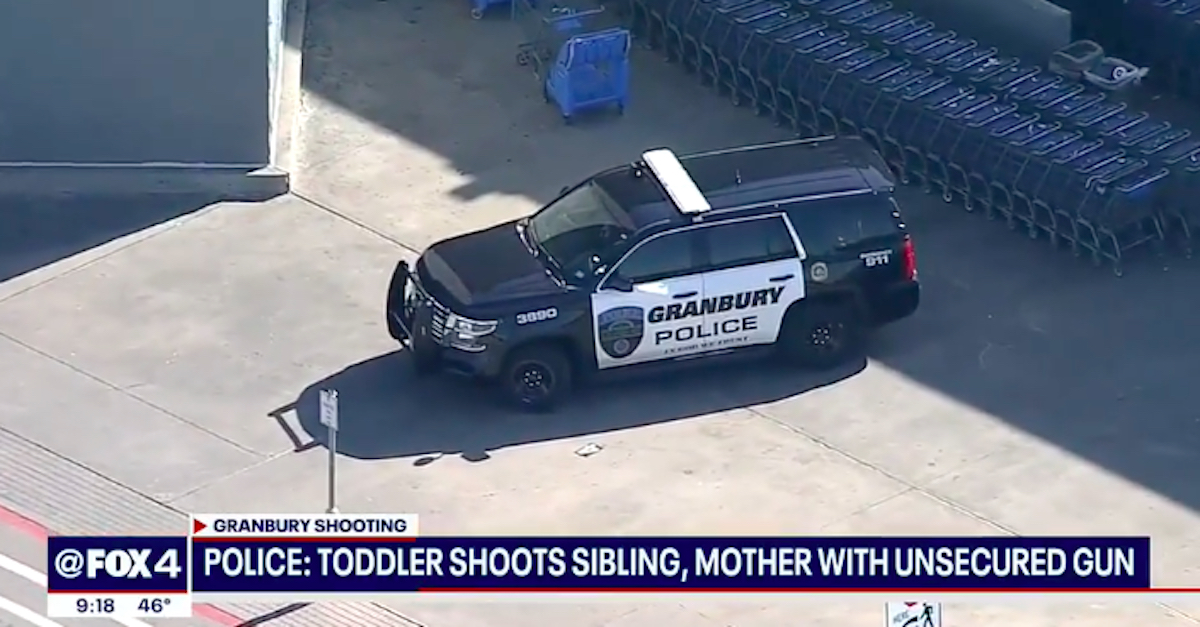 Police outside of the Granbury Walmart where a toddler accidentally shot his mother and 1-year-old sibling.

A Texas toddler on Wednesday shot his mother and younger brother after getting hold of an unsecured firearm in what police are describing as “an accidental shooting” just outside a Walmart.

According to a press release, officers with the Granbury Police Department on Jan. 5 responded to a 911 call about a shooting in a Walmart parking lot located on U.S. Highway 377, approximately an hour southwest of Fort Worth. Arriving just before 11:20 a.m., police were initially told that a 1-year-old grabbed a gun belonging to one of the parents and inadvertently shot the mother and a 3-month-old sibling. Authorities later found out that the ages were conveyed erroneously.

Upon arriving at the scene, first responders found the mother and the two young children involved in the shooting still in the parking lot. The mother, identified only as being a 23-year-old woman from Granbury, was reportedly standing outside of the family’s vehicle next to the driver’s side door. The children’s father, identified as a 26-year-old man from Granbury, was standing near the rear of the truck. The mother and one of the young children appeared to be suffering from gunshot wounds.

Investigators interviewed numerous witnesses on the scene, including the parents, and determined that the one of the children was just over 2 years old and the other was just over 1-year-old. The two year old is believed to have found a handgun in the truck that was wedged between the driver’s seat and the center console. The child grabbed the firearm and accidentally fired a single shot while all four family members were inside of the car. Police said the bullet first struck the 1-year-old, hitting the baby in the leg. Police said the bullet then traveled “through the soft tissue” of the baby’s leg before going “through the mother’s arm, and into her side in her chest area.”

The child who sustained the gunshot wound was rushed to Fort Worth Hospital by an ambulance. The child’s mother, whose injury was said to be more serious, was airlifted via helicopter to the same hospital.

Authorities said the child’s injury was not believed to be life-threatening. The mother’s injury “is potentially more serious” but her condition as of Thursday afternoon was not known, per police.

No other injuries were reported, and it was not clear if authorities were contemplating criminal charges.

The Granbury Police Department did not immediately respond to an inquiry from Law&Crime seeking additional details regarding the shooting, condition of the victims, and whether any criminal charges may be brought against the parents for allowing the child to get hold of the firearm.

Granbury Police Lt. Russell Grizzard reportedly told The Associated Press that detectives are still investigating the incident and have not yet determined if any charges will be filed.

The incident in the Walmart parking lot was the second incident involving young children accidentally shooting their mother to occur on Wednesday. Earlier in the day, a 31-year-old woman in Kansas was hospitalized after being shot in the “upper chest area” by a “small child” in her Wamego home, Topeka CBS affiliate WIBW-TV reported. She was reportedly rushed to Stormont Vail in Topeka where she was said to be in critical condition. The exact age of the child who accidentally discharged the weapon was not released.