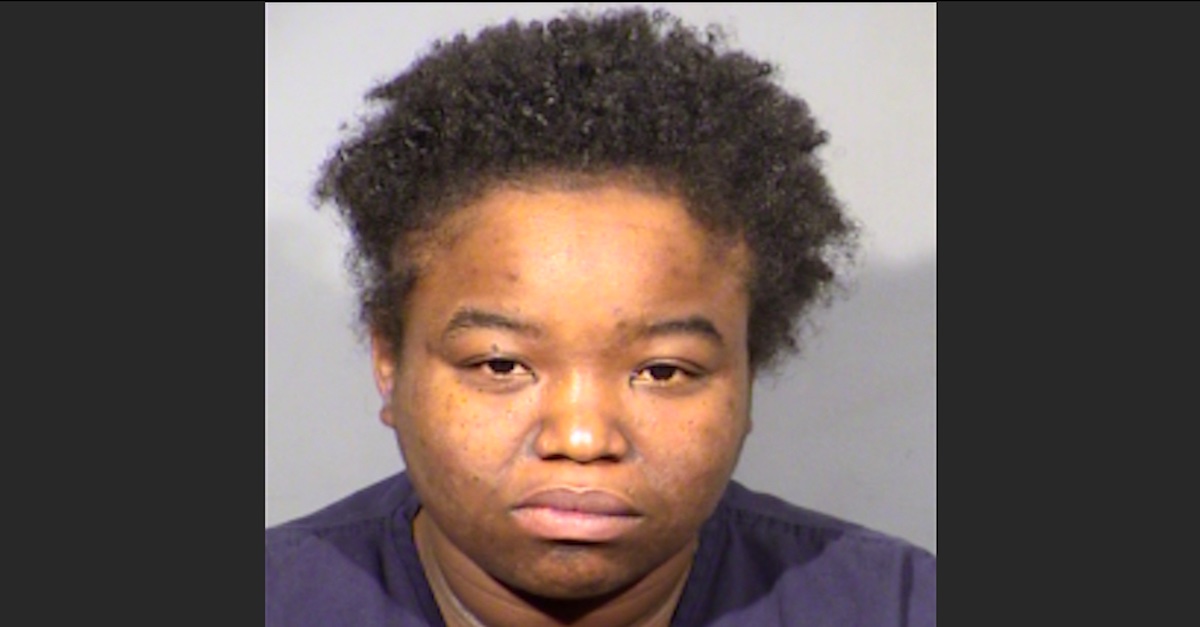 A Las Vegas mom who was allegedly filmed trying to run down a group of middle school students with her minivan last week reportedly told police that she was upset because her son was the victim of bullying. Jaquitta Madison, 36, who reportedly clipped at least four kids with her vehicle on Friday, was arrested and charged with four felony counts of battery with a deadly weapon, the Las Vegas Review-Journal reported.

According to the report, the incident took place in the parking lot next to Silvestri Junior High School at approximately 2:20 p.m. when Madison confronted the mother of another student at who had allegedly been bullying Madison’s son. As the two parents argued, cell phone video captured by bystander shows approximately 30 students gathered around to watch. The situation quickly escalated and Madison appears to get into a physical altercation with one of the students.

After reportedly accelerating forwards and backwards multiple times, Madison allegedly fled the scene with her son in the passenger seat.

Per the Review-Journal, the male student who fought with Madison told investigators that he was only trying to break up the fight between Madison and the other student’s mother when Madison allegedly punched him in the face. He reportedly claimed the subsequent fight was just him defending himself.

At least one witnesses told investigators that when Madison retreated to her car she pulled out a handgun, though the witness reportedly said she “hesitated” then put it away after several students shouted, “she’s got a gun.”

A police incident report obtained by the Review-Journal said that after Madison and her son returned to the minivan she “deliberately sped into students, some of whom jumped onto the hood to avoid being hit.”

In an interview with police, Madison allegedly admitted that she had been intentionally targeting the student who threw her to the ground.

“I’m not gonna lie, I did try to, like, hit him a little bit with my car,” Madison reportedly told investigators.

Madison is accused of striking four students with her can, though police said no one was seriously injured.

Several witnesses said Madison’s son was cheering his mother on from the passenger seat.

“The saddest part was her son was in the front seat, saying, ‘Go mom! Go get him! My mom’s going to run you over you better move,’” witness Katie Duda told the Review-Journal. “She was literally doing doughnuts trying to hit these kids.”

Officers with the Las Vegas Metropolitan Police Department reportedly conducted a stakeout outside of Madison’s home and arrested her after she was positively identified by witnesses.

Madison appeared before Justice of the Peace Ann Zimmerman on Tuesday who set her bond at $20,000. Madison posted the bond and was released with an ankle monitor and ordered to stay away from the middle school. She is next scheduled to appear in court on Dec. 11.

Watch video from the incident below.