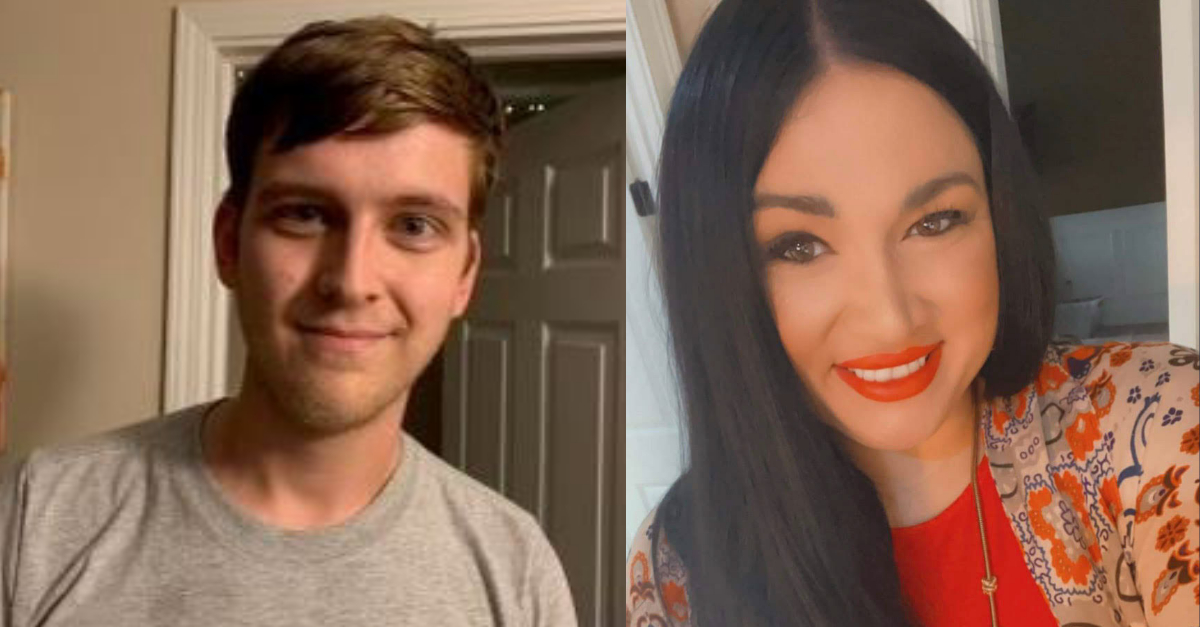 Shannon Gilday (left in photo courtesy of KSP) is behind bars after being charged with the murder of Jordan Morgan (right in photo from Facebook).

The man suspected of murdering a Kentucky lawyer while she slept in her family’s home is under arrest, according to Kentucky State Police (KSP).

Shannon Gilday, 23, was arrested without incident around 4:30 a.m. on Monday when a deputy with the Madison County Sheriff’s Office found him walking along the side of the roads according to a KSP news release.

The arrest of Gilday marks the end of a five-day manhunt for the man suspected of killing Jordan Morgan, 32, and shooting her father C. Wesley Morgan, a former Republican state lawmaker, when the two exchanged gunfire in the early morning hours of Feb. 22. Police had warned the public that Gilday should be “considered armed and dangerous.” He is now charged him with murder, burglary, criminal mischief, assault, and two counts of attempted murder.

“We are thankful the search for Gilday has come to an end, and are grateful for the public and other agencies that have remained vigilant since Gilday was named a suspect on Thursday,” said Sgt. Robert Purdy in a statement on Monday. “Their efforts ultimately resulted in his safe apprehension early this morning.” 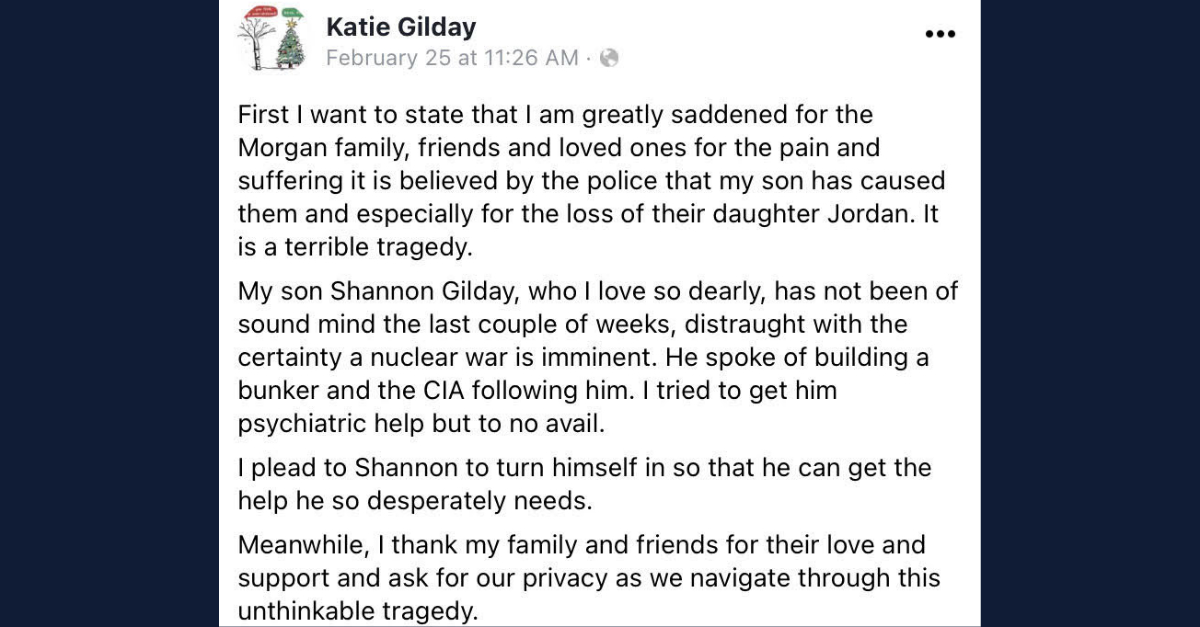 A woman that Law&Crime confirmed to be the suspect’s mother said Gilday feared a nuclear war 9post above from Facebook).

Police are still investigating but may now get a better idea about a potential motive. A Facebook post shared last week by a woman Law&Crime confirmed to be Gilday’s mother, Katie Gilday, hinted at possible mental issues.

“My son Shannon Gilday, who I love so dearly, has not been of sound mind the last couple of weeks, distraught with the certainty a nuclear war is imminent,” wrote Mrs. Gilday in her post. “He spoke of building a bunker and the CIA following him. I tried to get him psychiatric help but to no avail.”

Mr. Morgan also discussed the young man’s possible motive while speaking with the media during a candlelight vigil for her daughter in Richmond on Sunday night. In an interview with NBC Lexington affiliate WLEX, he said that Gilday wanted access to the bunker in his $6.5 million home.

“[My daughter’s] dead because of [the bunker],” said Morgan. “And it is ridiculous.”

C. Wesley Morgan spoke to the media on Sunday night at a candlelight vigil for his daughter (still above from WLEX)

Mr. Morgan listed his 14,300 square-foot home with nine bedrooms and nine-and-a-half bathrooms for $6.5 million back in August. The 200-acre property, which is being offered by Hoffman International Realty, had initially included a detailed description of the home’s bunker.  It has since been taken down by the listing agent but remains on other listing sites.

There are 4 living areas, including the main level, 2nd floor, full basement, and fallout shelter level. There are two 1,000 gallon underground propane tanks, an 8,000-gallon pressurized water tank, water well with reverse osmoses, 3 generators, Geothermal heat and air, foam insulated walls with waterproofing, and Decra roof. The Shelter is 26′ underground with a 39″ solid concrete ceiling and 15″ walls with wings. This is reported to be the most secure home on the market in this country. It is built to withstand a Seismic 12 earthquake, has 3 air filtrations from Switzerland, and 2 escape tunnels, one is approximately 100 yards long.

Law&Crime spoke with the Kentucky State Police last week who said that the bunker inside the home may have been the suspect’s motive breaking in and killing Ms. Morgan, but said nothing would be confirmed until they had interviewed Gilday. When asked how they were able to learn the identity of the suspect, KSP said that they received a “credible tip” from an individual on Tuesday night. KSP also told Law&Crime that the tip did not come from a neighbor of the victim, but rather from an individual who does not live in the area. 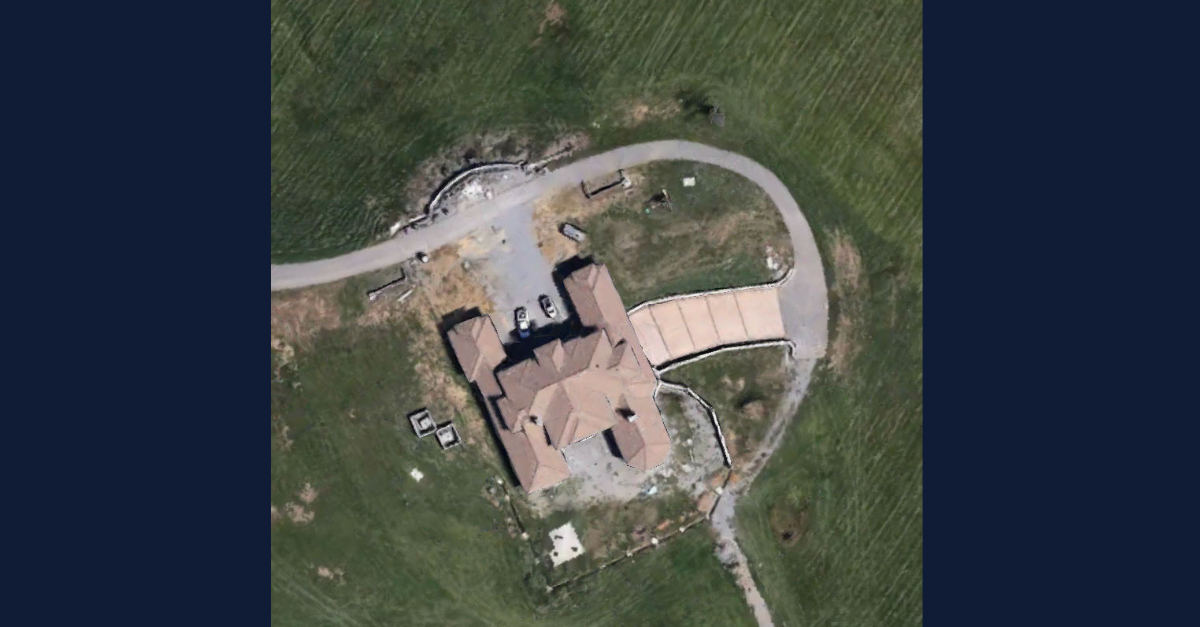 The $6.5 million property owned by the Morgans that was targeted by a gunman last week (photo above from Google Earth)

In one video posted by the Lexington Herald-Leader, Mr. Morgan told reporters: “That sorry, low-down piece of dog crap kicked her door open and shot her probably six, seven, eight times with an AR-15.”

The noise from the gunfire woke Mr. Morgan up and he opened the French Doors of his bedroom just as the suspect was descending the stairs towards the master bedroom dressed in “his little army fatigues and his flak jacket.”

Mr. Morgan said he quickly hit the floor but not fast enough. “He shot me three times,” said Mr. Morgan, who was able to make a speedy recovery following the incident. “I’ve been shot twice in the arm and once in the hip.”

At this point, Mr. Morgan said his wife was able to get to their 14-year-old daughter’s room and he then grabbed his gun and shot at the suspect 11 times. That then caused the shooter to retreat to the master bath, and Mr. Morgan said he got eight more shots off as the man fled the residence.

He told reporters that he was certain at least two bullets hit the shooter, but he said they could have been deflected by the flak jacket.

Ms. Morgan served as a summer intern to Sen. Rand Paul (R-Ky.) and later worked on the campaign of Kentucky Gov. Matt Bevin (R) according to her LinkedIn profile. She briefly served as Deputy Finance Director and Deputy Press Secretary for Gov. Bevin before taking a position as the Assistant Commonwealth’s Attorney for Kentucky’s 54th District.

At the time of her death, Ms. Morgan had just started a new position at the law firm Reminger Co., LPA.

Her involvement in politics started long before her father took office. Mr. Morgan served a single term in the Kentucky House of Representatives from 2017 through 2018, and then unsuccessfully challenged Sen. Mitch McConnell (R) for the Republican nomination in the 2020 election.

Mr. Morgan spoke about his daughter’s suspected killer on Sunday, just hours before an arrest was made.

“This is a low-life piece of dog crap that I hope I get to engage again,” said Mr. Morgan. “Because the next time it will be a totally different outcome.”