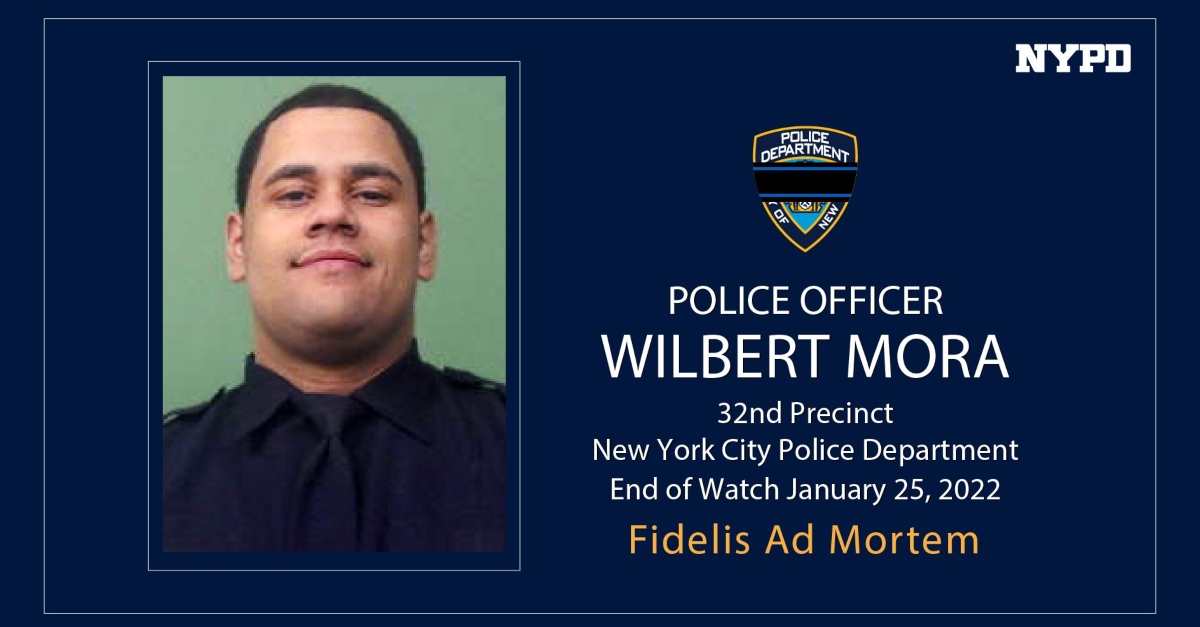 A police officer badly hurt in a double shooting has succumbed to his injuries days later, authorities announced on Tuesday. Wilbert Mora, 27, was with fellow cop Jason Rivera, 22, and another officer responding to an apartment in Harlem on Friday.

It all started late last week with a report that a woman was arguing with her son. It escalated, with that son–identified as Lashawn McNeil, 47–shooting police as they approached him while he was in the bedroom. The sole surviving officer, who had been staying back in order to be with the mother and another son, shot and killed McNeil, officers have said.

Today, we mourn the loss of Police Officer Wilbert Mora. At 27-year-old, he was murdered in the line of duty — fighting until the very end. We vow to #neverforget Wilbert and will always honor his legacy of service and ultimate sacrifice. pic.twitter.com/5nxzBNEDQD

“It’s with great sadness I announce the passing of Police Officer Wilbert Mora,” Commissioner Keechant L. Sewell said. “Wilbert is 3 times a hero. For choosing a life of service. For sacrificing his life to protect others. For giving life even in death through organ donation. Our heads are bowed & our hearts are heavy.”

Tonight, we mourn the loss of a hero officer — a son, husband, and friend. Only 22 years old, Police Officer Jason Rivera was murdered in the line of duty. We vow to #NeverForget Jason as his fellow Finest vow to honor his tremendous legacy of service & the ultimate sacrifice. pic.twitter.com/5zsx45XiM4

Police have said that the two officers were going down a narrow hallway toward the bedroom where McNeil was holed up. They say the 47-year-old man swung the door open and opened fire as they were approaching. He was armed with a Glock 45 that had a high-capacity magazine holding up to 40 additional rounds, they said. The motive behind the shooting is unclear. The mother did not mention injuries or weapons in her prior call to 911, police have said.

#Breaking Lashawn McNeil, man accused of ambushing 2 @NYPD officers with Glock 45 that was converted into ‘killing machine,’ has died at Harlem Hospital, according to two of my sources. McNeil was shot by third officer from ⁦@NYPD32Pct⁩ when he fled. pic.twitter.com/Uuj6XZB0cK

Below is a picture of the gun used to shoot our officers. pic.twitter.com/TkcMR2tr83

New York City Mayor Eric Adams, a retired police officer, ordered that flags be flown at half-staff for both Rivera and Mora.

“Wilbert Mora was a hero,” he said in the wake of the second officer’s death. “He served his city, protected his community and gave his life for our safety. Our hearts are heavy. Our city is in mourning. To his family, loved ones, and brothers and sisters in the NYPD: Your city is standing with you today and always.”