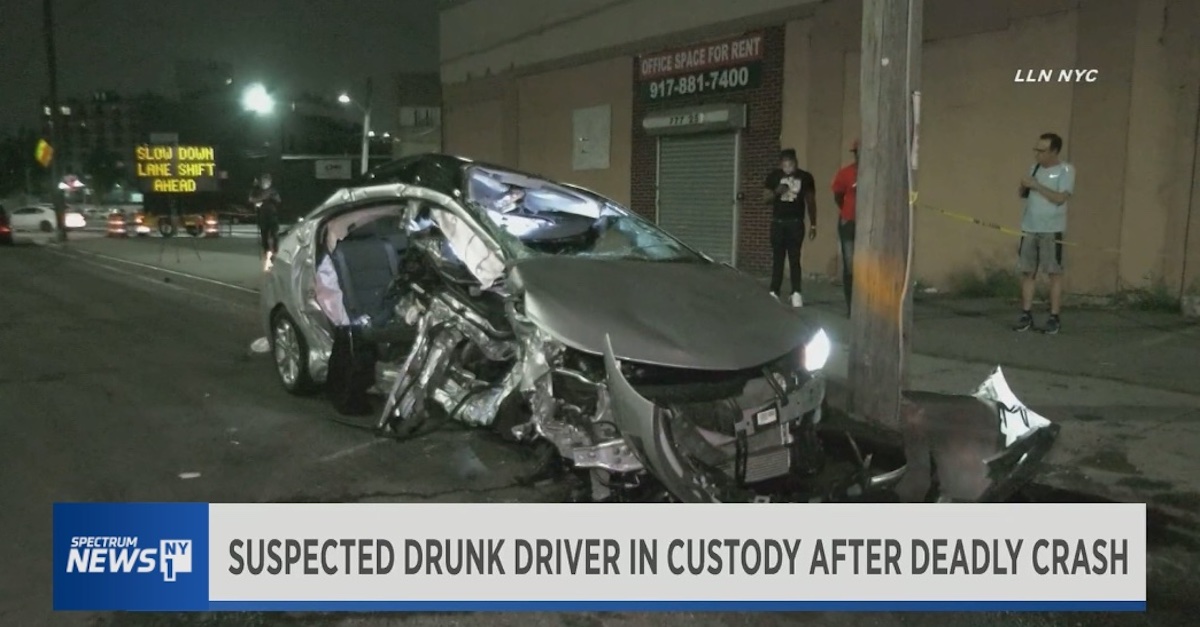 A Queens man has been charged with aggravated vehicular homicide and manslaughter after allegedly killing a mother and her daughter while driving drunk, according to New York police.

Tyrone Absolam, 42, was behind the wheel Saturday at around 8:45 p.m. when he crashed into the car being driven by Diana Granobles, 31, at an intersection near JFK airport. Granobles was making a left turn when Absolam hit her car. Granobles and her daughter, Isabella, 10, were taken to a local hospital where they were both pronounced dead from their injuries, according to a press release from Queens District Attorney Melinda Katz.

Police officers responding to the incident “observed the defendant to have bloodshot watery eyes and to be in an intoxicated condition,” the press release said. “According to the charges, the officers administered two standardized field sobriety tests to the defendant,” both of which he failed.

“At the time of arrest, according to the charges, the defendant admitted to officers, in sum and substance, I drank from my girlfriend’s cup of vodka and iced tea at around 5:00 p.m. while we were at the beach, I was driving the grey Nissan that got into the accident, I just got it,” the DA’s press release said. “It’s new car, there are no issues with it. I was driving 50 miles per hour.”

“As alleged, the defendant’s selfish, illegal choices resulted in the tragic death of a 10-year-old girl and her mother and caused injuries to himself and his passengers,” the DA’s office said. “The rules of the road are not suggestions. They exist to keep motor vehicles from becoming deadly objects of destruction. When they are ignored, the results can be catastrophic. The defendant allegedly got behind the wheel of his vehicle while under the influence of alcohol and then proceeded to drive recklessly.”

The posted speed limit where the crash occurred is 35 miles per hour, the DA’s office said.

Absolam’s girlfriend, 38, and two children ages 12 and 16, who were passengers in Absolam’s car, were also seriously injured in the crash, according to a local WNBC report.

If convicted, Absolam faces up to 25 years in prison.

A GoFundMe campaign has been started to help cover the funeral costs of the victims.

“I have created this fund in honor of my 10 year old cousin, Isabella and her mother, Diana (age 31) who were tragically taken away from us in a car accident as it was a drunk driver who hit them,” Kassandra Granobles wrote. “This family is the epitome of the ‘American Dream’ as they worked their tails off to do right by their 3 children. I’m just here asking for your generosity to help cover my family in funeral arrangements. Anything helps, even if its to share this with someone you may know.”

The campaign has raised more than $8,300 as of Monday morning.

The Queens collision was one of three fatal crashes in New York over the weekend, all of them allegedly involving drunk drivers.

In the Hamptons, an Uber driver and three of his passengers, including two brothers, ages 20 and 25, were killed when a speeding driver crossed the dividing line Sunday and hit them head-on, according to a New York Times report. The crash also left a woman critically injured.

In Harlem on Saturday, a motorcyclist was struck and killed by a driver who police said had too much to drink, according to the Times report.