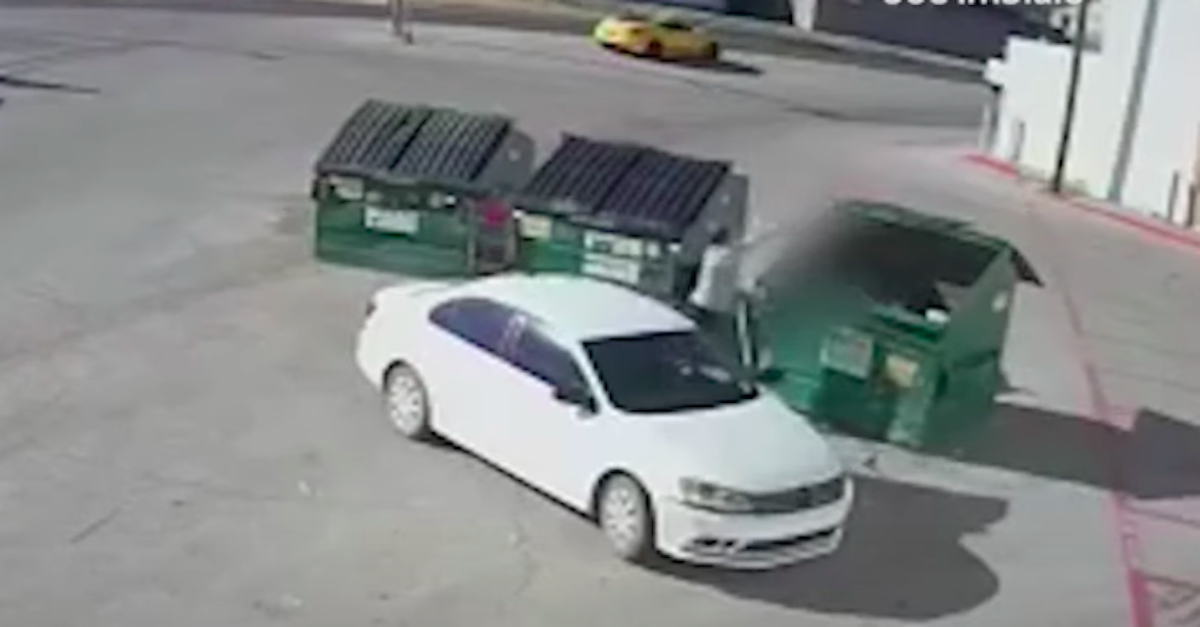 Alexis Avila allegedly throwing her newborn baby in a dumpster.

An 18-year-old woman in New Mexico is facing a pair of felony charges after she was allegedly caught on a surveillance camera tossing her newborn baby in a parking lot dumpster. Alexis Avila was taken into custody and charged with one count of first-degree attempted murder and one count of first-degree child abuse after admitting that she was the person shown in the footage throwing the baby into the trash, police said.

According to a press release from the Hobbs Police Department (HPD), officers on Jan. 7 responded to a 911 call about a baby being found in a dumpster located in the 1400 block of N. Thorp behind a Rig Outfitters and Home Store near the state’s eastern border with Texas. Upon arriving at the scene at approximately 8 p.m., first responders reportedly discovered the child and immediately rendered first-aid until Emergency Medical Services personnel got to the scene. EMS continued rendering aid before rushing the child to a local hospital for treatment. Shortly after arriving at the facility, the newborn was transported to Lubbock Hospital in Texas for more specialized pediatric treatment.

Police said that the child was in stable condition as of Sunday afternoon.

The department said that investigators obtained surveillance footage from the surrounding businesses, which they used to identify the vehicle driven by the person who disposed of the infant.

Albuquerque ABC affiliate KOAT-TV obtained a copy of footage which shows a white four-door sedan pulling into a nearly empty parking lot and stopping the vehicle in front of a line of three large green dumpsters at approximately 2 p.m. A woman exits the driver’s side door and opens the back passenger door. She appears to grab a black bag from the backseat and throws it into the open dumpster farthest to the right. She then gets back in the car drives off. The entire incident takes less than 30 seconds.

Footage from the same camera at 7:42 that evening appears to show a dark colored SUV parked in the lot and three people going through the dumpster. One of the three grabs the black bag out of the dumpster. The person then appears to pull a baby from the bag and walks away from the dumpsters. Less than ten minutes later, police and ambulance can be seen on the scene.

Joe Imbriale, the owner of Rig Outfitters, provided the surveillance footage to police and KOAT.

“You know, luckily we had dumpster divers back there, and they pulled [the bag] out and they didn’t even know what was in the bag,” Imbriale told KOAT.

After tracking the vehicle back to Avila, the teen “confessed to giving birth to the child at another location and then placing the baby in the dumpster,” police said.

Avila is currently scheduled to appear before a judge in Lea County District Court for her arraignment on Monday.