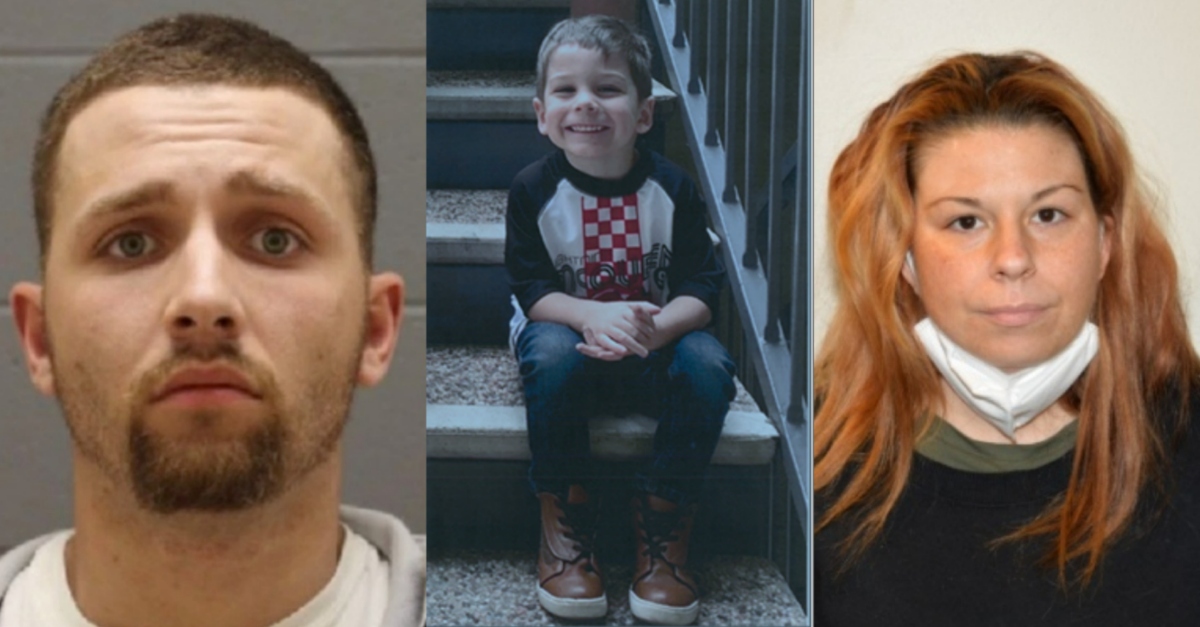 A New Hampshire man is set to spend up to 45 years in prison for manslaughter and other charges for killing his girlfriend’s 5-year-old son.

“We can’t forget this little guy right here and the way he was meant to live his life,” judge said after holding up a picture of Elijah.

“I never meant, never wanted any of this to happen to Elijah…I loved that boy, I did…I’m so sorry. I wish I could take it back.” Boyfriend of Elijah Lewis’ mom, Joe Stapf, who just entered guilty plea in the boy’s death. #wbz pic.twitter.com/Ln5TMGiyY9

New Hampshire authorities started searching for Lewis in October 2021 after learning no one had seen him in quite some time. Investigators tracked down Danielle Dauphinais and Stapf to the New York City borough of the Bronx on Oct. 17.

Lewis was found dead just six days later in a state park in Abington, Massachusetts. In texts to a friend, Dauphinais had allegedly expressed frustration about the young child’s behavior. She said his father took him at age one and only returned him in May 2020.

“I call him the next Ted Bundy and Jeffrey Dahmer,” she told friend Erika Wolfe of Lewis in a text message, according to a report in the Boston Globe.

That’s not how loved ones depicted Elijah in court on Thursday.

Relatives of 5-y-o Elijah Lewis in front row with #ElijahLewisStrong signs, as boyfriend of Merrimack, NH boy whose body was discovered in Abington, MA last year, is now pleading guilty to manslaughter & other charges. “We want to be Elijah’s voice.”#wbz pic.twitter.com/aZDCZtcPC3

“He obviously had a zest for life,” the judge said.

He called the child’s death torture. The first-degree murder case against Dauphinais is ongoing.

Prosecutors read texts showing Dauphinais and Stapf talking about abusing Lewis and not feeding him, according to WMUR. For example, Stapf reportedly told Dauphinais they had to feed the child and allow him to sleep so he would look better and they could take him out. Dauphinais said she did not want to do that, prosecutors said. According to authorities, Stapf once threw the boy on a bed, causing him to hit his head, but he started pleading with Dauphinais to stop what he called “torture.” Again, she allegedly refused.

Stapf finally found Lewis naked and bleeding from the head in a bathtub. He failed to get medical help, however, authorities said. Lewis died some time between sept. 21 and Sept. 24, 2021. Dauphinais recruited Stapf to help get rid of the body. They drove a pickup truck to Abington, where they buried Lewis in a shallow grave, prosecutors said.

“You are less than human,” Elijah’s father Timothy Lewis reportedly said in a victim impact statement delivered in a call from Arizona. “You could have stepped up to stop this at any point if you had been man enough. You could have brought him back to us at any point.”

Stapf pleaded guilty to manslaughter, second-degree assault, falsifying physical evidence, and tampering with a witness. He was sentenced to spend 22 to 45 years behind bars.