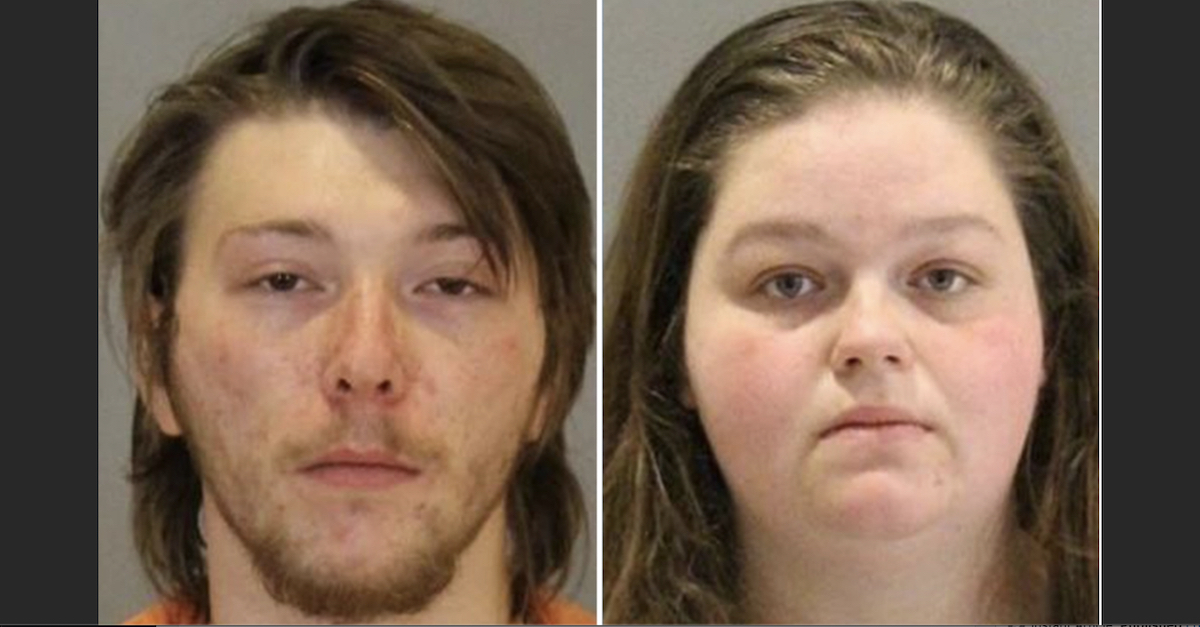 A 23-year-old father in Nebraska and his 24-year-old wife were arrested after police say the man threw his 8-month-old daughter against a wall and fractured her skull as the child’s mother watched and did nothing for several days. Theodor Hurt and Dakota Vick were taken into custody and charged with one count each of felony child abuse, the Omaha World-Herald reported.

According to the report, Hurt and Vick on Nov. 22, 2021 brought their daughter to the Children’s Hospital and Medical Center in Omaha because the little girl’s head was abnormally swollen. Medical personnel performed a CAT scan which reportedly showed that the infant had sustained “a skull fracture and significant swelling on the right side of her head,” Omaha ABC affiliate KETV reported.

Making the prognosis even more dire, the child’s fractured skull was “causing the malformation of her head,” a probable cause affidavit filed by the Omaha Police Department reportedly said.

The couple reportedly told the hospital staff that their daughter was injured after she had fallen off of the couch at their home two times in the days prior.

Due to the suspicious nature of the infant’s injuries, hospital personnel notified police. Officers responded to the scene and interviewed Hurt and Vick who said that their daughter on Nov. 19 had rolled herself off of their couch at approximately 4:15 p.m. and then again at approximately 6 p.m., per the World-Herald.

Vick reportedly explained that earlier in the day Hurt’s mother had brought their two older children to their home after picking them up from school. Hurt’s mother reportedly told investigators that she was at the home when the infant girl fell off of the couch during a diaper change. That story, along with most of what Hurt and Vick told doctors and police, was allegedly false.

Investigators interviewed Hurt and Vick for a second time on Nov. 23. During the interview, Hurt allegedly said that on Nov. 18 he was at their home watching their daughter and their four other kids, ages two, four, six, and eight. The infant had reportedly taken a late nap and was staying awake longer than usual and acting “fussy.” Hurt allegedly said that he grew increasingly frustrated with the infant’s crying “while he was trying to play video games and drink shots with his virtual friends online,” KETV reported.

Already under the influence of multiple shots of alcohol, a frustrated Hurt allegedly brought the infant upstairs and “threw” her into a Pack-n-Play travel crib with so much force that the little girl’s head slammed into the wall.

Per the affidavit, Hurt told investigators that his daughter started crying after being thrown into the wall. The suspect then reportedly sat down on the bed and started to cry.

During Vick’s second interview, she reportedly told police that she “saw Hurt throw the baby and was upset at how he handled the girl, but didn’t see the girl strike the wall,” per the World-Herald.

In addition to the child abuse charge, Hurt is also facing one count of misdemeanor caretaker neglect. The latter allegation stems from Hurt allegedly hitting their oldest child in the head multiple times, leaving visible bruises and forcing her to stay home from school for over a week.

Hurt has pleaded not guilty to the charges. As of Sunday evening, Vick had not yet entered a plea.

All five of Hurt and Vick’s children were removed from the home and are currently in the custody of Child Protective Services.