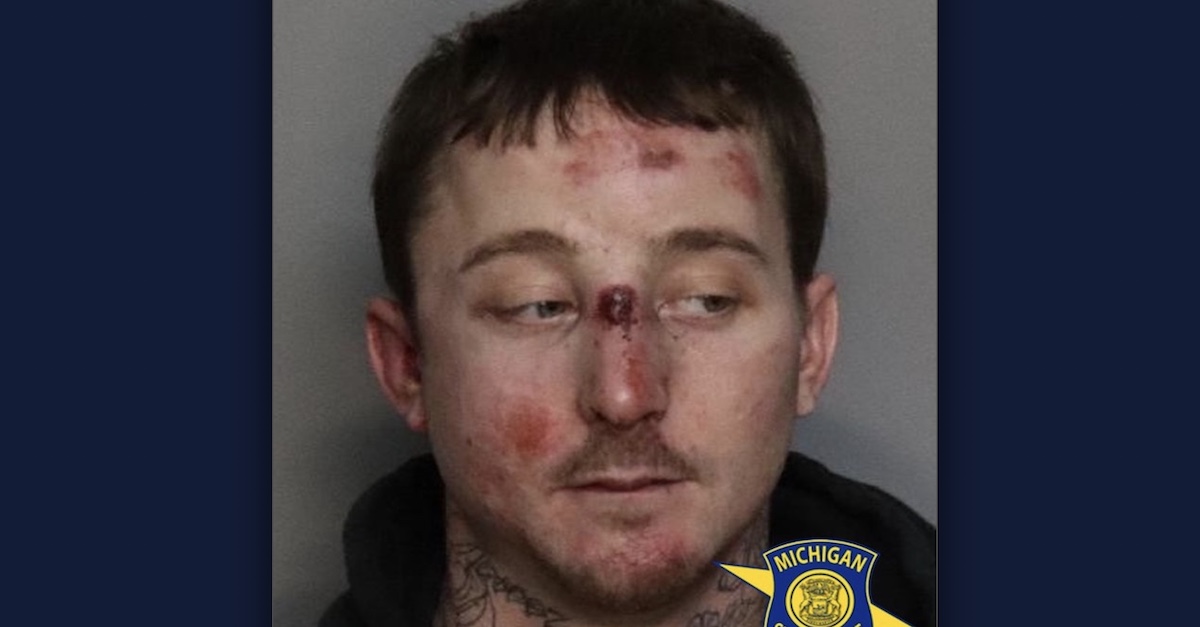 A 31-year-old Michigan man is behind bars this week for allegedly beating a 2-year-old girl to death, then leaving the infant at a local hospital and fleeing the scene. Aaron Joseph Trout was taken into custody on Friday and charged with one count of felony murder in connection with the baby’s death, police say.

According to a press release from the Michigan State Police (MSP), troopers on Friday morning were dispatched to the MyMichigan Medical Center Alpena in the 1500 block of West Chisholm Street regarding a deceased 2-year-old child. The request for MSP assistance in the investigation came from officers with the Alpena Police Department after a woman arrived at the hospital seeking medical attention for the child.

Soon after authorities identified the baby’s residence in Alcona County, investigators with the MSP Alpena Post were able to identify Trout as a suspect in her death, police said. Following a “coordinated effort” by local, state, and federal law enforcement agencies, Trout was taken into custody in Alcona County and later booked in the Iosco County Jail.

According to a report from The Alpena News, the arrival of the woman and the deceased child, both of whom were not identified, caused the hospital to go into a temporary lockdown, allowing only patients with standing appointments and hospital employees displaying identification badges to enter the facility. MSP did not specify the reason for the lockdown, but reportedly released a statement clarifying that “at no time was there an active shooter in the hospital.” The lockdown reportedly lasted from approximately 10 a.m. until approximately 1 p.m. on Friday afternoon.

Alcona County Prosecutor Tom Weichel reportedly told Alpena News that investigators believe Trout dropped off the unidentified woman and the child at the hospital, then left the area. The prosecutor reportedly did not know the nature of the relationship between Trout and the woman or the woman and the deceased child, but he did confirm that the baby was not Trout’s daughter.

Weichel reportedly told the newspaper that investigators currently believe the child sustained the fatal injuries several days prior before being brought to the hospital, but are awaiting the results of an autopsy to determine the exact cause of death.

Trout on Monday appeared in the 81st District Court in Alcona County for his arraignment where County Judge Laura A. Frawley. During the Monday morning proceedings, Trout appeared virtually and repeatedly told Judge Frawley that he needed to be released from jail because he had recently obtained a new job which he was slated to begin on Wednesday, Alpena News reported.

Judge Frawley was reportedly not sympathetic to the accused killer’s request. She reportedly emphasized Trout’s previous history of criminal assault, resisting police, failing to appear in court, and history of substance abuse in denying his request for bond. Frawley also reportedly prohibited Trout from using accessing the internet or having any contact with the victim’s family while in jail. He may make phone calls, but only after requesting permission from the court.

Alpena News further reported that Trout was charged with one count of first-degree murder committed in the perpetration or attempt to perpetrate first-degree child abuse. The Alcona County Prosecutor’s Office and the Iosco County Sheriff’s Office did not immediately respond to messages from Law&Crime seeking clarification on the charges Trout faces.