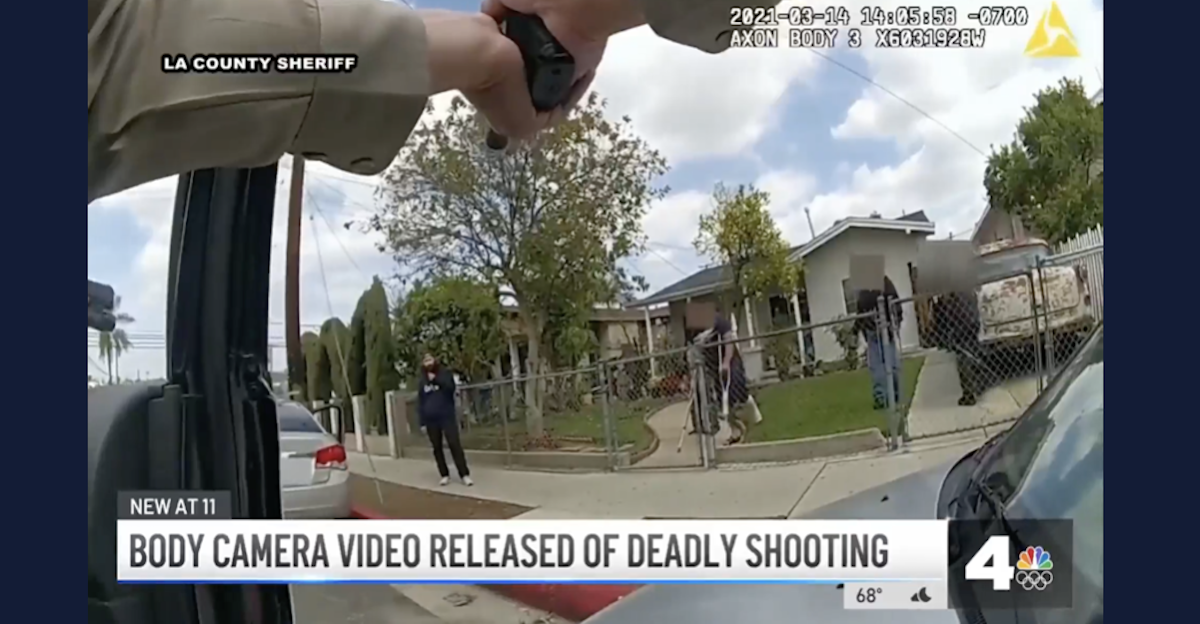 A Los Angeles County sheriff’s deputy has been charged with two felonies for shooting a man last year after he’d already been shot to the ground and was no longer armed.

Deputy Remin Pineda, whose 38th birthday is today, is to be arraigned later on one count of assault with a semiautomatic firearm and assault under color of authority, according to the the Los Angeles County District Attorney’s Office.

He’s accused of needlessly shooting David Ordaz Jr., 34, after Ordaz had fallen to the ground after being shot by deputies outside a home in east Los Angeles on March 14, 2021. They’d gone there after Ordaz’s sister called authorities to say her brother was suicidal and armed with a knife.

Deputies spoke with Ordaz outside the home, and two fired beanbag rounds at him as he stepped toward them with a knife. He then ran toward them and was shot by deputies multiple times.

At that point, Ordaz had fallen to the ground and dropped the knife, laying with his back facing deputies. But body camera footage release by the sheriff’s department shows a deputy, apparently Pineda, continue to fire on Ordaz as he’s on the ground. That’s what led to the criminal charges filed Wednesday, District Attorney George Gascón announced today.

“Unlawful and excessive force at the hands of police erodes the public trust and leads to further divisions between law enforcement and the communities they serve,” Gascón said in a press release. “It is imperative that we hold law enforcement accountable when they act unlawfully. This tragic killing of Mr. Ordaz in the presence of his own family has caused tremendous harm that will reverberate for years to come.”

Sheriff Alex Villanueva questioned the lawfulness of the shooting when he released video footage of it last summer.

“I want to clearly state I have grave concerns regarding this deputy involved shooting. One of the deputies has been relieved of duty and their peace officer powers have been suspended, pending the outcome of this investigation,” according to the July 30, 2021, statement.

That deputy was Pineda, and the sheriff’s department said today he “will continue to be relieved of his peace officer powers pending he outcome of the court proceedings.”

“The Sheriff remains committed to promoting actions by employees demonstrating a reverence for life, while providing for the safety of the communities we serve,” according to the statement. “Our condolences to Mr. Ordaz’s family for their loss.”

Ordaz’s family called the announce “a huge win” in a post on the Instagram page @justicefordavidordazjr. They are suing the deputies and the sheriff’s department in U.S. District Court. The case is being mediated by retired U.S. District Judge Andrew J. Guilford, according to minutes from a recent status conference.

A post shared by Say Their Names LA (@saytheirnamesla)