An Asian woman is suing her white neighbor over racist harassment caught on video. Plaintiff Thi Boa Tran Pham, who is Vietnamese, says that Jan Myers, 72, is the neighbor who was recorded making racist insults in Shoreline, Washington.

In one incident, the older woman is naked from the waist down in censored footage. The woman in the video above flipped the bird. She had allegedly exposed herself not only to Pham but to Pham’s 2-year-old son.

“Without provocation, Defendant Myers has on multiple occasions including, but not limited to: on April 5th, 2021 sought Plaintiff Thi Boa Tran Pham out without invitation and made racially derogatory and threatening statements to her, including threats against her life,” said the complaint obtained by Law&Crime.

As clear from footage, the perpetrator subjected Pham to taunting and threats.

“Hey, Miss Vietnam,” said the woman identified as Myers, sitting in a vehicle. “You’re not going to live very long.”

The lawsuit describes this harassment as part of a pattern. From the complaint:

“Come on out, slant eye,” the woman said in another video. “I’m calling the cops on you, you little slant eye.”

Pham wants at least $100,000 in damages and a permanent protective order of 300 feet. The plaintiff’s and Myers’ homes are 60-feet apart, according to the complaint. She announced the lawsuit on Tuesday with her attorney Jeff Campiche, and her husband Bill Healy, who is white.

Myers was arrested for a hate crime and released on her own recognizance. The case is pending. Myers had claimed the neighbors’ cat pooped on her lawn, according to The Seattle Times. She allegedly denied to cops that she threatened Pham or called her “Miss Vietnam,” but police called B.S., citing the video footage. 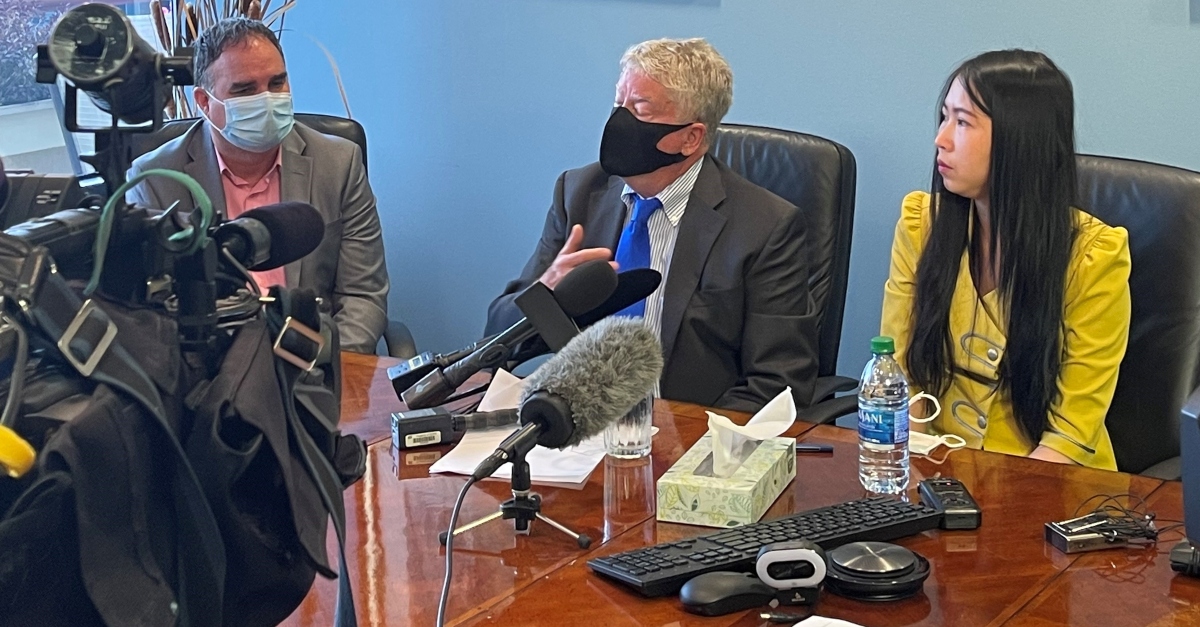 Myers’s attorney Jim Johansen, who represents her in the criminal matter, told Law&Crime that his client has not been served the lawsuit, so he could not comment on it. He asserted those videos were taken out of context, but he said he was not at liberty to discuss the theory of the case. He acknowledged it was his client in the footage and said it was not in dispute.

“The video speaks for itself,” he said.

Beyond that, however, Johansen did dispute the reported allegation that Myers violated a protective order. Noting that there were two orders–a criminal one and a civil one–Johansen said his client had not violated those and police had not arrested her on such a claim.