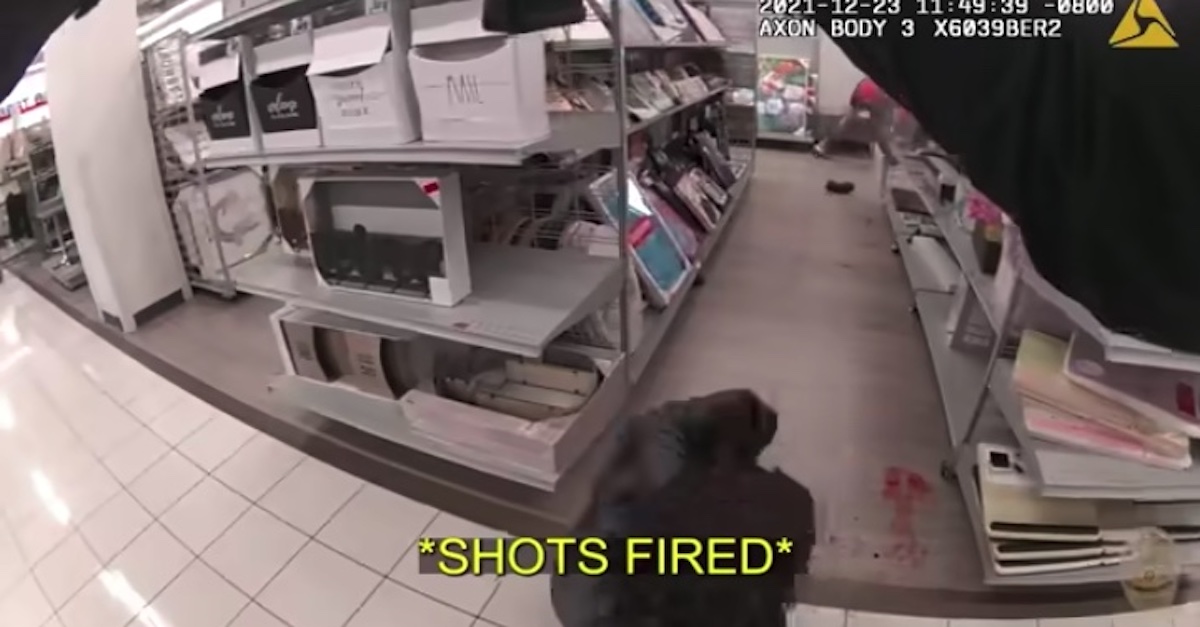 Los Angeles police have released body camera footage of the shooting that left a 14-year-old girl dead in a dressing room at a Burlington store in North Hollywood last week.

Valentina Orellana-Peralta, 14, was reportedly trying on dresses with her mother on Thursday when police opened fire on an assault suspect who had been using a bike lock to attack a woman in the store.

“Preliminarily, it is believed the victim was struck by a round which skipped off the floor and entered the dressing room wall,” the LAPD said Monday.

The LAPD released a video compilation of 911 calls, surveillance video, and body-worn camera video that show the events leading up to the shooting.

The body-worn camera video shows the police shooting of Elena-Lopez from multiple angles. One angle appears to show an officer shooting at Elena-Lopez while the assault victim is at the officer’s feet.

Three shots are heard, and Elena-Lopez is seen falling to the ground. The officers approach, ordering him to roll over on to his stomach.

Almost immediately after the shots are fired, screams can be heard in the background. This is presumably Orellana-Peralta’s mother, who was in the dressing room with her when she was killed.

The body-worn cameras do not show what happened when police went to investigate the source of the screams.

“During a search for additional suspects and victims, officers found the girl and discovered she had been struck by gunfire,” police said in a press release accompanying the video. “She was pronounced dead at the scene. At this preliminary phase of the investigation, it is believed that victim was struck by one of the rounds fired by an officer at the suspect.”

The LAPD said it released the video compilation in an effort to be transparent.

The California Attorney General’s Office will investigate and will “independently review the officer-involved-shooting,” the police press release said.

The California Department of Justice is also investigating.

“Once the investigation has been completed, it will be turned over to the California Department of Justice’s Special Prosecutions Section within the Criminal Law Division for independent review,” the California DOJ said in a press release.

The assault victim was taken to the hospital for injuries. As of Monday, police said the victim’s condition was “unknown at this time.”

Prior to the shooting, surveillance video shows Elena-Lopez entering the Burlington store at the street level. He has a bicycle with him. He is seen taking the escalator up to the second level of the store. He leaves his bike at the entrance to the down escalator; several people walk by, coming both up and down the escalator.

Twice, Elena-Lopez picks up the bike over his head and appears to be preparing to either drop or throw it down toward the entrance. He doesn’t actually do this.

Elena-Lopez is seen striking a woman on the leg with his hand, and swinging what is apparently a bike lock around him. He then takes the escalator down to the first floor, where he takes his pants off and appears to assault someone who walks by him.

The compilation also includes 911 calls from frantic people inside the store.

“I have a hostile customer in my store attacking customers!” one caller said. “He’s breaking things,” the caller adds, as crashing sounds are heard in the background. The caller can be heard throughout the call yelling at customers to evacuate the store.

Elena-Lopez wasn’t armed with anything other than the bike lock, but at least one person who called 911 thought he was armed.

“Can you send a unit to Burlington in North Hollywood?” one 911 caller said. “There’s a guy with a gun.”

When asked about the suspect’s race, the caller said they didn’t know.

Prominent civil rights attorney Ben Crump announced Monday that he is representing Orellana-Peralta’s family. They are expected to speak at a press conference Tuesday.

MEDIA ALERT: On Thursday, 14yo Valentina Orellana-Peralta was killed by an LAPD officer’s stray bullet while trying on clothes. @AttorneyCrump and co-counsel Rahul Ravipudi to hold a news conference on 12/28 at 10:30 a.m. PT in Los Angeles. pic.twitter.com/KNc760X0US

Valentina had come to the U.S. with her mother, Soledad Peralta, about six months ago, the Los Angeles Times reported. They had come to visit Valentina’s older sister, who worked in a restaurant, and they were working on documentation to stay in the country permanently, the report said.

“Valentina was a shy girl in Chile, but everything was turning out well for her in the U.S.,” her aunt Carolina Peralta, 51, told the LA Times. “She was catching up with English and being more outgoing. She was happy to be with her older sister.”

“Valentina died in the arms of her mother, inside the dressing room,” her aunt also said, according to the LA Times. “My sister does not understand how this tragedy could have happened just when they had managed to reunite the family.”

You can watch the video, which is graphic and contains strong language, here.