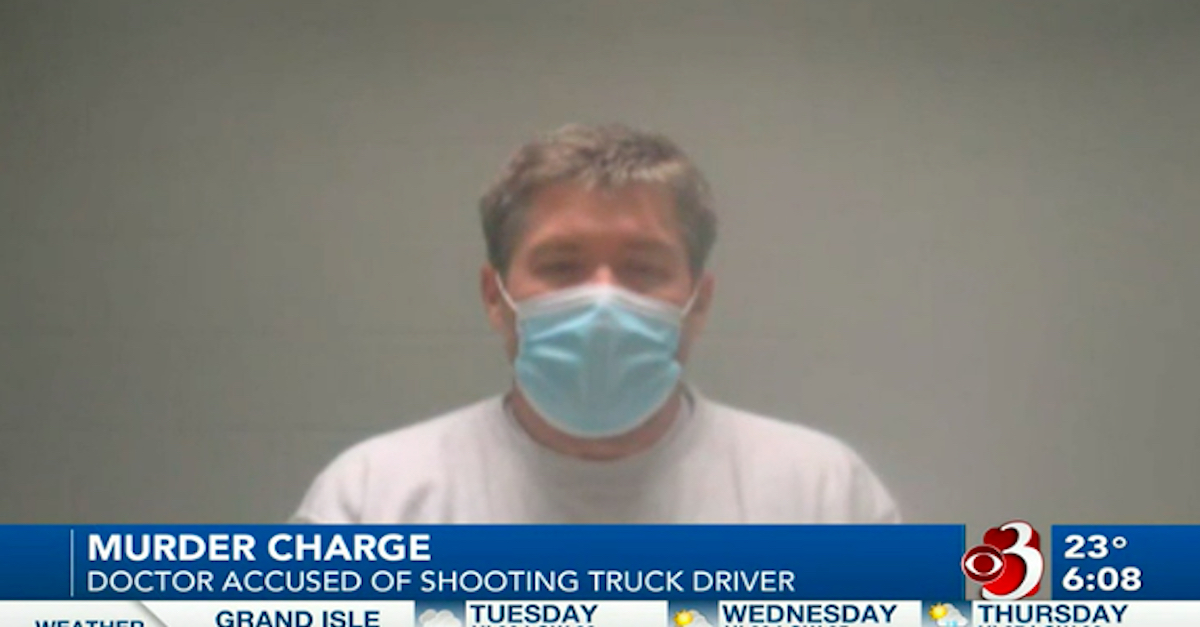 A Florida doctor accused of fatally shooting a delivery truck driver in Vermont in an apparent road rage incident more than two years ago has formally pleaded not guilty to murder charges in the Green Mountain state. Appearing virtually in Vermont’s Windham County Superior Court on Monday, 49-year-old Jozsef Piri, of Naples, entered a plea of not guilty to one count of second-degree murder, Burlington CBS affiliate WCAX-TV reported.

Piri was arrested by authorities in Florida earlier this month in connection with the November 2019 shooting death of 44-year-old Boston native Roberto Fonseca-Rivera.

According to the report, Fonseca-Rivera was found dead behind the wheel of his delivery truck while between stops to local restaurants on Route 103 on Nov. 1, 2019. A colleague requested a welfare check on Fonseca-Rivera’s vehicle after reportedly looking at his truck’s GPS tracker and noticing that his vehicle had been stationary for an extended period of time. Upon arriving at the scene, first responders found Fonseca-Rivera dead from a gunshot wound to the chin.

Per Boston NBC affiliate WBTS-TV, investigators said the bullet appeared to have been fired from in front of the truck with the bullet traveling through the windshield before it struck Fonseca-Rivera in a manner consistent with the shooter being in another vehicle.

A police affidavit obtained by the Tampa Bay Times reportedly said that Piri was driving on Route 103 on his way back to his home in Connecticut and his vehicle was directly in front of Fonseca-Rivera’s at the time of the shooting. Investigators reportedly said they were able to place Piri’s Toyota Tundra in that location based on surveillance camera footage, GPS data, license plate data, photographs, and other information.

Investigators with the Vermont State Police obtained and executed search warrants on Piri’s homes in Vermont and Connecticut—where he maintained his medical practice prior to moving to Florida. CT Insider reported that those searches led to investigators seizing a 9mm handgun—the same caliber used to shoot Fonseca-Rivera. However, the firearm’s barrel and slide, which are required to perform a proper ballistic analysis, were reportedly missing.

Additionally, Piri reportedly told investigators that he had grown increasingly frustrated in the hours leading up to the shooting, beginning with maintenance work on his Vermont home going over budget and causing him to run late for a show at Foxwoods later that evening, CT Insider reported.

As he was driving back to Connecticut, Piri reportedly got stuck in traffic before getting lost. He then said he tried to get his car washed but the machine at the car wash could not read his credit card.

He reportedly described the experience to investigators as a “shit day that he was having,” per the affidavit.

Piri was taken into custody by deputies with the Collier County Sheriff’s Department in Naples, Florida on Dec. 16 and extradited back to Vermont last week.

During Monday’s proceedings, Piri’s attorney, Adam Hescock, said that he had reached an agreement with prosecutors to set Piri’s bond at $250,000, provided that Piri turn over his extensive collection of firearms and surrender his passport. He will also be forced to abide by a curfew at his Florida home.

Hescock did not immediately respond to a request for comment from Law&Crime.