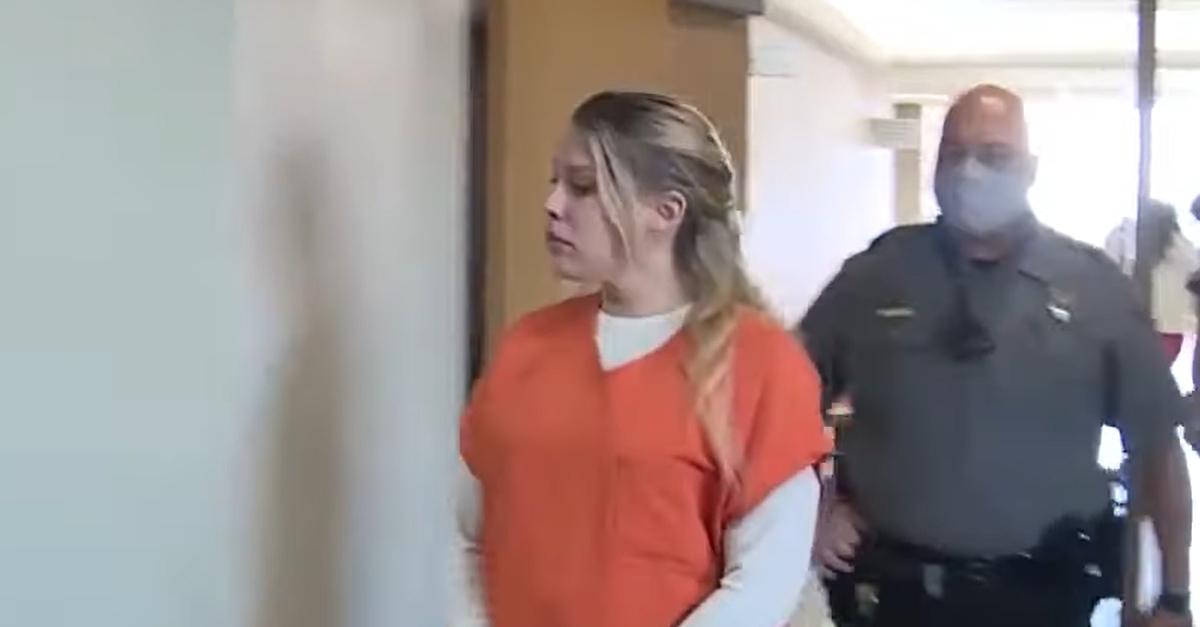 When it is all said and done, Rebecca Latane Hogue, 30, has a chance at a new life. A judge sentenced the Oklahoma mother on Friday to just 16 months in prison, with the rest suspended. This is contrary to the jury’s recommendation that she spend the rest of her days behind bars for enabling her boyfriend Christopher Trent, who fatally beat her son Jeremiah “Ryder” Johnson Jr., 2, according to KOCO. She is getting credit for three months time served. The defense said she was a victim like her son, and that jurors only had a choice between recommending life or life without parole. Prosecutors had maintained she either knew or should have known Trent was abusing the child in the time before the boy died.

The defense isn’t budging on the question of Hogue’s culpability. She is innocent and a victim like Johnson, they said in a sentencing memorandum dated Jan. 28. They argued that the official investigation was incomplete and flawed. The defense called Trent’s actions sociopathic and unpredictable, and that he successfully covered up the abuse to Hogue. The fact that the coverup worked is not indicative of Hogue’s guilt, they said.

Hogue woke up Jan. 1, 2020 to find her son not breathing, according to the version of events reported by KOCO. The 2-year-old had sustained bruises and injuries to his face, head and back. Investigators discovered a large hole in the master bedroom featuring what seemed to be the toddler’s hair. Cops searched for Trent, but he died, apparently by suicide at Wichita Wildlife Mountain Refuge. Words carved into the tree near his body, according to the BBC: “Rebecca is innocent.”

This is the case of mom charged after her boyfriend killed her 2 year old son
Jeremiah “Ryder” Johnson while she was at work.
Prosecutors say Hogue was aware of previous abuse to her son. Her boyfriend, Christopher Trent, took his own life days after the murder. https://t.co/t4DWuYG5Cz

“Years is not a proportional punishment, months is more just. Each month is going to be represenative of a year that you would have been legally responsible for Ryder.”

The defense sought probation after her conviction, suggesting that prosecutors hustled jurors.

“Let’s be clear, this trial ultimately became an eight day journey into the prosecutor’s judgment of Rebecca’s dating choices: nothing more, nothing less,” they wrote. “They appear to hate that Christopher Trent was a felon with tattoos who cursed. They made repeated arguments predicated around this at closing argument. … This was done to confuse the issues, muddle the facts for the jury, and distract them from their burden.”

The defense said that the jury’s verdict only reflected a finding of guilt with the mandatory minimum sentence.

Hogue is a victim in this case too, and no one suffers more from the loss of her son than her, they said.

“Rebecca Hogue is suffering immensely with depression, anxiety, grief, and shock all of which is supported by the police reports in this case that confirmed she was grieving immensely,” the defense wrote. “This trial served nothing more than to re-traumatize a victim.”