Woman Told Friend She ‘Choked’ Stepfather and Killed Him by Giving ‘Him a Bunch of Drugs,’ Deputy Testifies 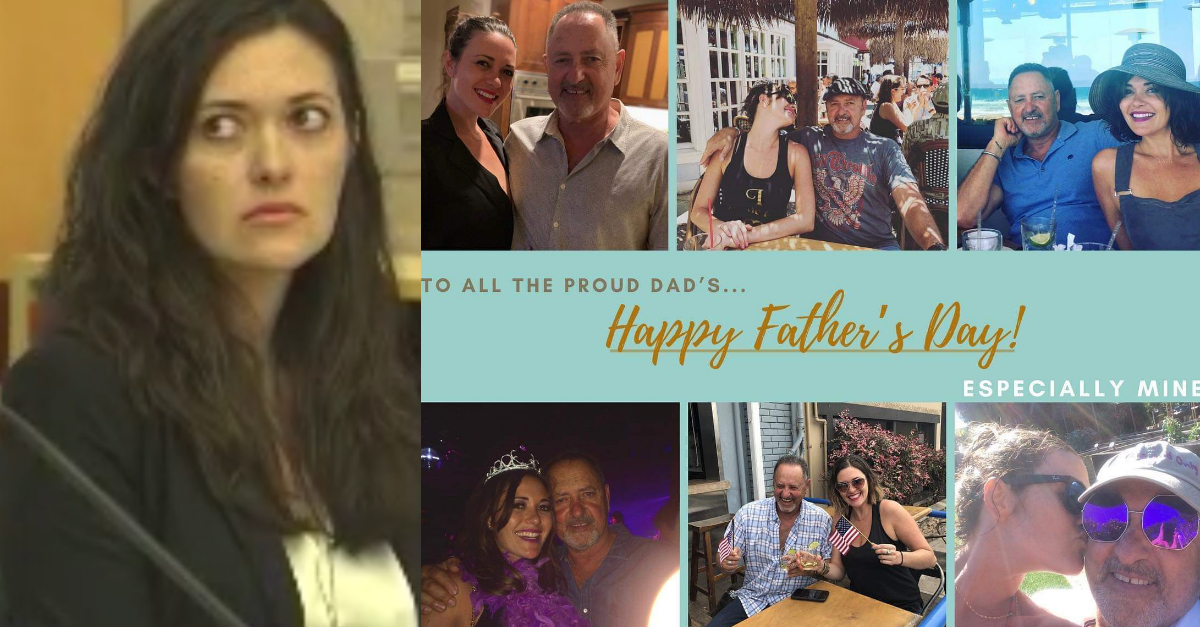 Jade Jenks (left in court on Wednesday via KNSD, right with stepfather in card posted to Facebook) will proceed to trial on charges of first-degree murder.

A California woman is heading to trial after being accused of murdering her stepfather.

Jade Janks, 38, is charged with first-degree murder in the death of her ex-stepfather Thomas Merriman, whose body was discovered by deputies with the San Diego County Sheriff’s Office during a welfare check on Jan. 1, 2021. Janks was arrested at the scene and later charged with murder. She has entered a plea of not guilty.

On Wednesday, Janks was in court for a preliminary hearing in the case, which concluded with Judge Michael D. Washington’s ruling that enough probable cause existed to proceed to trial. That decision came after five witnesses took the stand on Wednesday, according to NBC San Diego affiliate KNSD. Their testimony shed light on new details in the case, much of which remains a mystery.

Deputy Sheriff Lisa Brannan, a homicide detective with the San Diego County Sheriff’s Office, was the first witness to take the stand. She testified about how authorities were tipped off about the alleged homicide and details of what they describe as Janks’ confession to a close friend.

It was the friend Janks confided in, Adam Spiliac, who would in turn tip-off authorities, according to Brannan.

Brannan says Sipliac told her he received a call from Janks on Dec. 31, 2020, around noon telling him Merriman was in her driveway on drugs and that she needed help getting him home. Sipliac told her he was busy and couldn’t make it, but eventually went over to Janks’ home around 7 p.m.

According to Brannan, Janks told Sipliac that she had found pictures of herself on Merriman’s computer and that she felt he was obsessed with her.

While Sipliac was over, Brannan says, Janks confessed to murdering Merriman.

“Ms. Janks told Mr. Sipliac that she killed her stepfather and she said, ‘I suffocated him with a bag and I choked him,'” said Brannan. “She also said that she gave him a bunch of drugs.”

According to Brannan, Janks then wanted Sipliac’s help in covering up the murder.

Brannan says Sipliac told her he refused to help Janks. He then smoked a cigarette with Janks [and] hugged and kissed her before leaving.

The defense reportedly tried to attack Spiliac’s character while cross-examining the witness, though he was not the person on the stand.

Lawyers for Janks argued that Spiliac is a drug addict who is obsessed with their client.

According to KNSD, Detective Matthew Gibson also took the stand and testified about the events of Jan. 1:

According to Gibson, Merriman’s body wasn’t found until 7 a.m. on January 2. Gibson said the body was found in a pile of trash in the driveway area between Janks’ and Merriman’s home. According to the detective, the two were neighbors.

Gibson also noted that Janks maintained a calm and cool demeanor while authorities searched her property and after her arrest.

Dr. Pizarro, the deputy medical examiner for San Diego County, testified that the cause of death in the case was acute zolpidem intoxication, according to the report.

Court records suggest that Merriman and Janks’ mother had a contentious relationship, with the pair filing for divorce three times (image via California Superior Court)

Court records suggest that Merriman had a tumultuous relationship with his ex-wife. The couple filed for divorce in 2002, 2006, and 2008.

Those records also reveal that Janks has a half-brother Cash, who is the son of Merriman and her mother. Janks also seemed to view Merriman as a father figure, posting a tribute to him on Father’s Day just six months before his death.

Janks is facing the possibility of life in prison, if convicted of murder.