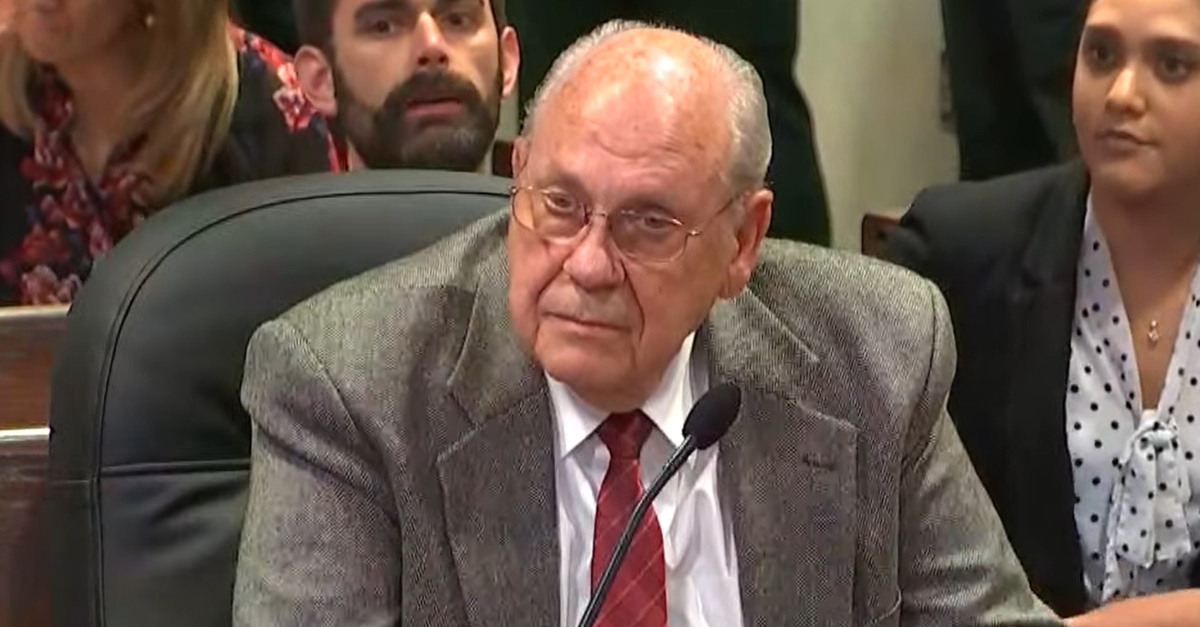 Retired police Capt. Curtis Reeves, 79, was acquitted of murdering Chad Oulson, 43, in a movie theater. It all started when the older man complained about the younger man using a phone during previews for the film Lone Survivor. It escalated to Reeves shooting and killing Oulson after the 43-year-old grabbed the older man’s popcorn and threw it at him.

The question before jurors was whether the law enforcement veteran really feared for his life, or whether, as the state put it, he was firing out of anger.

“He was explosive, and he was mad about the popcorn,” prosecutor Scott Rosenwasser told jurors in closing arguments on Friday.

Reeves denied in testimony that he even noticed the popcorn before opening fire and killing the Navy veteran.

Reeves says he had no idea popcorn was involved.

The general sequence of events is that Reeves complained about the phone usage, left to get a manager, and returned to his seat before the confrontation reached its tragic conclusion. The prosecution maintained it was Reeves who kept instigating, even after Oulson put away the phone and tried to ignore him.

Though Oulson “flicked” the popcorn at Reeves, his hand was reaching back when the older man opened fire, the prosecutor said.

The same round that killed 43-year-old also struck his wife Nicole Oulson in the hand.

“You don’t judge a person until you have walked a mile in their shoes,” defense lawyer Richard Escobar said. He spend much of closing arguments highlighting the career, training, and accolades of Reeves, who was 71 during the Jan. 13, 2014 shooting in Pasco County, Florida.

He construed Oulson’s behavior during the incident as aggressive.

WATCH: Defense attorney Richard Escobar repeatedly uses the F-word in court to give the jury a sense of what was said during a fatal movie theater confrontation between Curtis Reeves and Chad Oulson on January 13, 2014. @LawCrimeNetwork pic.twitter.com/0xbD65vDOK

According to the defense, Curtis Reeves was not a “trigger-happy” retired police officer because he never fired a weapon in his 27-year career in law enforcement. @LawCrimeNetwork pic.twitter.com/SUk65eXKh4

Rosenwasser maintained that defense testimony, including from Reeves’ daughter, overstated the supposed frailness of the retired police captain, who was trained in karate. For example, Reeves was hunting and going up trees the week before the shooting, the prosecution said.

Daughter Jennifer Shaw testified that her father, who never asked for help, requested aid in separating kayak paddles. She feared he was deteriorating. But Rosenwasser said that it turned out that these paddles were just stuck together, twisted. He said Shaw was not a bad person, but she was not a credible witness because she was too close to the defendant.

The prosecutor maintained that Reeves was just acting from his temper and shifted stories during the sheriff’s office investigation.