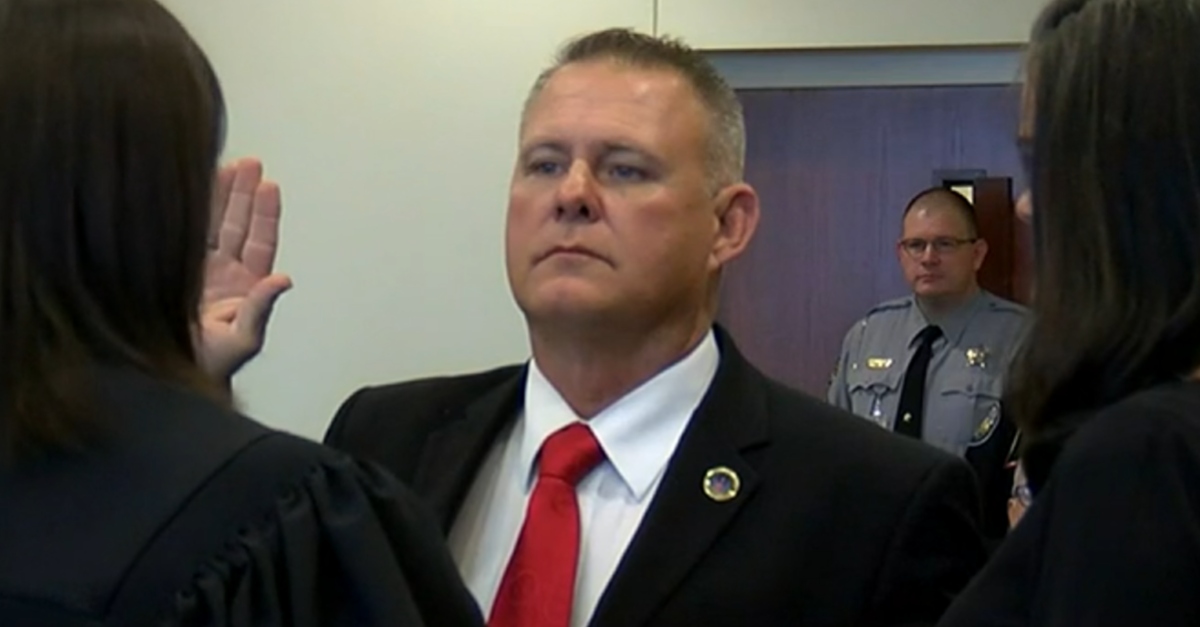 A recording caught a North Carolina sheriff ranting about “Black bastards,” including a political rival.

“I’m sick of it,” Columbus County Sheriff Jody Greene said, according to audio obtained by North Carolina outlet WECT. “I’m sick of these Black bastards. I’m going to clean house and be done with it. And we’ll start from there.”

That was in early February 2019, said then-interim Sheriff Jason Soles. Greene beat Sheriff Lewis Hatcher in 2018 by only 34 votes, but he was out of office for a time because of questions over his actual residency and because he was sworn in before the state certified election results. Soles said, however, that Greene called late one night to rant about Hatcher, who is Black, as well as other Black employees. He claimed someone in the office was leaking information to Hatcher, who had sued to keep his office.

“Tomorrow’s gonna be a new f**king day,” Greene said. “I’m still the motherf**king sheriff, and I’ll go up and fire every godd**n [inaudible]. F**k them Black bastards. They think I’m scared? They’re stupid. I don’t know what else to do it. So it’s just time to clean them out. There’s a snitch in there somewhere telling what we are doing. And I’m not gonna have it. I’m not going to have it.”

Greene also geared his ire toward Sgt. Melvin Campbell, who is also Black.

“We’ll cut the snake’s head f**king off. Period,” Greene said. “And Melvin Campbell is as big a snake as Lewis Hatcher ever dared to be. Every Black that I know, you need to fire him to start with, he’s a snake.”

Greene reportedly said on the recording that he contacted Verizon to get phone records, so he could find the leak in the office by seeing if anybody called or received calls from Lewis Hatcher or Melvin Campbell in the previous two months. He also ranted about his distrust for a woman named “Clarity,” apparently in reference to then-detention officer Augustine Clarida, according to WECT. She is Black.

Soles, who is now running against Greene for office, said he started recording after hearing a troubling statement.

“This one particular phone call that [I] received, he made the comment that he hated Democrats,” he said. “And then he said, ‘I take that back. I hate a black f***ing Democrat.’ And, and I knew right then, I was like, ‘Wow, this is coming from the sheriff.’ And, I had to start recording those conversations.”

Soles voiced concern that this showed that Greene would be biased against both Black employees of the Columbus County Sheriff’s Office as well as Black residents.

After taking office, Greene reportedly demoted both Black members of the sheriff’s office command staff. Lt. Jeremy Barber, who used to be lead detective, was bumped down to the civil division. Capt. Clementine Thompson was fired as Greene initially cut her pay by $10,000. There are no more minorities in the command staff, WECT reported.

The outlet said they first contacted Soles about the audio after a source tipped them off about it. Soles, who is white and had been a captain at the sheriff’s office, maintained he did not want to bring this to the media in part because he did not want people to think this was politically motivated. He focused instead on contacting other officials about it, such as the FBI.

“I didn’t want to do this to begin with, you know, I wanted help,” he said. “I wanted to do it the right way. And I have reached out to everyone that I know to reach out to. I’ve even tried to get to the governor. I started at the bottom of the commissioners and worked all the way to the top to the AG’s office and the governor’s office. But I just can’t get seem to get any help. And so I’m reaching out to you guys.”

There was also the County Commissioners, but only commissioner Buddy Byrd got in touch with Soles about the recording.

“Everybody had deaf ears,” Byrd told the outlet. The other commissioners are mostly supporters of Greene, according to WECT. (Prosecutors dropped a Columbus County case against Byrd in 2020 for allegedly stealing a barn, saying they lacked proof that Byrd was told the barn belonged to a company.)

Soles’ efforts were largely to no avail until recently after WECT started looking into the story. The North Carolina State Bureau of Investigation is now investigating.

Greene denied being racist. He at first cast doubt on the recording when the outlet first spoke to him.

“Absolutely not, I do not recall that. And it says what?” Greene told the outlet about the recording. “Is it me? What does it say I said?”

In a statement posted to the sheriff’s office Facebook account, Greene later said he used “expletive language but deny using it with malice intent.” He accused Soles of stoking racial tensions for political benefit.