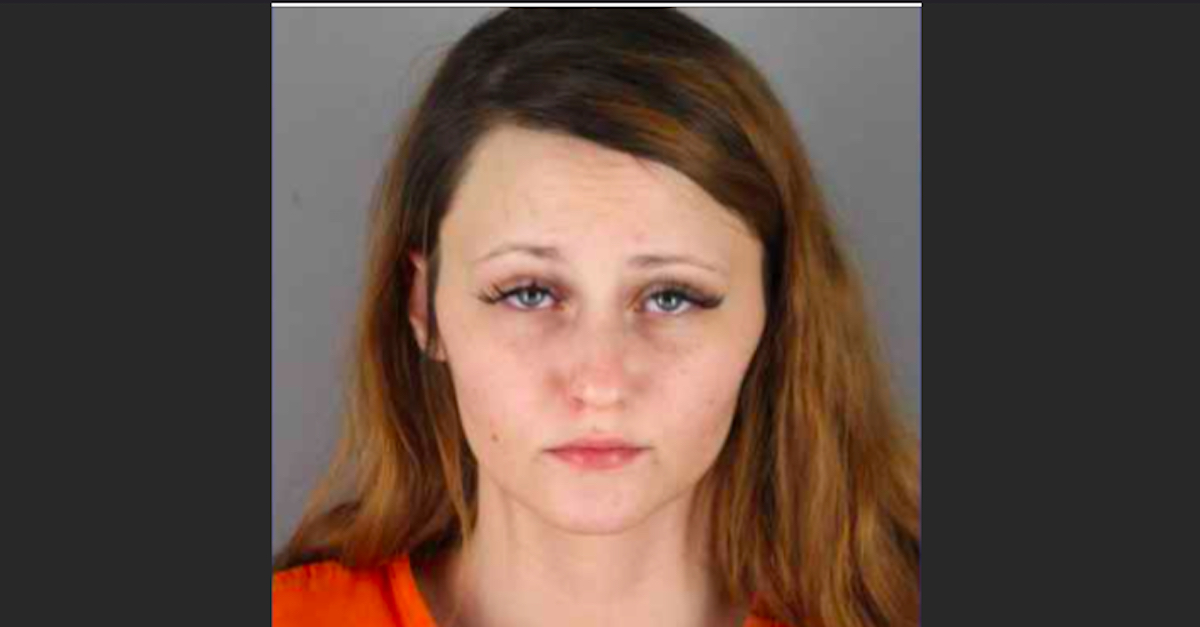 A Minnesota mother was arrested this week after authorities say she went on an alcohol-induced bender, viciously beat her infant son to death, and then tried to take her own life. Addison Perdew, 23, of Seward, was taken into custody on Wednesday and charged with one count each of second-degree intentional murder and second-degree unintentional murder, St. Paul ABC affiliate KSTP reported.

According to a copy of the criminal complaint filed Friday in Hennepin County District Court, officers with the Minneapolis Police Department on Wednesday responded to an emergency call at a residence located in the 900 block of 22nd Avenue South. The caller reportedly told police that a baby had been “beat to death” in the apartment.

Upon arriving at the scene, first responders reportedly found Perdew inside of the apartment. She was on her knees vomiting when she allegedly told police that she had just swallowed an entire bottle of pills, per the complaint. The document did not specify what kind of pills Perdew allegedly ingested.

The officers asked Perdew about the location of her 2-month-old child, and she reportedly directed them toward the back of the apartment, which was in disarray.

“A small leg was poking out from under a blanket on a bed,” the document said (per KSTP’s telling of its contents). “There, police found a naked baby boy with dried blood around his nose and mouth, bruising spanning his arms, legs, torso and head. He was cold to the touch and police pronounced the infant dead at the scene.”

In further searching the apartment, investigators reportedly found vomit in several areas, blankets thrown about, blinds ripped from the windows, a broken mirror, and a bottle of Bacardi Rum that was nearly empty.

The Hennepin County Medical Examiner was called to the apartment. An autopsy performed the following day reportedly determined that the baby’s death was a homicide caused by multiple blunt force injuries. KSTP reported that the infant’s injuries included two collapsed lungs, brain hemorrhaging, lung hemorrhaging, a broken clavicle, 33 rib fractures, a lacerated liver, and multiple fractures of the skull.

The complaint reportedly stated that her right hand was extremely swollen and discolored, appearing “very dark red” from bruising.

Due to her claim about taking a full bottle of pills, authorities initially transported Perdew to the Hennepin County Medical Center. After being read her Miranda rights, she allegedly told investigators that she was blacked out and had no memory of what happened — but she confirmed that she “was the only one there and must have done it.”

Investigators searched Perdew’s cell phone and reportedly discovered a series of incriminating messages and videos in which she threatens and later admits to killing her baby.

Another video reportedly showed the child with a bloody nose.

Police reportedly said that they also found text messages from Perdew which stated, among other things, “Im bout to kill him,” “im angry asf n I pop him on the mouth,” “im gonna slit his throat,” and “im gonna choke him,” per KSTP.

Minutes before police arrived she reportedly sent a message to someone which read, “I’m not going to prison n I can’t bring him back to life.”

Perdew is currently being held in Hennepin County Jail on $1 million bond. She is next scheduled to appear before a judge in December.

She is facing a maximum sentence of 40 years in prison if convicted of the charge of second-degree murder.