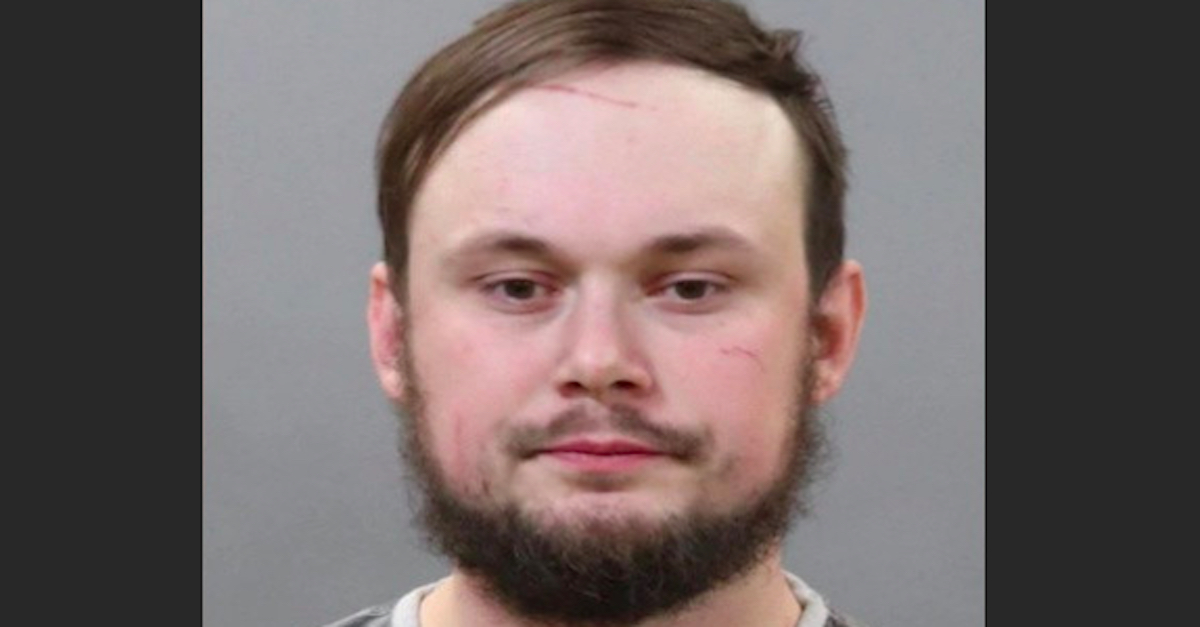 A mother in Tennessee came home earlier this month to a shockingly disturbing surprise when she walked in the front door and discovered a strange man was inside the apartment with her daughter—and he was naked, save for a pair of Air Jordan sneakers that were intended as a Christmas present for the little girl.

Michael T. Henegar, a wanted sex offender, was arrested last week after he allegedly broke into the home of Daphne Crowley then fled during the bungled burglary attempt, Knoxville CBS affiliate WVLT reported.

According to the report, the 27-year-old Henegar allegedly entered Crowley’s apartment without permission by going through an unlocked rear door at approximately 12:25 pm on Dec. 19. Upon entering the home, he allegedly picked up a child’s Scooby-Doo backpack and placed a Milwaukee M18 impact drill, a Dewalt 20-volt handheld work light, and a toothbrush and toothpaste belonging to Crowley’s granddaughter into the bag. He is also accused of taking a pair of children’s shoes and putting them on during the burglary. While it was not immediately clear if Henegar was clothed at the time of the break-in, Crowley said the children’s shoes—a brand new pair of Nike Air Jordan sneakers—were the only thing he had on his body when she saw him in the house.

“I’m calm now, but at the time I was literally shaking and cried because it’s scary. You think these people are in your house and they are sex offenders and you have your kids running around and you’re thinking you’re safe,” Crowley said in an interview with WVLT after the incident.

While she may have been scared to see Henegar inside of her home, Crowley didn’t let the nude man know it. She reportedly grabbed a pair of sticks and chased him out of the house and into the woods.

“I chased him with these sticks cause had I got a hold of him, I would have beat him. But he ran down the street into this pathway,” Crowley reportedly said as she held up the aforementioned sticks.

After running the intruder off, Crowley reportedly returned home and told her daughter to call 911 and report the disconcerting break-in. Officers with the Knoxville Police Department arrived shortly after and were quickly able to locate Henegar in a wooded area near Crowley’s home and take him into custody. He was reportedly found carrying the Scooby-Doo backpack with the items allegedly stolen from Crowley’s apartment. Officers transported Henegar back to Crowley’s apartment where she and another witness reportedly both identified him as the man who was in her home without permission. He was booked and charged with aggravated burglary.

In a particularly disturbing twist, Crowley told Oakland Fox affiliate KTVU she believes that, based on the items in his possession when he was arrested, Henegar had broken into her house on several previous occasions.

“Because when they found him, they found stuff that I knew I had bought and had been looking for,” she reportedly said, specifically mentioning the toothbrush, toothpaste, and items she said had been put into stockings.

Henegar was reportedly found guilty of sexual exploitation of a child 14 years old or younger by electronic means in 2014. He has also been cited for multiple violations for failing to register as a sex offender.