‘I Apologize’: Suspect Charged with Murdering Arkansas Police Officer Says She ‘Didn’t Mean To’ Kill Him 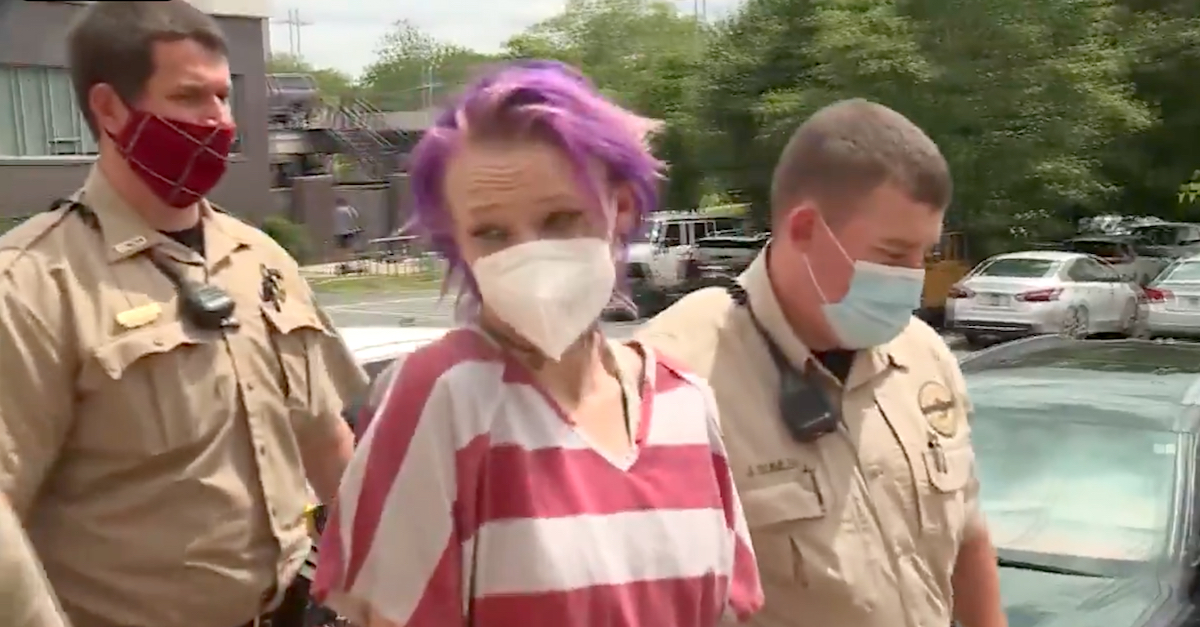 An Arkansas woman accused of running over and killing a police officer with her car while fleeing from a gas station told a local journalist that she was sorry for her actions.  The statement occurred as she was being escorted to her first court appearance Monday morning.

Video captured by television duopoly KHBS/KHOG-TV showed a shackled 22-year-old Shawna Rhae Cash — who allegedly drove the vehicle that killed Officer Kevin Apple of the Pea Ridge Police Department on Saturday — wearing a pink and white striped inmate uniform and surrounded by three officers as she made her way to a judge.

Before Cash entered the building, a reporter can be heard asking, “Shawna, do you have anything to say about what happened on Saturday night?”

“I apologize; I didn’t mean to,” Cash responded while also shrugging her shoulders.

“I apologize, I didn’t mean to,” Shawna Cash told reporters on her way to court. Cash is accused of running over and killing Pea Ridge Officer Kevin Apple. https://t.co/Px1ViEC0jY#ShawnaCash #KevinApple pic.twitter.com/G6dW7EeIAB

According to the stations’ report, the courthouse was “packed” with officers from the Pea Ridge Police Department as well as members of Officer Apple’s family, all of whom watched as a judge denied bond for Cash and 18-year-old Elijah Andazola Sr., who was also arrested in connection with Apple’s death.

As previously reported by Law&Crime, Apple and Officer Brian Stamps were responding to a call about an older-model blue Jeep fleeing from police in the city of Rogers, Arkansas on Saturday evening.

Rogers is about fifteen minutes south of Pea Ridge.  The two municipalities are in northwestern Arkansas near the Missouri border.

Apple and Stamps soon located the vehicle parked at the gas pumps of a convenience store. The officers stopped at either end of the Jeep in an attempt to box it in; they then tried to speak with the people inside. The Jeep then rammed one of the police vehicles before running over Apple, dragging him upwards of 100 feet, police said.

Cash and Andazola are both facing charges of capital murder and fleeing on foot. Andazola is charged with refusal to submit to arrest. Cash is charged with improper use of registration, driving with a suspended or revoked license, reckless driving, aggravated assault, and criminal mischief. The two were being housed at Benton County Jail as of Monday morning, online records show.

Since both defendants are eighteen years of age or older, they are both eligible for the death penalty if convicted as charged of capital murder.  The other possible punishment for capital murder under Arkansas law is life in prison without parole.

Officer Apple had spent three years with Pea Ridge police and 23 years total in law enforcement, officers have said. A local police union has been accepting donations on behalf of his family as well meals for local officers.

Funeral services for the fallen officer are scheduled Friday at Cross Church in Rogers, Ark., according to the television stations.

Pea Ridge Lt. Michael Lisenbee said his department is “expecting a huge turnout” at those services and suggested those who wished to attend should make carpooling arrangements.

Alberto Luperon and Aaron Keller contributed to this report.