Arkansas Police Officer Was Run Over and Killed When Trying to Confront Duo in Wanted Jeep: Authorities

Arkansas police are mourning after one of their own was killed while trying to stop a fleeing vehicle. Officer Kevin Apple of the Pea Ridge Police Department in Arkansas died Saturday, authorities said. Shawna Rhae Cash, 22, and Elijah Andazola Sr., 18, were arrested in this incident.

Pea Ridge is in northwestern Arkansas along the Missouri border.

Apple and Stamps found that vehicle parked at the gas pumps of a convenience store. The officers stopped at either end of it and tried to speak with the people inside. But the Jeep rammed one of the police vehicles and ran over Apple, dragging him, police said.

Images shared online showed the damaged vehicle draped in flowers and flags, including an American flag styled with a thin blue line.

“Our department is in shock right now,” Lisenbee reportedly said. “We’re a home town. Everyone in our Police Department are family.”

Cash and Andazola were later arrested. 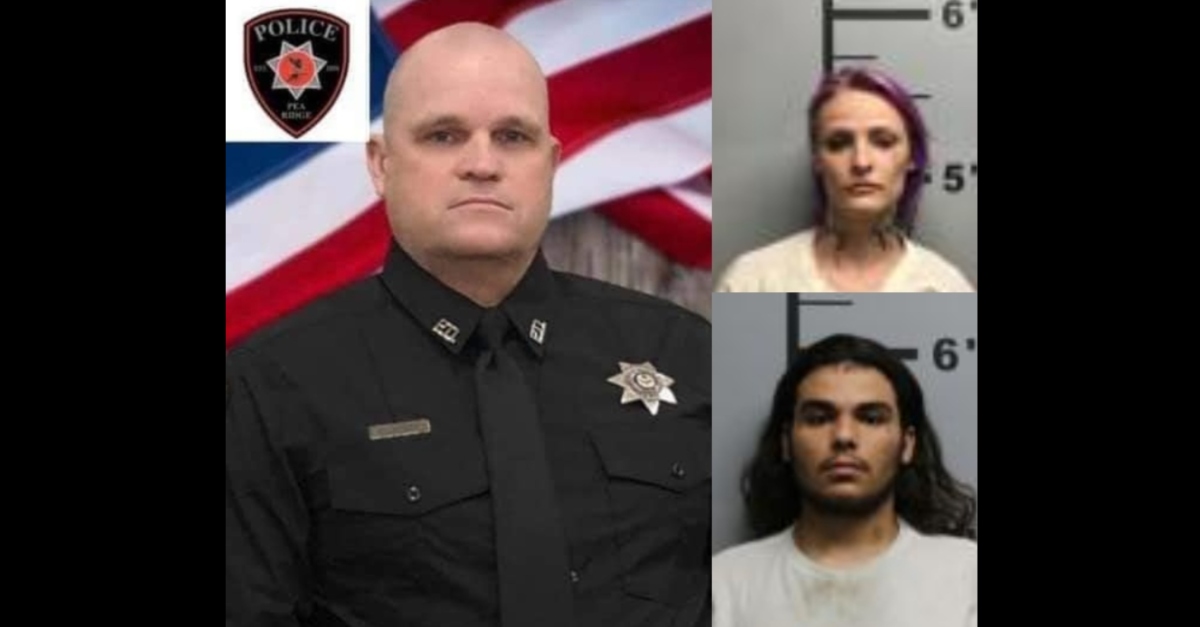 “I am deeply saddened to hear of the loss of Pea Ridge police officer Kevin Apple,” Arkansas Governor Asa Hutchinson (R) tweeted Saturday evening. “My prayers are with Officer Apple’s family and the entire Pea Ridge community during this time. I have ordered flags to be flown at half-staff in tribute to Officer Apple.”

Apple had spent three years with Pea Ridge police and 23 in law enforcement, officers reportedly said. A local police union has been accepting donations on behalf of his family as well meals for local officers. From the Pea Ridge Fraternal Order of Police Lodge #88:

Pea Ridge FOP currently has a donations account. Stop by any Arvest [Bank] location, and ask to donate to the Pea Ridge Fraternal Order of Police Lodge 88 relief account (ending in 2155). All money donated to that account will be towards all the needs of Officer Apple’s family.

In the coming days, many of Pea Ridge’s finest will be off work and grieving. Pea Ridge officers may not be returning to work until the end of the week. If you’d like to bring food or meals for our officers please coordinate them through Police Clerk/Officer Cassey Henson. She can be reached by direct message through the Pea Ridge FOP account or at [email protected] This way meals can be coordinated and scheduled.

Cash and Andazola remain at the Benton County Jail as of Monday morning, online records show. Both are charged with capital murder and fleeing on foot. Andazola is charged with refusal to submit to arrest. Cash is charged with improper use of registration, driving with a suspended or revoked license, reckless driving, aggravated assault and criminal mischief. A bond hearing is scheduled for this week.

“He certainly has honored his community by sacrificing his own life in their service,” Smith said in a report by television stations KHBS and KHOG.

Since both defendants are eighteen years of age or older, they are both eligible for the death penalty if convicted as charged of capital murder.  The other possible punishment for capital murder in the Natural State is life in prison without parole.

[Image of Apple via the Pea Ridge Fraternal Order of Police Lodge #88; images of Cash and Andazola via mugshots]