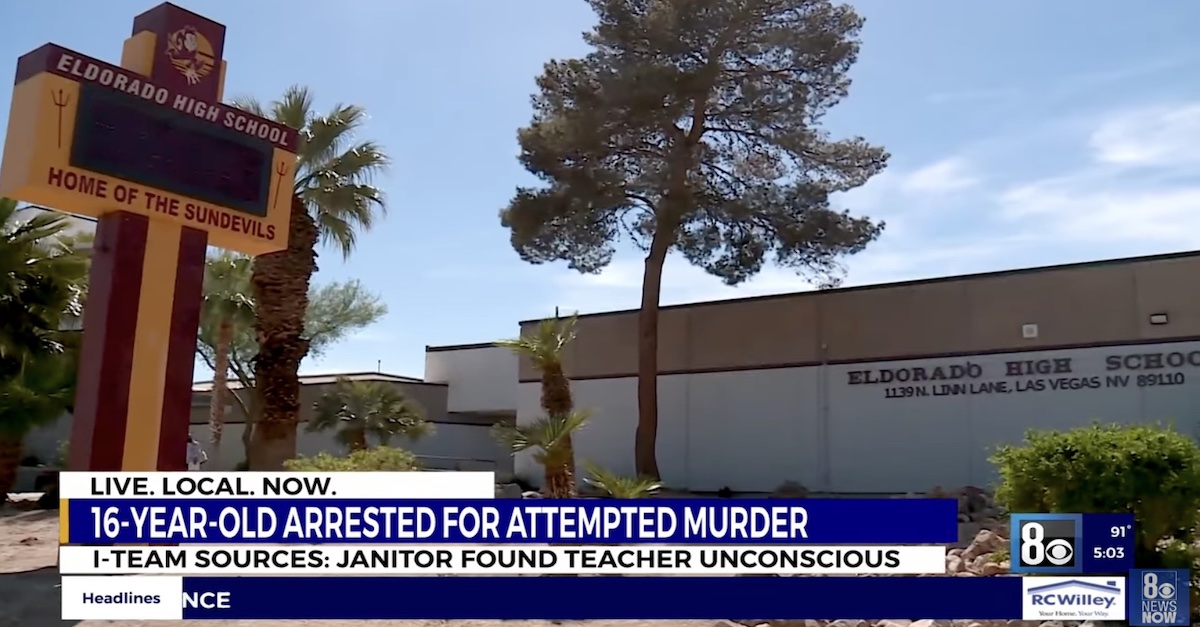 A high school student in Las Vegas who allegedly “got violent” with his teacher over his grades has been arrested for attempted murder and sexual assault.

According to a statement from the Las Vegas Metropolitan Police Department, officers were called to a classroom following reports of an “injured teacher.”

“Arriving officers were directed to a classroom where a female was being treated by medical personnel for multiple injuries,” the statement said, adding that the victim was taken to the hospital in stable condition.

“The investigation by the LVMPD Sexual Assault Section indicated that the teacher was in her classroom when a 16-year-old student entered to talk about his grades,” the statement said. “At some point, the suspect got violent and began punching the victim and strangled her until she lost consciousness.”

The student then reportedly fled the classroom, and the teacher was discovered by another school employee.

Police said that they were able to identify the suspect and take him into custody “without incident.” He was charged with attempted murder, sexual assault, battery with intent to commit sexual assault, first degree kidnapping, and robbery, the statement said.

Police have not publicly identified the student allegedly involved in the attack or the teacher. Clark County School District Superintendent Jesus Jara has confirmed that the incident took place at Eldorado High School, and has issued a statement saying that he is “devastated” by the violent alleged attack.

“The safety of every Clark County School District (CCSD) student and employee is our top priority,” Jara said, according to a report by local NBC affiliate KSNV. “I am devastated, and the CCSD family hurts for the teacher assaulted at Eldorado High School. Our hearts are heavy because of the violence committed against her, and we pray for her full recovery.”

In the statement, Jara said that such violence, assaults, and bullying “will not be tolerated in the Clark County School District, and those who choose to engage in these activities will be prosecuted to the fullest extent of the law.”

Nevada Gov. Steve Sisolak (D) responded to reports of the attack on Twitter.

“This is an absolutely tragic and horrendous situation,” Sisolak said. “My entire family is sending our love, thoughts and prayers to this teacher as she recovers from the brutal attack, and we are glad to hear she is in stable condition.”

This is an absolutely tragic and horrendous situation. My entire family is sending our love, thoughts and prayers to this teacher as she recovers from the brutal attack, and we are glad to hear she is in stable condition. https://t.co/K97dQUJNgb

Vicki Kreidel, the president of the National Education Association of Southern Nevada, posted on Facebook that she is “absolutely devastated” for the teacher, and called for an increased focused on safety in schools.

“I am absolutely devastated for the teacher at El Dorado,” Kreidel’s post said. “Educator and student safety must be addressed NOW. And if our Supt won’t do anything we need to stand together and demand it. I think this is something everyone can agree on. This is unacceptable!”

Kreidel is organizing a protest, planned for Wednesday, in response to the assault.