‘He Just Starts Hitting Him’: Woman Breaks into Tears Testifying Against Husband Who Allegedly Murdered Her Co-Worker Over Snapchat Messages 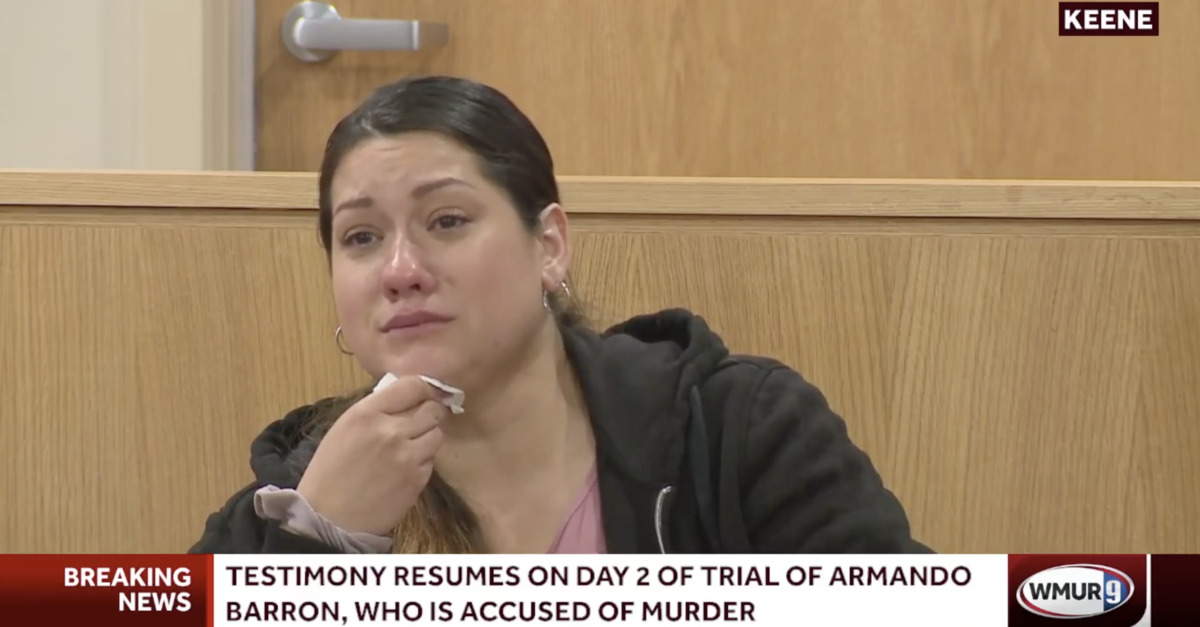 A New Hampshire woman sobbed through testimony implicating her husband as the man who brutally murdered her co-worker in a Massachusetts park one chilly evening in September 2020.

On Sept. 20, 2020, 25-year-old Jonathan Amerault was ambushed, attacked, and ultimately killed in a park just across state lines. Armando Barron, 32, stands accused of orchestrating and carrying out that violent murder. The state says the defendant was motivated by jealous rage after discovering his wife of several years, 33-year-old Britany Barron, was messaging with the victim.

The defense claims, oppositely, that Britany Barron is responsible for it all.

Prosecutors in the trial have documented a horrific scene in which Amerault was viciously attacked by Armando Barron, who then tried to force his wife to shoot her co-worker. She allegedly refused but was forced to stand on the victim’s neck and slit his wrists, they said.

“Did you shoot Jonathan Amerault?”

“No, I did not,” Britany Barron replied.

“Who shot Jonathan?” the prosecutor pressed.

One week before the murder, Britany Barron told jurors, she had requested a divorce from her husband and told him that she didn’t love him anymore.

On the night of the murder, Britany Barron said, her husband went through her phone and discovered a Snapchat conversation between herself and the eventual victim.

“Are you serious?” Armando Barron allegedly said as he initially confronted his wife about the conversation in the bathroom of their home. “Are you fucking serious right now, Brit?”

Then he allegedly grabbed her by the throat and slammed her to the floor while choking her on and off for several minutes, she said, her eyes welling with tears as she described an intense and sustained attack as she struggled to breathe and scream. Eventually, Britany Barron said, her husband dragged her to the living room, continued to choke her, took her to the bedroom and shut the door.

At that moment, she said, Armando Barron yelled out to the couple’s children to go next door to their grandmother’s house.

After shutting the door, Britany Barron said, her husband began punching her in the face “over and over again so I wouldn’t scream.”

Eventually, she said, the plan for the murder began.

The defendant then made sure to tell his mother that they would “be back” before they drove off, the witness said.

Britany Baron said she made eye contact with her daughter and mother-in-law just before the fateful departure.

“He had me at gunpoint,” she continued through a wellspring of tears, tissue in hand, “He said, ‘Don’t do anything stupid or the girls are going to walk into something fucking gruesome.'”

While the two were sitting in the car at a park, she said, Armando told her: “We’re gonna message your little boyfriend.”

“I was like, ‘Wait, wait, wait,” Britany Barron told jurors–saying she was concerned at the suggestion since she thought it was her life about to end. Then, Armando Barron, using his wife’s phone, texted the victim to meet at the park, she said, insisting she didn’t send the message. She told jurors that internally she was hoping that Amerault wouldn’t answer his phone after being messaged by her husband. But he did.

During the beating, Britany Barron told jurors, the victim fell to the ground. After that, she said, he was repeatedly kicked by her husband. She said he stomped on Amerault’s face at least once.

Later, with the gun pointed at her, the witness alleged, she was forced to take part in the beating and ultimately cut her co-worker. But, she maintained, she still refused to deliver the fatal shot.

“Kill him,” her husband allegedly said. “Shoot him. Do it.”

“I thought you were going to let me live,” Amerault said as he was forced into the trunk of his own hatchback, Britany Barron said.

Armando Barron then allegedly shot the victim three times and said: “I guess that makes both of us liars.”