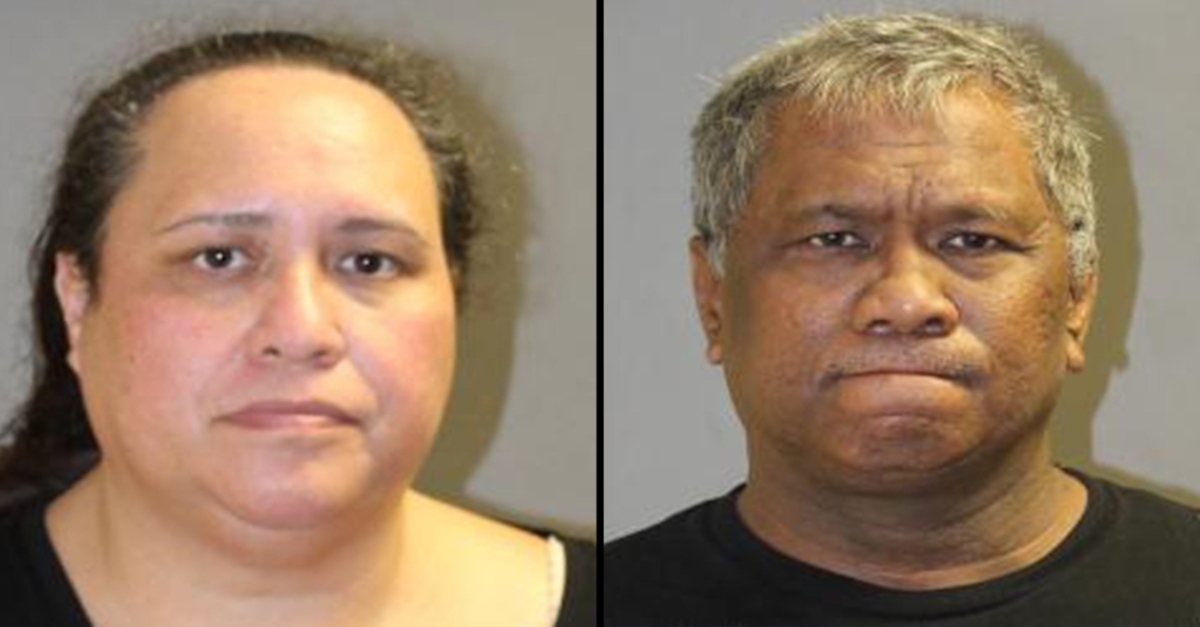 Horrific new accusations of torture and child abuse have emerged in the case of a married Hawaiian couple charged with murdering their 6-year-old adopted daughter. Newly released court documents allege that Lehua Kalua, 43, and her husband, Isaac K. Kalua III, 52, intentionally starved their daughter, Isabella “Ariel” Kalua, and kept her locked up in a dog cage bound and gagged with duct tape to prevent her from foraging for sustenance in the night.

The two on Friday appeared remotely in court from the Oahu Community Correctional Center. They each pleaded not guilty to charges of second-degree murder in Isabella’s presumed death. At the same time, investigators with the Honolulu Police Department were reportedly at the couple’s home located in the 41000 block of Puha Street in Waimanalo continuing to search the property for the child’s presumed remains — which have not yet been found.

The couple in mid-September triggered a massive multi-agency search for Isabella—whom they adopted approximately two years ago—when they reported her missing. They told the police that the girl had vanished in the night. But a subsequent investigation revealed that Isabella hasn’t been seen since August 18, which is when police believe she was killed and her body disposed of.

According to a police affidavit filed Friday in Honolulu’s First Circuit Family Court, Det. Shayne Iwamoto on Nov. 5 interviewed Isabella’s 12-year-old sister, who told him that “she was asked to keep a secret by Lehua and Isaac regarding what happened” to her little sister.

Lehua allegedly put Isabella in a cold bathtub to try and wake her up but when that didn’t work, the sister said she woke up Isaac. Two other children identified as I.L.K. and A.J. were also in the home at the time but were asleep.

Police said the sister told them she had been keeping the secret for approximately two months but “knows [Isabella] is dead because she was there” and was forced to help Lehua move Isabella’s body from the bathroom to her bedroom.

Investigators believe Isaac then faked contracting COVID-19 to get out of work so the Kaluas could get rid of Isabella’s body. Police say he took off from work for approximately two weeks beginning on Aug. 20 and even went to the hospital to seek treatment.

Per Isabella’s sister, a few days later, “Isaac went to Kaiser to ‘pretend that he was COVID,’” the document states. “[The sister] stated that she knew Isaac was pretending because she knows that he took off work to ‘help mom.’ When asked why Isaac would need to help mom, [the sister] stated ‘to get rid of the stuff . . . evidence.’”

The dog cage that was allegedly used to hold Isabella was purchased from the internet—despite the family not having a dog—”because [Isabella] would sneak around at night and want to eat because she was hungry” as “Lehua would not feed her,” the sister said, adding that Lehua purchased the cage specifically “to keep [Isabella] inside of it at night.”

The torturous abuse of Isabella at the hands of her parents happened regularly, the sister told investigators, saying she’d seen Lehua “put duct tape” on her little sister “plenty of times” and Isaac was well aware of the tactic.

A judge on Friday ruled that the Kalluas are to remain in pretrial detention without bond after prosecutors argued that they were a flight risk.

Read the full affidavit below for additional information: