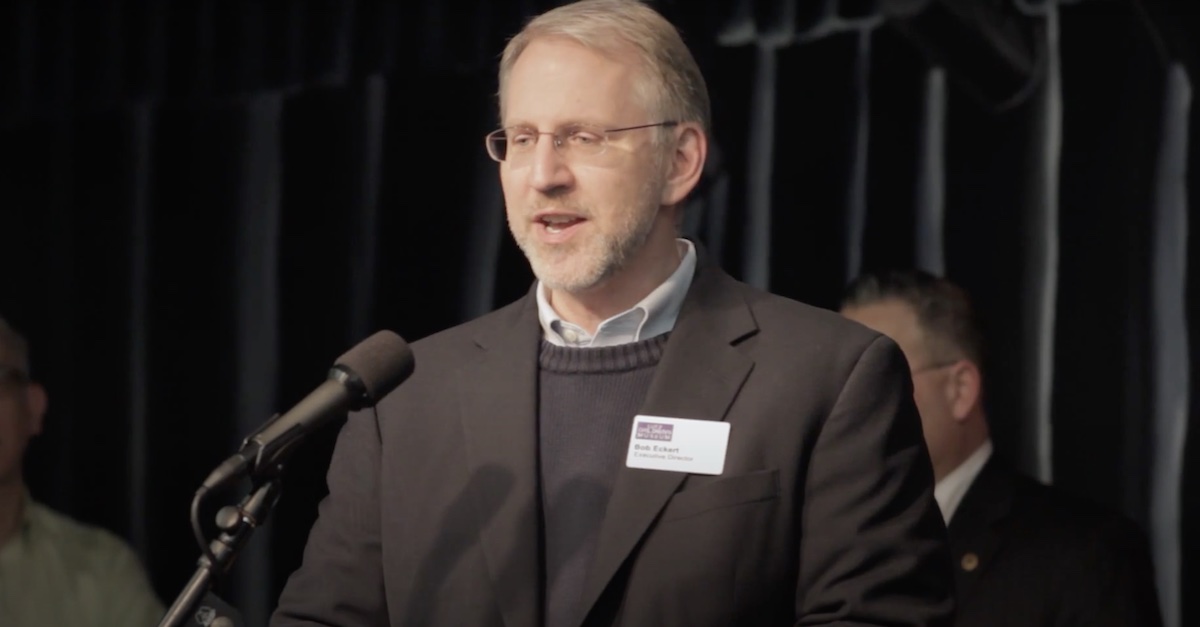 Robert Eckert, pictured speaking in 2014 at a Groundhog Day event.

A 56-year-old West Hartford, Connecticut man and former executive director of the Lutz Children’s Museum pleaded guilty in federal court on Thursday in child pornography case, stemming from his solicitation, receipt, and distribution of images and videos online, the Department of Justice announced.

Federal court records show that the case against Robert Eckert began with a sealed indictment and an arrest in April 2021. Since unsealed, the indictment alleged that Eckert, “From on or about September 25, 2019 to May 24, 2020 […] did knowingly distribute a visual depiction of child pornography […] each of which contained a visual depiction of a minor engaging in sexually explicit conduct.”

The U.S. Attorney’s Office for the District of Connecticut was more specific about how Eckert admittedly obtained and distributed the child sexual abuse images. Prosecutors also revealed how many images and videos were found in his possession.

“According to court documents and statements made in court, Eckert used multiple internet platforms, including MeWe and Kik, to solicit, receive and distribute images of child sexual abuse and to communicate with others about the distribution of child pornography. He accessed the online platforms on his phone, at his residence, and at the Lutz Children’s Museum in Manchester where he was employed as its executive director,” a DOJ press release said, mirroring the language of the plea agreement in the case. “Between September 2019 and May 2020, Eckert possessed 1,837 image files and 73 videos depicting child sex abuse, including the abuse of prepubescent minors.”

According to the plea agreement, Eckert stipulated that the defendant “distributed the images in exchange for valuable consideration, including the receipt of child pornography and access to sexually explicit groups.”

“At the time of each distribution, the defendant knew the items were child pornography,” the documents said.

The Lutz Children’s Museum, located in Manchester, Connecticut, describes its mission statement as providing a “multi-faceted museum for children to explore culture, history, and the natural sciences through internal and external exhibits, programs, and experiences.”

“The Lutz Children’s Museum was founded by the PTA in 1953 and named in her honor,” the website says. “To this day, the museum offers children educational and cultural opportunities that they may not have otherwise and gives teachers an additional source of enrichment and resource materials.”

Video from several years ago that still appears online shows Eckert introducing himself to a room full of children as the executive director at the start of a Groundhog Day event.

He referred to the children’s museum as his “favorite subject.”

Sentencing has been set for Nov. 28.

Eckert, for his part, asked the court on Aug. 31 for permission to travel and see members of his family, knowing that whatever his sentence ends up being he faces a mandatory minimum of five years in federal prison. The maximum potential punishment is 20 years behind bars.

“The Defendant has been released on bond since April 2021, on home detention. He wears an ankle monitor. He has not traveled out of state while on release, except for frequent trips into Massachusetts as part of his confirmed employment. As noted in the probation report this week, Mr. Eckert has been compliant with conditions,” the motion said. “The Defendant has a change of plea scheduled for September 1, 2022, in the afternoon. It is anticipated at that hearing he will change his plea to a count which carries a five year minimum mandatory sentence. If such a plea is entered, it is a certainty Mr. Eckert will be incarcerated for an extended period of time following sentencing.”

Eckert specifically asked that he be able to travel to Florida to attend a memorial service with his siblings on a boat for his father, who died two years ago.

The motion further said this may also be the last time before heading to prison that Eckert will be able to see a sibling with “health issues.” Eckert also requested permission to visit his mother in a Pennsylvania nursing facility with his siblings.

Records show that the judge granted Eckert’s motion to travel in part.

“The defendant may travel to Florida as described in the motion,” a minute entry says.

Law&Crime reached out to Eckert’s attorney of record for comment.

Read the indictment and plea agreement below: