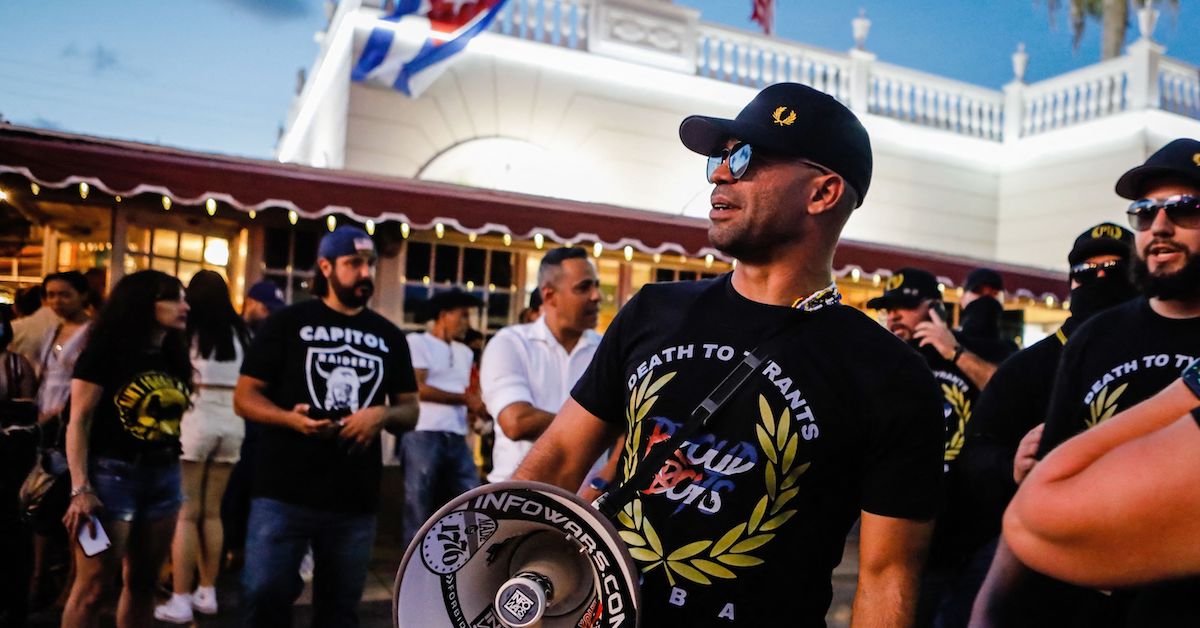 Henry “Enrique” Tarrio, leader of The Proud Boys, attends a protest showing support for Cubans demonstrating against their government, in Miami, Florida on July 16, 2021. (Photo by Eva Marie UZCATEGUI / AFP)

Proud Boys leader Henry “Enrique” Tarrio’s attorney asked a federal judge permission to withdraw from a civil lawsuit seeking to hold his client liable for the Jan. 6 attack on the U.S. Capitol.

Hours later, the request was promptly denied by a federal judge because Tarrio’s lawyer was unable to obtain written consent for the request with his client behind bars.

Currently facing prosecution for seditious conspiracy, Tarrio faces serious criminal and civil exposure over his alleged actions on Jan. 6, 2021. His attorney J. Daniel Hull now indicates that Tarrio intends to face his civil litigation by himself.

“Mr. Hull is authorized by Mr. Tarrio to represent that Tarrio consents to the withdrawal and that he will proceed in this case pro se,” the motion for withdrawal states.

Though the Proud Boys describe themselves as a “Western Chauvinist” group, watchdogs like the Anti-Defamation League identify them as bigoted extremists and the Canadian government lists them as a terrorist organization. The Justice Department indicted several of its leaders in charging papers depicting them as key planners of the Jan. 6 siege, establishing a so-called Ministry of Self-Defense in late December.

The day before the breach of the Capitol, Tarrio met with Oath Keepers leader Stewart Rhodes, who is also charged with seditious conspiracy. Filmmakers captured the meeting inside a parking garage, even though prosecutors noted that Tarrio had been ordered the previous day to leave Washington, D.C., following his arrest for stealing and burning a Black Lives Matter banner at the Asbury United Methodist Church.

Earlier this year, a federal judge denied Tarrio’s motion to dismiss a lawsuit holding him liable. The ruling found it plausible that the Proud Boys and Oath Keepers joined forces in a conspiracy.

“It is reasonable to infer that, as the leader of the Proud Boys, he would have participated in forming the announced ‘alliance’ and ‘orchestrated plan’ with the Oath Keepers,” U.S. District Judge Amit Mehta wrote in February. “He also said that the Proud Boys would be there in ‘record numbers on Jan 6th,’ would be ‘incognito,’ and would ‘spread across downtown DC in smaller teams.'”

The month after the civil ruling, Tarrio’s criminal indictment landed, and Hull said that contacting his jailed client has been challenging since that time.

“Due to Tarrio’s unexpected arrest in mid-March, criminal indictment (in 21-cr-175), his pretrial detention, and movements between several jails on the eastern seaboard, efforts to obtain the written consent preferred by LCvR 83.6 failed to bear fruit,” Hull’s motion states.

“Although the court understands counsel’s difficulty in communicating with Mr. Tarrio, there is no exception to Local Civil Rule 83.6(c)’s requirement to notify the client of the motion to withdraw,” Judge Mehta wrote in a minute order. “Should counsel not know of Mr. Tarrio’s detention facility, he may contact chambers to inquire.”

Tarrio, 38, is currently incarcerated inside the Federal Detention Center of Miami, according to the Bureau of Prisons.

In their series of public hearings earlier this year, the Jan. 6 Committee examined former President Donald Trump’s ties to extremist groups, and the Proud Boys figured prominently in those proceedings. Both the Oath Keepers and the Proud Boys used encrypted chat rooms titled “Friends of Stone,” a reference to Trump’s close associate Roger Stone, the committee noted.

Citing the publicity generated by the widely watched hearings, U.S. District Judge Timothy Kelly — a Trump appointee presiding over the criminal case — “reluctantly” agreed to postpone the trial until December.

Update—Sept. 2, 2022 at 1:21 p.m. Eastern Time: This story has been updated to include the judge’s denial of the attorney’s request.

Read the motion to withdraw here: